Largest drone ever to serve as rocket launch vehicle 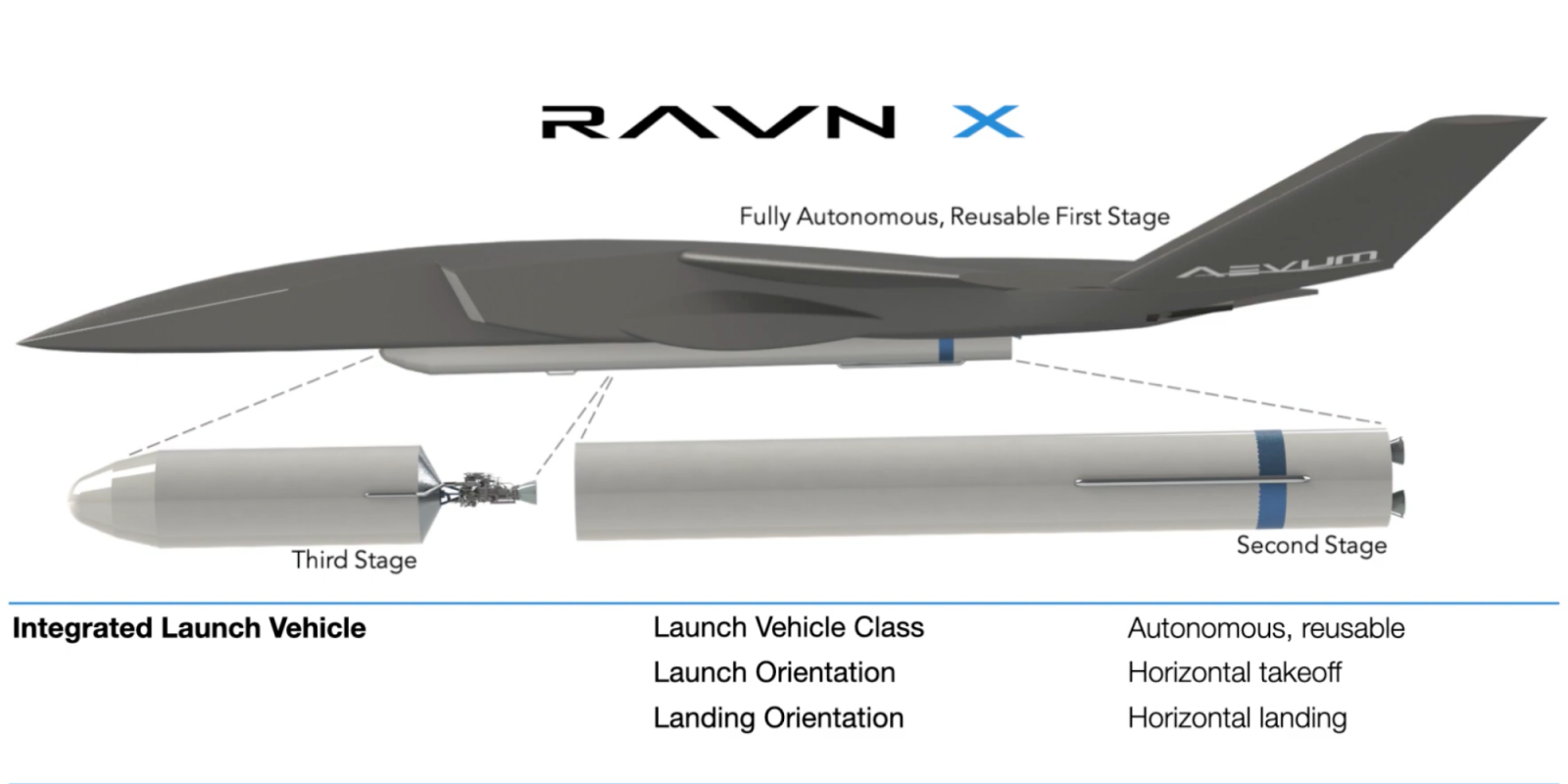 A new drone has been unveiled that its creators say is the largest such device built to date. US startup Aevum, Inc. plans to use its Ravn X as a launch vehicle for a two-stage rocket that would place low-earth orbit satellites in space.

We could spend the day Googling drone dimensions, trying to find the world’s largest drone. Or we could take the word of Aevum that its new Ravn X is the largest. And there’s no doubt: it’s pretty big. The vehicle is 80 feet long with a wingspan of 60 feet. Its maximum takeoff weight is, uh, 55,000 pounds. So yeah, that’s around the size of a jet aircraft — which is precisely what it looks like. The design is also super aerodynamic.

But this drone is all about the payload.

Designed to launch a rocket

Getting stuff to space is hard. It doesn’t matter if it’s something big or something small, the amount of energy required for a ground launch to even low earth orbit is mind-boggling. You’re taking something pretty much up to an altitude somewhere between 160 kilometers and 1,000 kilometers (100-625 miles). Plus, you need to fly at an angle that will successfully put that cargo into orbit, zipping frequently around the globe. That’s just plain hard and requires a lot of oomph.

But there’s another way to get things there. Take a small rocket. Strap it to the belly of an aircraft. Get the aircraft up as high as you can go, then drop the rocket. Have it launch from altitude, saving you all of the energy (to say nothing of infrastructure) required for a traditional ground launch.

That’s what the Ravn X is built to do.

Aevum, Inc. has been working hard on its Ravn X. And this week, it unveiled the aircraft publicly. You can scrub ahead on the video to see this aircraft.

The Ravn X is designed to take off and land on a one-mile-long runway, just like a traditional aircraft. But take a look at its payload, designed to carry small, low-earth-orbit satellites:

As you can see, this is designed as a three-stage launch system, with the Ravn X serving as the first stage. The aircraft, which can reach speeds of 575 mph, has a service ceiling of 60,000 feet. So if you get to that height and launch the rocket from there, it’s technically an easier task than trying to ground-launch a rocket.

This is precisely the same idea as Virgin Galactic is using. The space tourism company will carry SpaceShipTwo to a similar height before it’s dropped and the rocket engine fires.

A drone company with a conscience

Aevum has a fairly inspiring mission statement. The impetus behind the company is to help democratize communications tools around the planet, meaning internet access to some of those who need it most:

Aevum, Inc. was founded to provide the technologies and logistics necessary to empower people to share their stories. Right now, there are over 3.4 billion people around the world whose stories cannot be heard because they do not have access to basic digital technologies like the internet. This number also means that over 870 million children under 14 do not have access to digital resources or a way to read about the world that they share with us. The technology and resources needed by those left behind by the digital divide already exist; they just need to be delivered. Aevum can help overcome the high logistical cost of making basic technologies available with our logistics solution. On our resolve to empower people to share their stories, Aevum will not stop delivering.

Drones are all about payloads

Every drone, from DJI’s new Mini 2 all the way up the Ravn X, is all about payloads. With the Mini 2, you’re flying a camera. With the Ravn X, you’re delivering a spacecraft to its launch site at 60,000 feet.

Depending on the definition used for a drone, arguably you might call the SpaceX Falcon 9 a drone. After all, no one is piloting this aircraft; everything it does is programmed. Now, that wouldn’t fit the Unmanned Aerial Vehicle definition, but we might be splitting hairs.

Regardless, for the moment, the Ravn X is claiming its title as the world’s largest drone. And there’s no doubt this drone will be doing very big things for very important reasons.