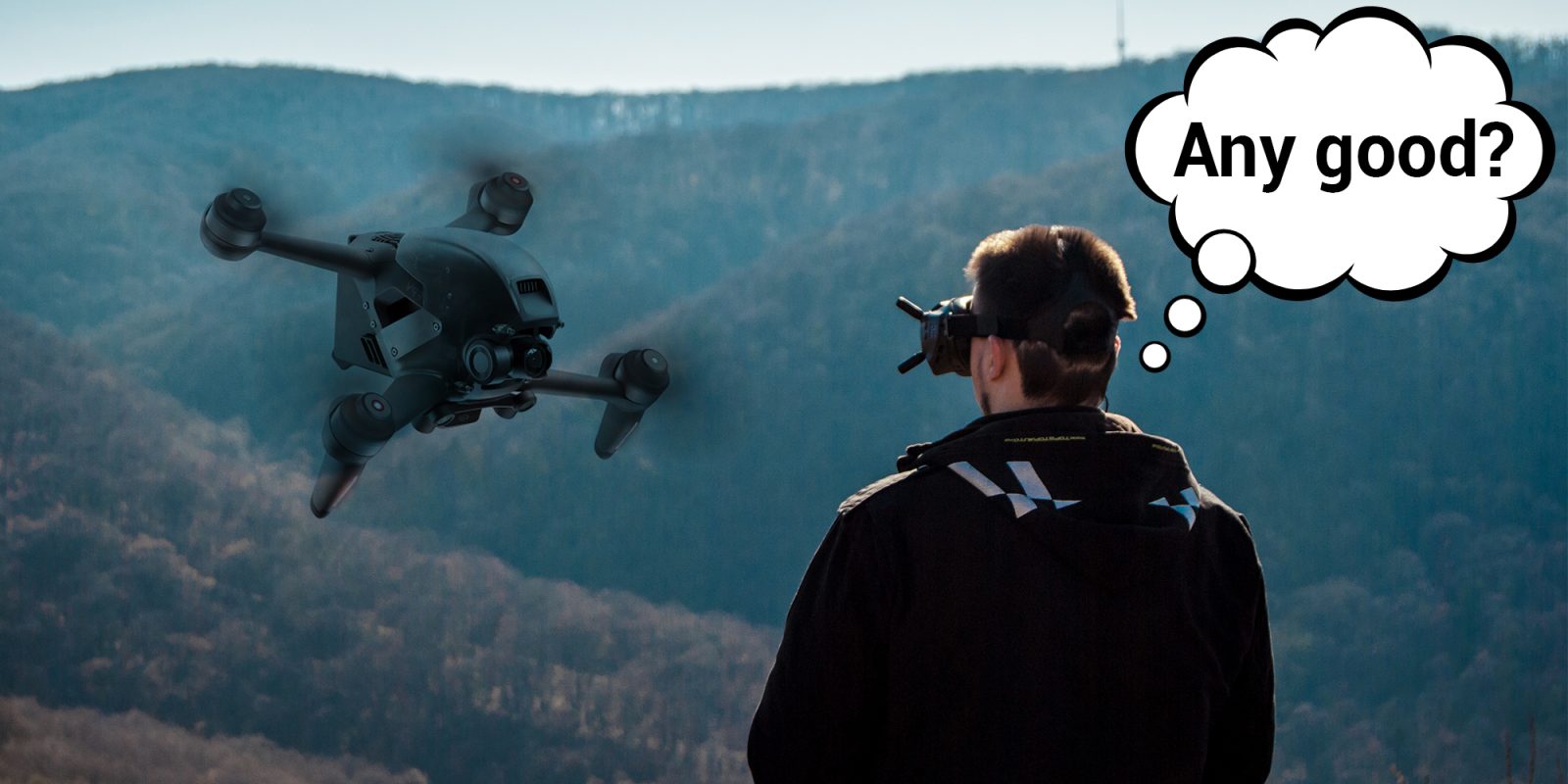 Want to start flying FPV? Is DJI’s new offering a good option? How does it compare to a traditional FPV rig? Here’s a quick overview of the new DJI FPV combo and things you should consider before buying it – all from the perspective of an experienced FPV pilot.

Earlier this month, DJI released its latest drone and first take at a commercialized, pre-built, user-friendly FPV quadcopter. With it, the company accomplished two things. First, it made FPV more easily accessible to the average consumer by removing the traditional learning curve that accompanies getting into FPV (choosing your gear; building your first quad; the trial and error; the smell of burned electronics while you learn how to build it and fly it). Second, it dropped a bomb on the FPV community on social networks, igniting heated discussions and reactions but also bringing on a wave of memes and crash pictures.

We knew it was coming. It was after all DJI’s most-leaked release ever, and now that some time has passed, the bits of dust and plastic have settled, and I’ve spent some time with it, I’d like to sum up my experience* and share my thoughts.

*Full disclosure: Take what I have to say with a grain of salt. Like the title says, I am writing this from my perspective, and I’m not the typical DJI user that this drone is meant for. Also, I borrowed the DJI FPV combo I’m reviewing from my local DJI vendor; it was not provided by DJI. Needless to say, “you break it, you buy it” is implied.

For a grand total of $1,299, you get: a Mavic-like drone that is capable of high speed, low latency acrobatic flight; a controller that’s okay for the classic Normal and Sport Mavic-like modes, but awful for the FPV Manual mode; a pair of V2 Goggles (the only good thing in the box); a tiny goggle battery that doesn’t last long enough; the charger for the ridiculously expensive drone battery; and some spare props – everything you need to get in the air right out of the box and not have to worry about how any of it works. The classic DJI experience.

As mentioned, ready to fly out of the box. Gives you a taste of the FPV experience by letting you fly through goggles. It’s so easy to fly in the Normal and Sport modes that your grandma could probably do it. Perfect altitude control and GPS hover in place, just like a Mavic, but able to go faster, but most importantly, it can stay in the air by itself without any controller input (something you can’t do with a traditional FPV drone, just let go of the throttle and take your goggles off). This only applies to Normal and Sport mode. In Manual mode, you can’t let go of the controls unless you use my favorite feature, and that’s the break (panic) button. It locks out the controls, brings the quad to an almost immediate stop, and switches it into Normal mode.

The Normal and Sport modes fly exactly as you’d expect a DJI drone to fly, with the main difference being you’re not using classic high latency cellphone/tablet attached to the remote method of controlling it. Instead, you’re using their now-developed lower latency goggle technology and, with it, getting the immersive FPV experience.

So far, I’ve praised this drone for being an acro capable “FPV Mavic,” which it excels at, and before I continue I’ve got to mention the motion controller. I haven’t received one to try out yet, but I suspect it makes flying this drone that much easier since you don’t have to worry about 4 axis and stick movements. You just “point and shoot.” This is the only way I see an experienced FPV pilot having fun with this drone. As for a filming perspective, other than a shot imitating a fighter jet, I don’t see any other scenario where it can replace the classic two-stick method of piloting.

Manual mode. Right off the bat. Compared to a standard FPV quad, the full acro mode flight experience is horrible and that’s due to a number of reasons:

That wraps up the flight characteristics, now for the rest:

I’ve taken into consideration that this is not a freestyle quad. It’s not a bando basher. It’s not a race drone or a long-range quad. It’s an FPV Mavic (capable of acro) made out of plastic, and it isn’t meant to be crashed. But flying a quad as brittle as this translates into a feeling of dread during the entire manual portion of the flight. It feels like you’re driving somebody else’s expensive car through a bad neighborhood.

Then there’s the shady business with the batteries. The ones for the drone are way too expensive ($160) compared to the traditional Li-Po batteries ($20-$50) that we use for FPV. As for the goggle battery that comes with the kit, it lasts about 30 minutes, and I’ve seen reviewers comment that you should probably get a couple of those if you have multiple drone batteries, right? Wrong. The goggles that come in the box can be powered just like their V1 predecessors with a Li-Po battery – the same kind that we use for our traditional FPV quads. But you can’t use the one that’s for the DJI FPV quad.

Finally, I suspect that just like with every DJI product, it will get better over time with firmware updates.

Is it a good drone and complete package? Well, yes and no. It depends on what you want – the real FPV experience, or DJI’s curated version of it, which I’d say gives you a fair taste of FPV for very little effort, but ultimately, isn’t “the real deal.”

It’s more like an expensive demo with the best features taken out.

FPV isn’t just about flying a fast drone through goggles, at least from my perspective. It’s about the whole journey you take as you enter the hobby. Crashing your first quad, repairing it yourself, crashing it again. Learning to fly smooth, learning tricks, collecting footage. Exploring new places, experiencing them from a wild new perspective. When you’re good at flying and doing tricks, you start to perceive your surroundings differently, like a skateboarder or parkour athlete. You see every dive, gap, powerloop, mattyflip, and all the other endless possibilities.

Speaking of endless possibilities, you can build any type of quad you want. From small CineWhoops to big long-range rigs. You decide what kind of pilot you want to be and build the kind of quad that suits your needs. Then crash that one, too, not worrying about damage as repairs are cheap, immediate, and you do them yourself. Flying with friends, helping them troubleshoot and fix their quads. The progression from weekend flyer to cinematic pilot/bando slayer/pro racer/king of long range.

And crashing is part of that journey. Without crashing, there’s no getting good in FPV, and you just can’t crash the DJI FPV drone.

It may not be the drone for me or those who already own some FPV gear, but in case you’ve made it to the end and think it’s perfect for you, you can find it in the DJI store.