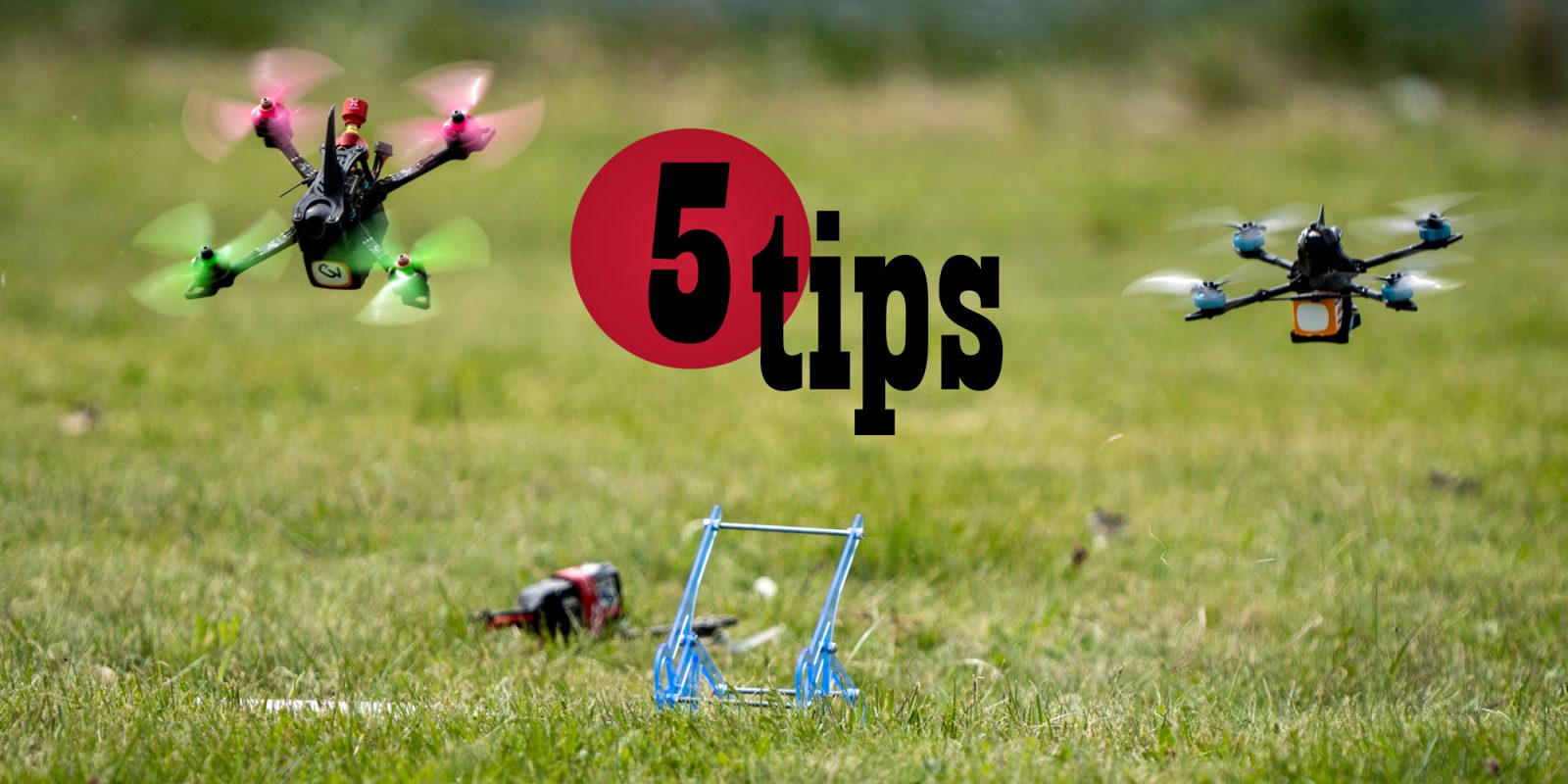 Never been to a drone race? Plan on entering one? You’re in the right place. Here are five tips about going to a drone race. Whether you’re a first-timer or seasoned racer, these will all apply.

Continuing the focus on racing this week, today we’re talking about some things you should know about if you’re just getting into all of it. These came to mind while I was at the race event last weekend. Race events are organized differently depending on where you’re from so some of these things might seem trivial or not apply to races in other places, but some will be universal. I’ve got a few more tips in mind that apply to the intermediate racer, but we’ll talk about those next time.

If you’d like to read up about that race and see what it looked like firsthand, you can do that here. Without further ado:

1. Use a good, clean VTX setup

Don’t use cheap VTXs if you want to race. This is the most important one for beginners – to the extent that most races put a requirement on it. The problem with the cheap ones is that they spray all over the frequency band and mess up other racers video feeds. Avoid the ones with huge SMA connectors sticking out the back, and the ones that don’t support Smartaudio or Tramp. For a racing quad you should avoid SMA antennas altogether and use their smaller MMCX or even better U.FL versions.

But why is Smartaudio/Tramp a must? Because the classic way to change VTX settings is to wire it to the FC, using up a UART port, then having to set it up on the FC (VTX tables? 😱) so that you can go through the struggle of navigating the OSD in your goggles every time you need to change your VTX settings.

It’s a good idea to bring at least two quads with you to a race. But even if you’ve only got the one, here’s a checklist you should stick to. The first two are checked at the race anyway, so to save time and in field repairs, it’s best that you do them at home.

3. Bring a chair and the essentials

I mean this quite literally. Essentials include: folding camping chair, extension cable (you never know the electricity situation until you get to the race), charger, tools, spare props. Two folding chairs and a foldable table if you’re a baller. Some chow, some water, and a good attitude! Whatever you forget to bring, chances are somebody else brought one, and we’re all friends at a race after all. Don’t be afraid to ask for whatever it is you’re missing.

Safety first, don’t forget these things can cause serious injury. It’s good practice to keep an eye on the track when you’ve got quads flying. Especially later in the race when you have the fastest pilots grouped together. Just in case one starts crashing out or spinning out of control toward you.

Depending on the track, unless it’s set up out in a big open field, there’s usually a fence or a net covering the people area at the event. But even then, it’s a good idea to stand well back from the net in case the following happens:

Luckily the netting caught the quad, but it still tapped the pilot standing closest to the net on the goggles. He was the one flying this particular quad and he didn’t even flinch. Take care in turns if it’s near the edge of the track. It’s better to disarm early than to have the quad bump into something and go out of control and possibly hurt someone. This is also why I suggested test crashing your quads. To make sure they wont throttle up when bumping into something and going out of control.

Unless you’re in the big leagues, don’t get too competitive. After all you’re there to have fun. Go slow in the practice rounds, watch other people fly the track, figure it out. Don’t get caught up in who gets the fastest lap time and try to beat it. It’s more important to practice consistency than speed. What saves you the most time is doing all the obstacles right on the first pass for all three laps. Rather than having a really fast lap but messing something up in the other two, go for three smooth consistent laps. Go slow at first, find the best line that works for you, remember it and just fly that. Over the course of the race you’ll get faster and faster at that one line you’re sticking to. Look back in between heats at which obstacles you’re losing time on and focus on improving those.

You take a small screwdriver or something and you spread the pins inside the XT60 connector on your quad. Then you can get away with finishing a race in case your battery slips out of your strap.

I hope you’ve found this article useful. If there’s something I’ve missed or anything you’d like to ask, feel free to leave a comment bellow.