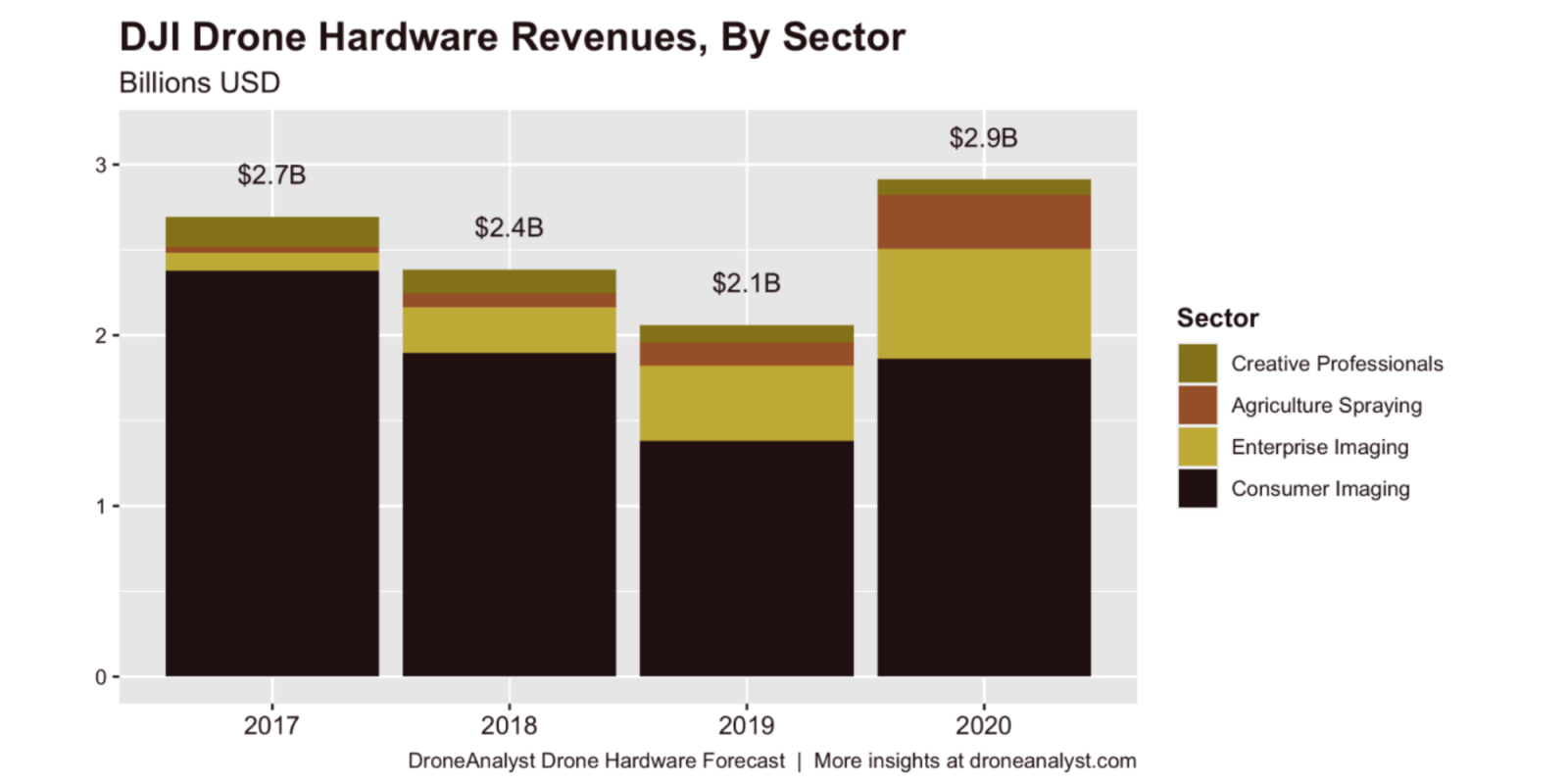 Ever wish you could drill down into the trends behind drone hardware sales? Wish no longer. A new report from DroneAnalyst has the scoop on hardware and data-based projection for where this sector will be headed from 2021-2026.

There’s never a shortage of emails that land in the DroneDJ inbox, but we always make sure we stop and take a look when it’s something from David Benowitz and DroneAnalyst. Quite simply, the company really does have its finger on the pulse of this industry. Its data is based on evidence and a broadly distributed questionnaire that goes out annually. This is in contrast to some reports we see, where the data and sources appear slippery at best.

Now, DroneAnalyst has issued a new kind of report: a forward-looking document that analyzes previous trends and recent shifts in demand to predict where things are headed. It’s fascinating stuff.

Changes in the wind

This industry moves rapidly. But the fact many companies are private and do not release sales figures has traditionally made accurate projects a challenge. DroneAnalyst says it hits multiple sources for data and is confident in its figures and projections:

The industry is dominated by large, private firms such as DJI, who has not commented on their revenues since 2017… While historically DroneAnalyst has shied away from making market estimates, with new datasets and processes, we are now confident in our own market size study, which we released in our new Drone Hardware Sector Report. This report combines DroneAnalyst’s survey data, never before used customs data, public financial data and more to provide what we believe is the most accurate hardware sector study to date.

And it finds, in one key insight, that the global drone market has not yet reached the numbers many have projected. DroneAnalyst data shows it has yet to pass the $4 billion mark (with military drones excluded). It’s estimated to reach $4.4B by the end of the year:

The global pandemic actually brought a boost to some sectors within the drone industry. There was a significant increase in demand for agricultural sprayers, particularly in Asia. Many of these units have been purchased and repurposed for use spraying disinfectant, both indoors and outdoors.

What is maybe most noticeable to the English-speaking world is the large bump in Agriculture Spraying drones in 2020. What started as an interesting niche of the market, is now rising to become a market in itself. With the surge in spraying drones used to combat COVID-19 (despite doubts about their efficacy) and weakening of Chinese export restrictions, the Agriculture Spraying segment saw a massive, 135% uptick in 2020.

And here’s where the analysis comes in, which is part of what gives DroneAnalyst an edge.

Does that size ($4.4B) seem a little low? Many will note that we had seen high revenues from firms such as DJI in the years prior. In our broader study, we explore this in much more detail, but to put it simply, what we saw in 2020 is a recovery period sped up by COVID-19, not continued growth. We explore this idea in more detail by diving into our estimates of DJI revenues and financial filings from Parrot below.

DJI used to share revenue figures but hasn’t done so since 2017. DroneAnalyst manages to fill in the gaps here using data it was able to obtain through surveys, customs data, and – presumably – its own contacts within DJI. (Its lead analyst is David Benowitz, who used to have a management position within DJI.) You can see in this graph that sales of the spraying drones really took off in 2020:

DJI’s revenues are up, but the report points out its data does not take into account the cameras, gimbals, etc. the company sells in addition to its line of consumer and Enterprise drones.

From our data, we had seen increasingly weak sales numbers in the Consumer Imaging space until the end of 2019. At the same time, DJI’s Enterprise Imaging and Agriculture Spraying businesses have grown rapidly. Despite DJI’s overall strength and dominance in the market, they are comparatively weaker in the high growth enterprise sectors than the consumer segment – where they control 94% of the market.

Parrot has public financial filings, which allow DroneAnalyst to drill down with even greater confidence. The company has been shifting its focus more to the Enterprise/Military market and has not been refreshing its consumer line of drones.

“We similarly see a slide in overall hardware demand from Parrot, most notably in the Consumer space (which is selling through existing stock of old units) and Commercial sector, which has been much affected by increased competition and supply chain shifts,” states DroneAnalyst.

Of course, companies (and investors) in the drone space are interested in up-and-coming competition. This is especially relevant with DJI, which still enjoys clear market dominance across the board. Some of DJI’s product line face zero competition – because the firm has actually invented some of the specific product categories. But it’s clear there are some noteworthy competitors in specific silos:

Yet even with that competition, DJI still enjoys vast market dominance. As DroneAnalyst observes, “the product segments where DJI faces competition make up less than 20% of their sales (by units).”

Instead, we’ve seen competitors dial-in on segments where they may have competitive advantages or unique hardware designs in itself (transitional VTOL, coaxial, etc). While these segments may be growth areas of the market, the large amount of competition will stifle these firms’ potential. We’ll likely see this change as the market corrects, with recent announcements of FiMi and Hubsan joining the sub 250g category, and current enterprise players adding new models. In fact, this is a large reason why we are releasing the Drone Hardware Sector Report, to help correct mismatches in the marketplace and offer transparency to stakeholders as to which models are selling. With large, privately owned Chinese players, it can be hard to assess which segments can provide growth opportunities, and which will die off.

You can buy the report, or look at samples in more depth, right here.

If you’re interested in other offerings from DroneAnalyst, here’s what’s available:

It’s already proving to be an interesting decade in the drone space. Stay tuned.