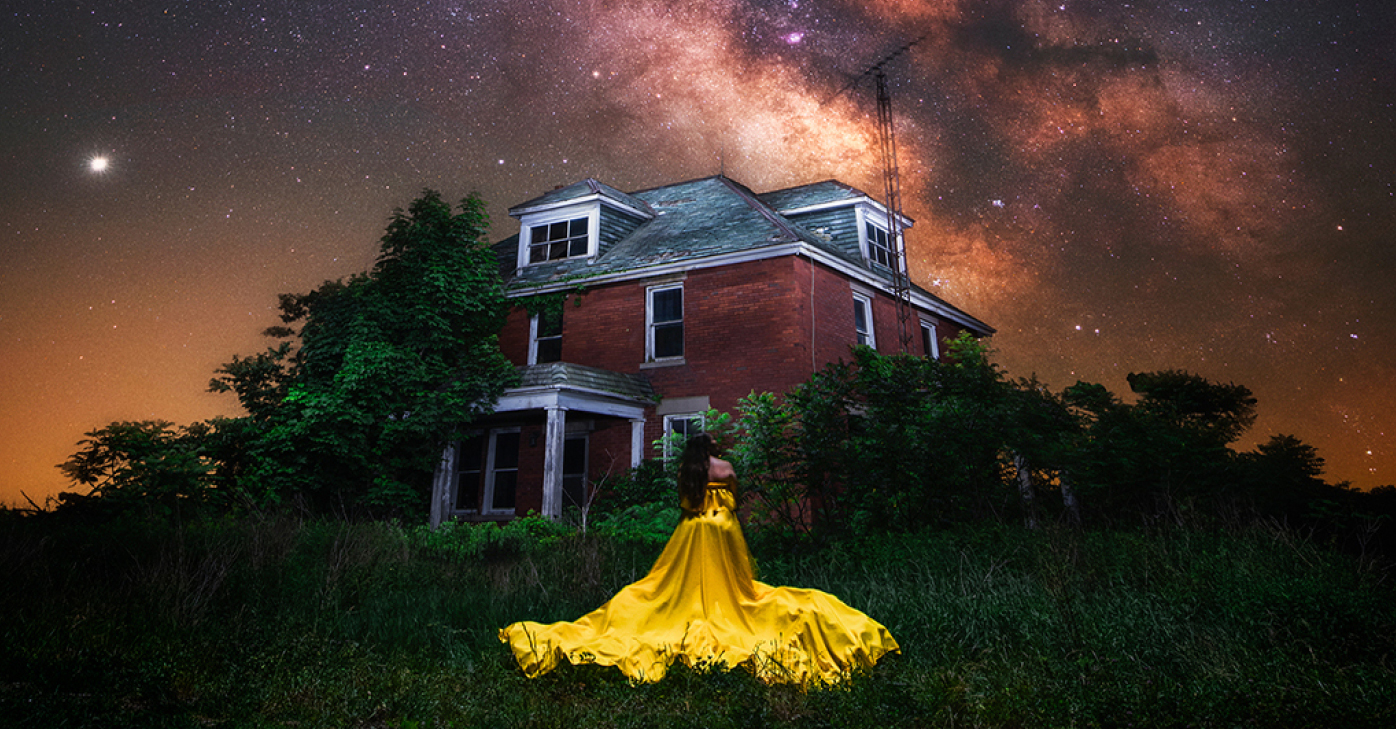 In 2019, I discovered a photographer on Instagram who combined Milky Way photos with abandoned houses. The combination was stunning and so began my interest in the work of Toronto-based photographer, Gary Cummins. Scrolling through his feed, I fell in love with his street and drone photography as well. Reading about his process, I was surprised to learn the special way he used his drone to create his images. However, he wasn’t using his drone’s camera.

I sent Gary a DM to see if he would be open to company during one of his astro shoots. He agreed, but our plan to meet never occurred. However, we did strike up an internet friendship and chatted thereafter. Once I started doing some writing for Drone DJ, I knew I’d want to feature Gary’s drone photography.

His start with photography

Gary moved to Toronto from Waterford, Ireland, in 2011 after living in Australia and New Zealand. His new home inspired him to pick up a camera for street photography. His education was self-guided, and he learned through making mistakes. I asked about how he transitioned from street photography to astrophotography and eventually to drone photography.

“The transition came about after a 10-week trip that took me to Iceland, Faroe Islands, Hong Kong & Southwest USA,” he tells me. “During this trip, I was surrounded by so much nature and dark skies that I made it a mission to dive a bit deeper into it upon my return to Canada.”

Eventually, this love of the stars led him to drone photography.

I used a DJI Phantom in the beginning, with two Lume Cubes attached, but when the Mavic 2 Pro was released I jumped at it due to its portability. It was an easy decision. I use them primarily for light painting these days due to restrictions here in Canada. I do have some ideas, however, for some photography projects this year.

When asked what inspired him to use his drone for more than cool photos and videos, he cites the work of Reuben Wu, saying, “He has been creating great images by using drones with lights attached to them. I gave it a try and found my own way of illuminating foregrounds to obtain better quality in my images.”

I previously wrote about using your drone for photography in ways that don’t require its camera. Gary’s use of lighting with drones inspired one method I pointed out.

How Gary shoots the Abandoned photos

Discussing the origins of the Abandoned series that caught my eye, Cummins says, “It was a bit of a happy accident, to be honest. I was looking for an interesting foreground subject to capture under the night sky and went to a location a friend shared with me, not expecting much. I was pleasantly surprised. They have a story to tell. Each one is so different from the other.”

Describing the technical aspects of his drone photography, Gary said, “We introduce lots of noise in our images in astrophotography shoots and I’ve been trying to find new ways of eliminating that. So, I started light painting old houses and barns with my drone. This allowed me to shoot with much lower ISO settings and get cleaner images all around. It is definitely something that changed the game for me.”

This game-changing technique isn’t without its risks: “It does come with its hazards though. Flying at night can be tricky as the drone’s sensors cannot see and it’s also tricky flying around trees.”

Like some of us who get lost in the moment while flying, clearly, some of Gary’s photos were taken beyond visual line of sight and in dark conditions. While DroneDJ isn’t the drone police and won’t tell you what to do, we always strongly recommend that anyone flying a drone keeps it within the limits of the local laws.

The technical and artistic quality of these images is indisputable. Gary shoots multiple exposures of the foreground structure or vehicle while lighting it with his drone in a grid-like fashion. Next, he blends the final images in Photoshop. After that, he adds a separately shot image of the sky to composite the end result.

A dream trip to the desert

In November 2019, Cummins was among eight photographers who spent five days travelling through remote parts of Saudi Arabia. His mission was to take photos of never-before-shot locations for @discoverNEOM. He called it “one of the best photographic experiences I’ve had to date. Such an incredible place that I’d like to visit again one day.” The drone photography he captured confirm these words.

Asked about his future plans, Gary said, “I’m hosting astrophotography workshops this year. People have become more fascinated with the night sky and have reached out to learn something new.”

Ever positive, Gary ended our chat by saying, “I’m working on a time/hyper-lapse video at the moment to celebrate my ten years in Canada. While we’re all based close to home, I’m thrilled to work on things I’m passionate about. Just having the chance to shoot anything and be creative is something I am so grateful for.”

Keep shooting, Gary. We’ll keep an eye out for more of your work and the other on the night sky.