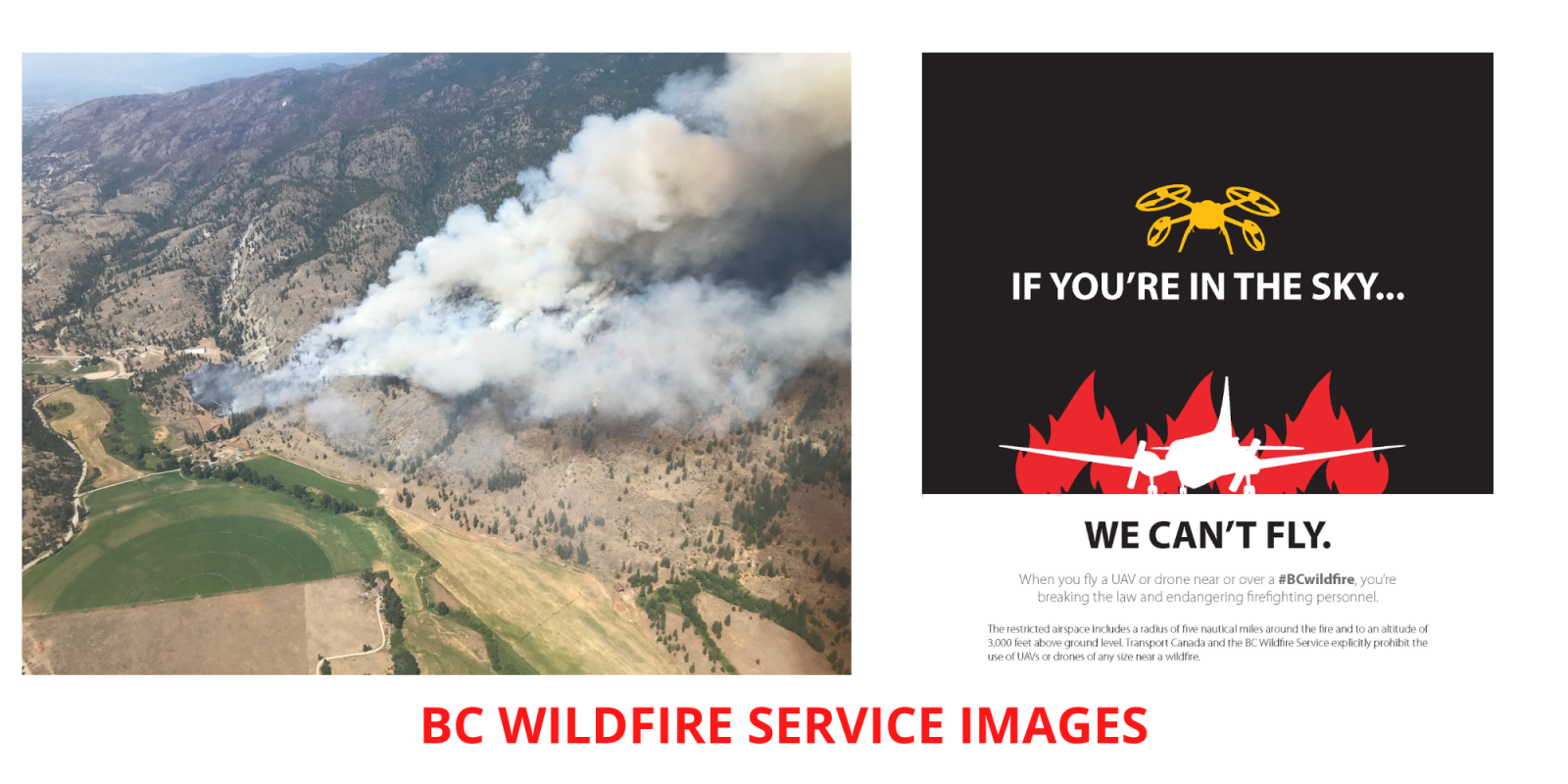 Unfortunately, it’s wildfire season again in western Canada and parts of the US. Even more unfortunately, a drone has already gotten in the way at an active fire where crewed aircraft are deployed.

As you read this, firefighting operations are underway at multiple sites in British Columbia. Some of the fires are out of control and significant resources have been deployed. They include firefighters working on the ground, helicopters, and fixed-wing aircraft. Speed is critical when trying to prevent wildfires from spreading, and crewed aircraft are used to drop crews as well as for fire mitigation (dropping water or other flame retardants). The airspace needs to be clear of drones.

But on at least one fire over the weekend, it wasn’t.

A lot of fires

We weren’t aware of how many fires were underway in BC until we pulled up an interactive map from the BC Wildfire Service. Just look at the screen grab:

At first glance, you might think it’s just the spots where you see flames. Nope. Unfortunately, each of those spots on the map means something:

Clicking on any of those icons in the map pulls up the location and latest information on the fire, including its size. Evacuation warnings and orders are underway in multiple communities.

That’s the number assigned to one of those fires, located near Becker Lake, east of the city of Vernon. Clicking on the map gives you this:

An update posted by the BC Wildfire service on Sunday says two helicopters and 41 firefighters have been deployed to the scene. But it was what happened Saturday that concerns us.

A drone was spotted, which means those helicopters can’t safely fly. The BC Wildfire Service tweeted about the incident:

That wasn’t the only one…

On Sunday, there was another tweet. This time, it was revealed that air operations had to be halted due to the presence of a drone:

If someone is caught flying a drone that interferes with firefighting operations, the penalties are severe: a fine of up to $100,000 CDN, a year in jail – or both. An increasing number of drone detection options are available that can locate both the drone and the operator, even if they are several kilometers/miles from the scene. And the risk of a collision with an aircraft? Well, we recall this incident in Los Angeles where a drone collided with a police helicopter and the operator was charge.

“If a drone collides with firefighting aircraft, the consequences could be deadly,” reads a warning issued by the BC Wildfire Service.

With two incidents in two days, the service is really trying to get the message out with the graphic and logo you saw above: “IF YOU’RE IN THE SKY…WE CAN’T FLY.”

Wildfires cause incredible disruption and damage. Some people lose their homes; some even lose their lives. Firefighting crews, whether on the ground or in the air, take great risks with their critically important work. The last thing they need is a drone interfering with operations.

We know nearly all of you have already heard of and abide by the rules (which are very similar in the US and other countries). But all it takes is one (or two, in this case) rogue pilots to cause problems. So please, keep your drone on the ground near wildfires. It’s the right – and legal – thing to do.