Tony Northrup doesn’t think you should buy a drone. Let me tell you why you should!

In Tony Northrup’s newest video, he “hopes” that you will buy a drone… but believes that most of you shouldn’t. He makes this claim for more reasons than one, stating that there are very few places to fly drones in the world and that the cost is too high for something that he claims is “disposable.” As major advocates of drones with a channel dedicated to their use, why would Tony and Chelsea make a video about not purchasing one? Let’s dissect their argument.

The video is opened with the argument of not being able to fly his drone in certain areas. He lists off places like Las Vegas, Morocco, and State and National Parks within the United States. The truth is there are a good amount of places where drone flight is restricted, but there are also many places where it is not restricted. You can easily find those with a simple search on the internet.

If you don’t already have the AirMap app on your phone, I would highly recommend downloading it. With 10 minutes of research, you can locate all of the airports and heliports near you. It even includes phone numbers to get around Tony’s problem of not being able to fly within the airspace of Las Vegas’ McCartan International Airport. As long as you call the approach tower and have clearance, you can fly within 5 miles of an airport with caution.

Certain countries do have laws banning the use of drones, like his example of Morocco, which can’t be worked around. This again all leads up to the research you do. Before traveling, always check the laws of the country you are planning to visit, so you can be prepared to leave your drone at home or change how you fly.

State and National parks boast some of the best scenery in the United States, with that come some of the most amazing photo and video opportunities. The problem is that National Parks don’t allow the use of drones. According to the National Park Service, you would need special clearance from the FAA to fly your drone. Flight around national monuments and landmarks are also prohibited. State park rules differ by state, to find out what you need to do when you want to fly within their airspace, I would recommend quickly giving it a search online. Even with these restrictions, I have found plenty of scenic areas to fly during my travels. You would be surprised what beautiful landscape lies just off of the highway. 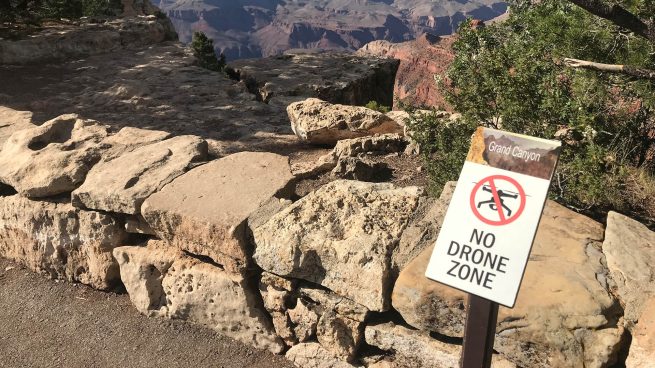 Here are a few tips for anyone looking for places to fly their drone on vacation. My first idea is to ask locals for the best spots around, they will likely know the “hole in the wall” spots with low foot traffic and great scenery. If you’re shy you can always connect with others online. Social media sites provide great information through features like geotags and location pins. Finally, as I have said before, research the internet. Just a half hour in front of the computer will give you plenty of spots to fly for the day.

Just because you can’t fly near an airport (without permission) or in State and National parks doesn’t mean you shouldn’t buy a drone. There are plenty of places to fly with freedom.

As a flying camera, there is a greater risk of losing your drone. Tony makes this quite clear when he calls his drones “disposable” as he shows a clip of his drone flying into a tree. With a drone comes great responsibility and a level of skill needed to not crash. The learning curve is high, especially if you want to get really good at piloting your drone, but this certainly shouldn’t be a reason to avoid purchasing one.

Why you should buy a drone

Drones open up so many possibilities for not only shooting photos and videos but also commercial operations. The thrill you get from flying is like none other and being able to sit down and look back at all of the images you shot, makes it all worth it.

All fun aside, drones have the opportunity to make you money, something everyone likes! If you have a drone and are skilled with it, chances are you can find work to help pay off its ‘expensive’ price tag. In many industries, drones are the future of getting things done. Jumping on this new technology early will benefit those who invest their time greatly.

Tony claims that his nosey neighbors don’t like how loud his drone is when I personally have formed relationships with those living around me because of how fascinating these little aircraft are. Some of my best friends I have met are because they too like to fly and my entire family is fascinated by it. On holidays, I bring my drone out and everyone has a blast getting a turn to fly it around the yard. Drones don’t destroy relationships, they build relationships, and for a large part that is all up to how you act with your drone.

Instead of bashing on drones, Tony should have explained these challenges and how to overcome them. Flying near an airport seems to be everyone’s biggest concern when it is something you can actually get around with the proper clearance and safety precautions.

Bottom line is, drones are awesome! They are fun to fly and could potentially be a lucrative item for every individual or business. So, in short, don’t listen to Tony and go ahead and do buy that drone that you have been thinking about!

What do you think about Tony’s argument? Let us know in the comments below.