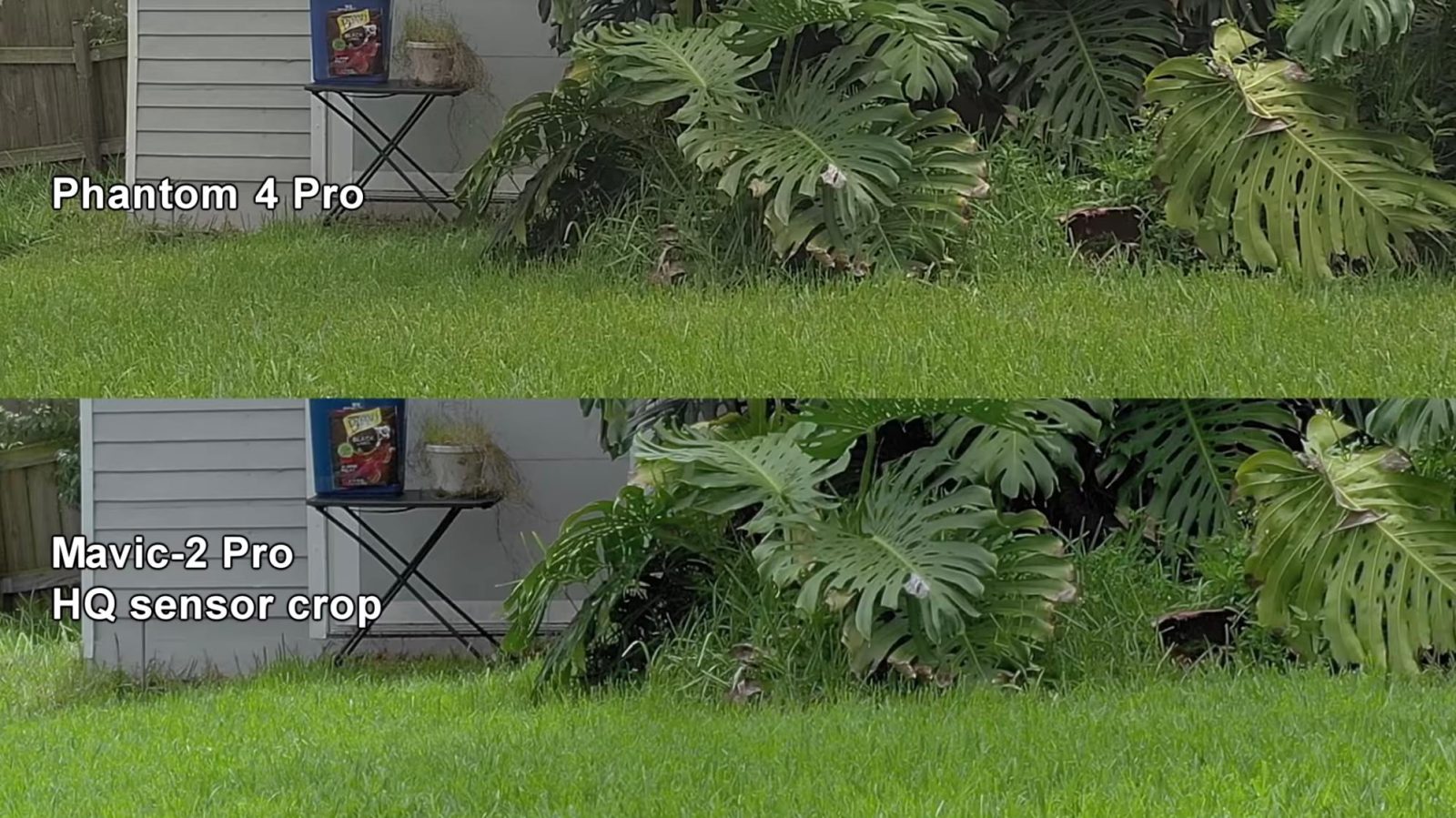 The YouTube video below compares the resolution of the Mavic 2 Pro FOV (full field-of-view) and HQ 4K video modes to other DJI drones, such as the Mavic Air, Mavic 2 Zoom and the Phantom 4 Pro V2.0.

In these tests, the Phantom outperforms all of the other DJI drones in resolution and clarity, including the Mavic 2 Pro. Understandably this caused a bit of an uproar among drone enthusiasts, especially those who just bought the Mavic 2 Pro with its ‘Hasselblad’ camera and 1-inch sensor.

Many people expected the video footage from the Mavic 2 Pro to be on par with the Phantom 4 Pro, but as you can see in the video that is not quite the case. The video maker suggests that DJI has most likely used  line-skipping or possibly pixel binning to either create a barrier between the Mavic 2 Pro and the Phantom 4 Pro V2.0 and future Phantom 5 series as a marketing decision.

Or, they decided to go this route to prevent the 1-inch sensor from overheating, which seems like a possibility considering the small packaging of the camera on the Mavic 2 Pro. It is even suggested that this may be the real cause of DJI’s decision to delay the release of the Mavic 2 Pro. We took a closer look at the video and reached out to DJI for an answer. Here’s what they had to say.

At the beginning of the video, Cliff Totten jumps right to the conclusions. After pointing out that this video only covers resolution and not any of the other features of the DJI Mavic 2 Pro, he concludes that:

In his tests, Cliff used two different setups, one in a studio with a resolution chart and another one outside in a backyard where he shot grass, plants, water, and a shed. He adjusted the distance from the drone to the subject to compensate for the different field of views the various drones offer. He also set the drones to ISO 100 and +1 for sharpness to overcome any loss in quality due to noise reduction being applied to the footage in the camera or drone.

In short, the video shows that the FOV (full field-of-view) on the Mavic 2 Pro is 4K is soft and only marginally better in resolution than the 2.7K version on the same drone. And, that the 4K HQ video from the Mavic 2 Pro is still nowhere near as good as the footage from the Phantom 4 Pro V2.0. The footage is softer and offers less detail and clarity when compared to the Phantom 4 Pro V2.0. Cliff states that both drones use the same 1-inch sensor and that they both use the Ambarella H1 processor. Maybe the Mavic 2 Pro even uses the Ambarella H2 processor, he suggests. So why the drastic difference in quality when it comes to 4K video footage?

The videomaker suggests that it is either because of DJI wanting to create a difference between the Mavic 2 Pro and the Phantom 4 Pro V2.0 (or even the future Phantom 5 series), which would make it a marketing decision. Or, that because of the small packaging of the camera itself, DJI had to prevent the camera from overheating and therefore opted for pixel binning or line skipping. Unfortunately, this resulted in degraded video quality. He suggests that the overheating issue may have even played a part in the delay of the ‘See the Bigger Picture‘ event this summer.

The longer version of the video takes about 35 minutes to watch and offers more detail than this post does, so you may want to watch it in its entirety. At the end of the video, Cliff points out that he is not trashing the Mavic 2 Pro at all. There are many reasons why you may want to buy (or keep) the Mavic 2 Pro with its 1-inch sensor. For instance, the larger sensor still offers better low-light performance and the 4K video resolution issue has no effect on its ability to take amazing photos.

Now there are a few things to keep in mind when watching his video. We do not know how the drones were focussed and how accurately that was done. We also don’t know at what aperture the footage from the Mavic 2 pro was shot. This too may make a difference because the drone is likely optimized for aerial shots, where the subject is typically further away. Apart from lowering the sensor readout speed, which would cause rolling shutter, Cliff mentions that there are only two ways to reduce the sensor readout to prevent the alleged overheating issue, namely pixel binning and line skipping. There is actually a third method as well, which is called sampling. This last method is much more complex, requires more processing power, but produces far better results. According to DJI, this is the method that was used on the Mavic 2 Pro.

So, after having watched Cliff’s video, we reached out to DJI and asked them for an official response. We had a few questions for them, including whether the Mavic 2 Pro would be able to shoot 4K video at 60fps and also whether overheating played a role. We did not get answers on all our questions but DJI did say this:

Raw subsampling is different from line skipping; it uses the full area (of the 16:9 portion) of the image sensor so the signal-noise-ratio is much better than line skipping. Raw subsampling is also different from pixel binning. It is an optimized filtering & sampling process which is much more advanced than the simple average mechanism of pixel binning. Raw subsampling causes some loss in the finest details. However, this is not as visible in real scenes (like aerial filming) as it is on charts.

So, according to DJI the 4K video quality (or lack thereof) in FOV is not due to overheating, or a marketing decision. It is the result of the complexity and hardware restrictions that are inherent to developing such a capable, small, folding drone. DJI does not mention this having played any part in the delay of the Mavic 2’s launch. Whether or not this is the whole story, it is DJI’s official answer.

Like many of you, I was also hoping for 4K footage that would be on par with the Phantom 4 Pro. Having to use the HQ mode to get the best 4K footage is not ideal because it changes the field-of-view to that of a 40mm lens (35mm equivalent). That means you lose the wide-angle view that the 28 mm lens offers. I’m hopeful that DJI will be able to squeeze better 4K video performance out of the Mavic 2 Pro’s hardware in the future and that they will make that available to us through a firmware update.

Also, keep in mind that the Mavic 2 Pro (and Zoom) are still massive improvements over the original Mavic Pro. The new Mavic 2 has much better optical avoidance, better connectivity through OcuSync 2.0, flies longer and farther, take much better images and is still foldable and small enough to take with you on your trips. So, yes if you are looking for the best all-around DJI drone that you can take anywhere and do anything with, I’d still recommend the DJI Mavic 2 Pro. If you want better video performance and don’t care about much about portability than opt for the Phantom 4 Pro V2.0 or wait for the Phantom 5.

Btw – if you’re interested in learning more about how the Mavic 2 Pro processes video footage, be sure to watch this video as well.

Buy your next drone directly through manufacturers, such as DJI, Parrot, Yuneec or retailers like Amazon, B&H, BestBuy or eBay. By using our links, we will make a small commission and it will not cost you anything extra. Thank you for helping DroneDJ grow!