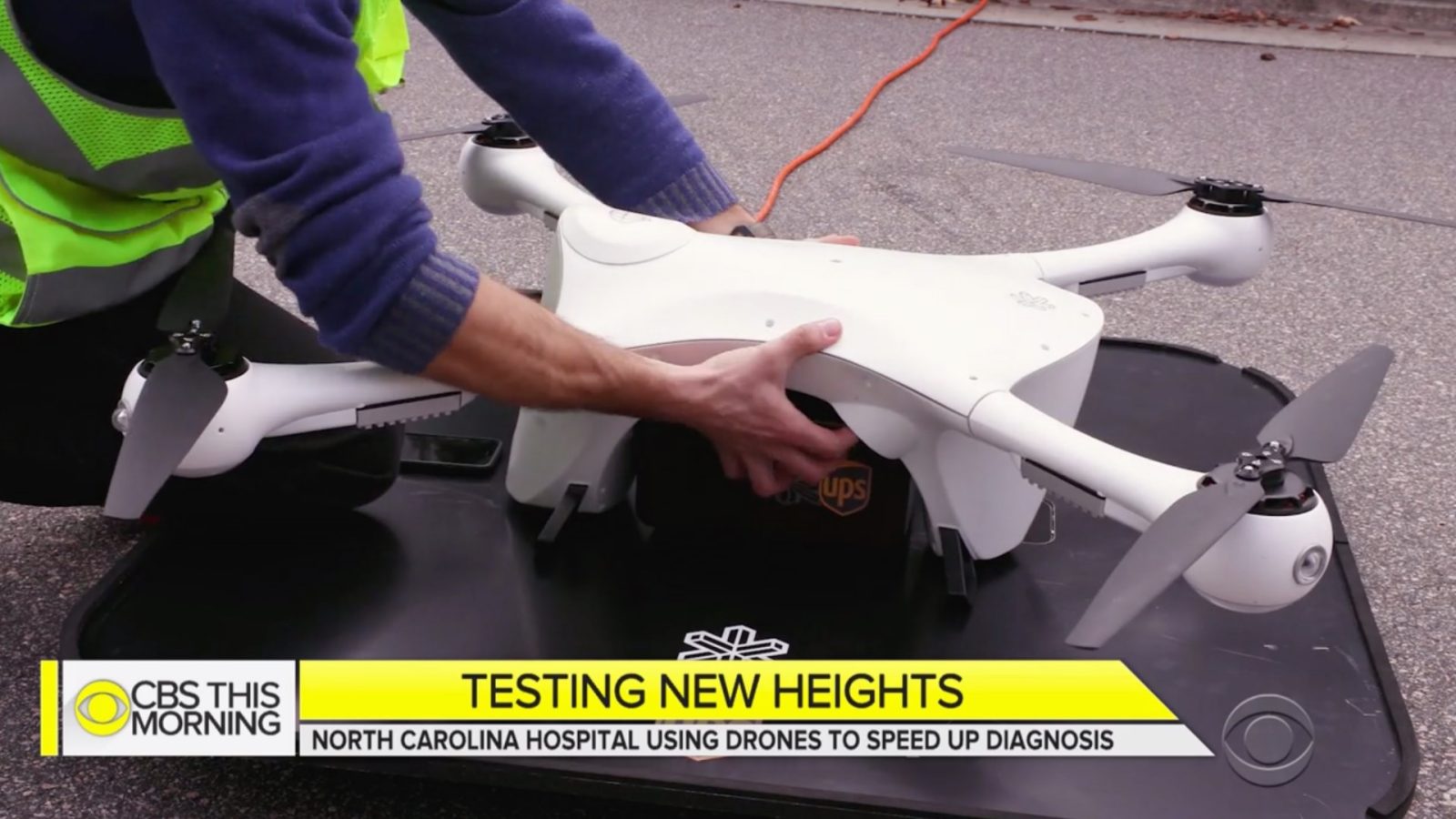 In partnership with UPS, a hospital in North Carolina is pioneering a drone delivery program to speed up the delivery of critical medical samples across the WakeMed hospital campus. Medical samples are put in a small cooler that is carried by the drone to a lab roughly 3/4 of a mile away. It takes the unmanned aircraft less than four minutes to make the delivery. On foot, the trip takes about 45 minutes.

Especially for urgent deliveries of blood samples across WakeMed’s sprawling one million-square-foot medical campus, the use of drones to make the delivery makes a lot of sense.

The drone delivery program was the idea of Dr. Stuart Ginn, a former United Airlines pilot. He saw the use of drones as a way to speed up the diagnosing process of patients. Ginn said:

“We are interested in speed and reliability. We’re talking about shaving off 30 minutes to three hours easily, from our lab, end-to-end lab time.”

To make the drone delivery program of medical samples a reality, WakeMed partnered with UPS and drone maker Matternet and launched the program in March. It is the first FAA-approved, revenue-generating commercial drone delivery service in the United States. Up to 200 medical samples are delivered in eight drone flights per day.

“When we look at the turnaround times and how important it is to get blood work in and the results turned back around, it’s a critical space.”

According to CBS News, Dr. Ginn believes that medical samples will soon be flown by drone between hospitals that are miles apart, and that one day they may deliver to remote rural hospitals as well. He added that:

“Maybe the patient doesn’t even have to come here. And maybe they can be cared for at that smaller facility.”

Currently, the delivery of medical samples by drone takes place in North Carolina as part of a three-year testing program, but UPS is hopeful that in the near future this program may be expanded to other hospitals across the country.

Btw – CBS News has a great video showing the drone delivery program at WakeMed. You can see it below.

There are a lot of recent developments in the drone delivery space.

In Africa, Zipline has been very successful in making deliveries by drone. In recent years the company has made thousands of deliveries by drone in Rwanda and recently announced that it will start its services in partnership with the government in Ghana.

Last month the University of Maryland medical center successfully completed the first delivery of an organ by drone.

We recently reported that Google’s Wing Aviation received FAA-approval for making deliveries by drone in rural parts of the United States. The company also received approval from the Australian aviation authorities to use drones commercially in death part of the world. Wing Aviation is planning to expand its drone delivery services to Europe and will start in Finland soon.

We hope that Wing Aviation will have paved the way for other companies looking to start drone delivery services in the United States and that the FAA will be able to process their applications quickly. I’m sure Amazon is paying close attention.