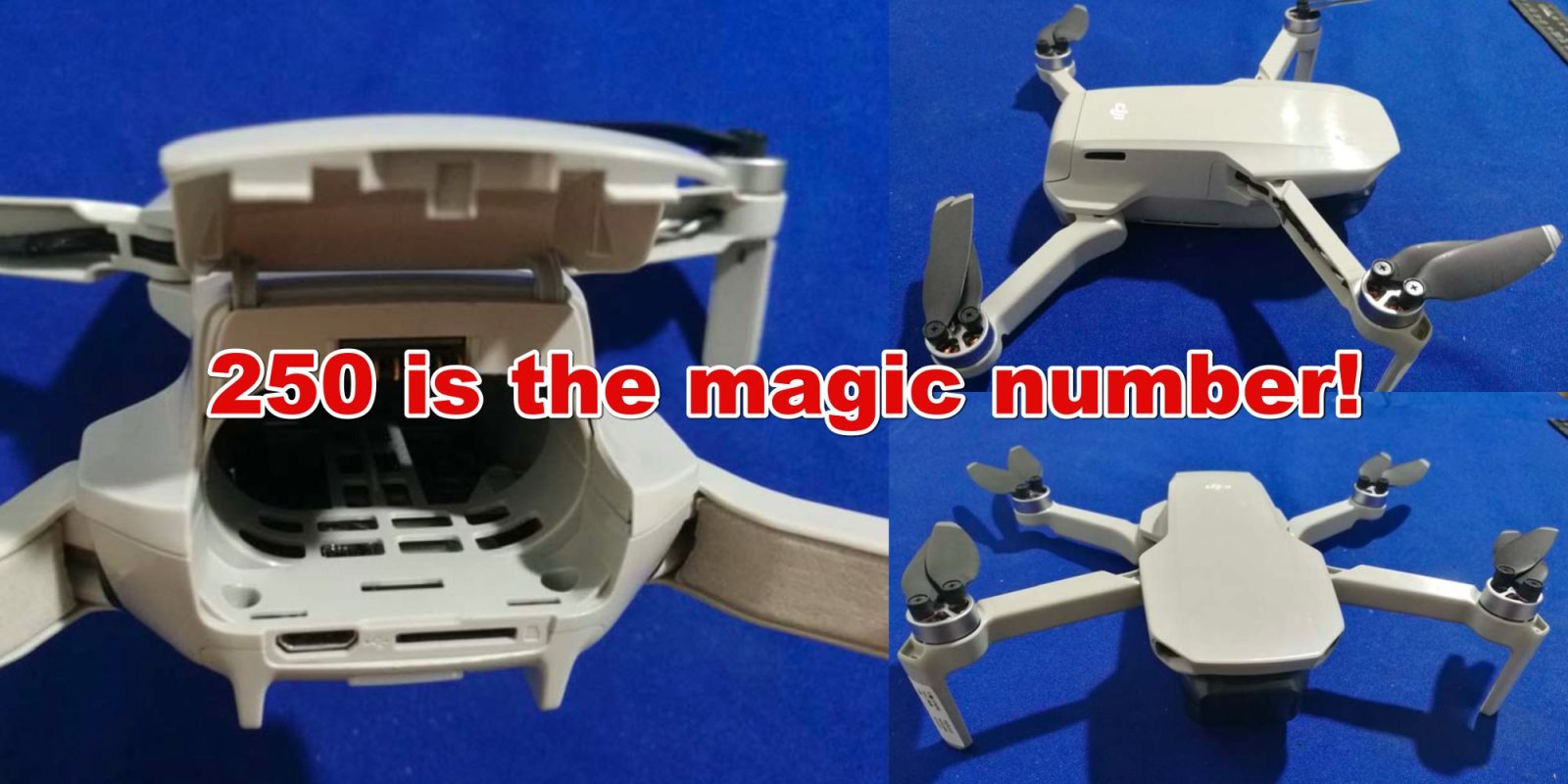 The new DJI Mavic Mini will dominate the consumer drone market by weighing less than 250 grams.

Yes, less is more. And here’s why.

We’ve already seen the leaked spec sheet of the new DJI Mavic Mini indicating that the drone will weigh only 245 grams. But there are other indications that this drone will indeed weigh less than the 250-gram weight limit registration requirement set by the FAA. And this one comes straight from DJI themselves. Furthermore, I will explain why 250 is the magic number, and why it will lead to DJI dominating the consumer drone market (not that they don’t already) when they launch the DJI Mavic Mini later this year.

Remember back in May of this year when DJI had a press and industry event in Washington, DC? It was called “Elevating Safety: Protecting the Skies in the Drone Era.” DroneDJ was there, and it was during this event that DJI announced:

All new DJI drone models released after January 1, 2020, that weigh more than 250 grams will include AirSense technology, which receives ADS-B signals from nearby airplanes and helicopters and warns drone pilots if they appear to be on a collision course. This will be the largest single deployment of ADS-B collision awareness technology to date, and sets a new standard by putting professional-grade aviation safety technology in drones available to everyone.

DJI even listed it as the No. 1 item on their 10-point plan to elevate safety in our skies:

1. DJI will install ADS-B receivers in all new drones above 250 grams

ADS-B receiver in the DJI Mavic Mini? No way

Now, ADS-B receivers can be very small and weigh as little as 5 grams, so theoretically it could probably be built into a small drone like the DJI Mavic Mini. But why would DJI want to?

Why would they burden such a small, lightweight drone with additional electronics that need power, cooling, space, add weight, and increase the cost of the aircraft in an already competitive market for mini-drones?

It would be far more sensible (and profitable) for DJI to keep the DJI Mavic Mini below the 250-gram threshold and deliver the best, lightest, and least expensive folding DJI drone ever. A mini-drone with almost all the important features people expect nowadays from a DJI drone, such as 4K video, hi-res panorama photos, obstacle avoidance, portability, great flying characteristics, affordability, and the least amount of drone rules and regulations headaches when it comes to flying your new toy.

And that brings me to the last point. Brendan Schulman from DJI once explained during a workshop that this 250-gram weight limit somehow had been established in the drone industry, and more importantly in the policymakers’ minds, as the arbitrary magic number. It’s the threshold weight above which drones would become dangerous and possibly pose a risk to manned aircraft and people on the ground in case of a drone incident or crash.

DJI’s ability to stay below the 250-gram weight limit would really open up the skies for the Chinese drone maker. If they can pull this off, and I think they can, DJI will produce and sell the ultimate consumer drone. It would eliminate almost all the concerns of policymakers around the world. It would not need to be registered with the FAA. And DJI could produce them by the boatload and sell to them consumers everywhere with all the important features they desire.

It seems clear to me that DJI is about to launch a mini-drone, the DJI Mavic Mini, that will truly come to dominate the consumer drone market. That’s my two cents. Let me know what you think in the comments below, and don’t forget to take our poll. Cheers!