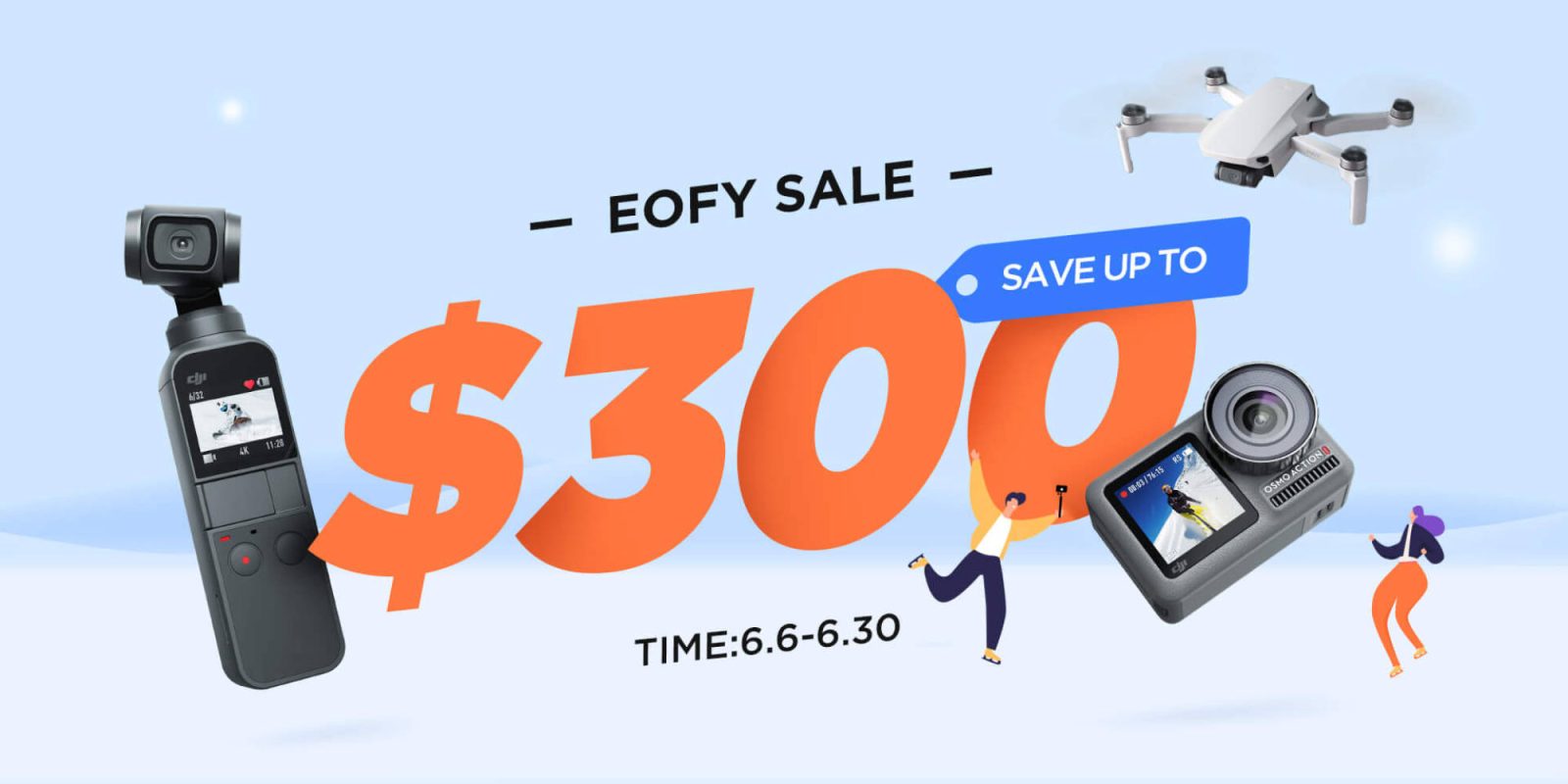 DJI has announced its End of Financial Year (EOFY) sale for Australia and its Winter Surprise sale for New Zealand discounting the Mavic 2 series, Mavic Mini, Ronin-S, and Ronin-SC along with the Osmo Pocket, Osmo Mobile 3, and the Osmo Action. If you are looking for a DJI sale in the US, take a look at the Father’s Day sale going live on June 12th.

The Mavic 2 Pro features a Hasselblad camera with a 1-inch Sony sensor. The Mavic 2 Zoom has a camera with a 24-48mm zoom lens and offers the Dolly Zoom effect. Both drones have the new hyperlapse functionality. Compared to the original DJI Mavic Pro, the new Mavic 2 flies farther (5 miles), longer (31-minutes), quieter with low-noise props and faster (44 mph). DJI introduced OcuSync 2.0 with the launch of the new Mavic 2 Zoom and Pro. It now has omnidirectional obstacle avoidance, improved APAS and ActiveTrack. – Haye Kesteloo

The DJI Mavic Mini’s high-grade camera captures compelling footage in 2K high definition, and its new DJI Fly app’s suite of creative features seamlessly transforms photos and videos into professional-quality productions. Its enhanced, stable flight performance provides more opportunities to explore using one of the longest flight times for a drone of its size. Users can unleash their imagination with Mavic Mini’s exciting accessories, including a DIY Creative Kit and a 360° Propeller Guard for added safety. – Haye Kesteloo

The Ronin S is DJI’s 3-axis stabilizer for both mirrorless and D-SLR cameras available in two sizes for either camera system. It competes head-on with for instance the Zhiyun Crane models. The Ronin S works with most camera lens combinations such as the Canon 5D, Panasonic GH, and Sony Alpha systems. The Ronin S features dedicated control buttons for the camera and gimbal and lets you toggle between SmoothTrack settings, record and stop the camera. A high precision joystick, similar to the ones you find on your drone controller, allows you to aim the camera quickly and accurately. The Ronin S also features a Sport mode for fast-moving subjects and other intelligent modes such as Panorama, Hyperlapse, Track and CamAnchor. – Haye Kesteloo

The smaller, lighter (2.4 lbs., 41% lighter than the Ronin-S), cheaper ($439) stabilized gimbal for mirrorless cameras, the DJI Ronin-SC. The name stands for DJI Ronin-S Compact, btw. It is a 3-axis stabilizer that can support up to 4.4 lbs for up to 11 hours. The Ronin-SC offers the same modes as Ronin-S but with several exciting new additions, including Force Mobile and ActiveTrack 3.0. – Haye Kesteloo

The DJI Osmo Pocket is a handheld gimbal camera that combines mobility and stability in one device. It shoots sharp 12 MP still photos and stable video up to 4Kp60. the onboard touch screen displays a live feed from the camera and can control camera and gimbal movements. A mobile device connects to the DJI Mimo app where professional-quality videos can be created in Story Mode. Intelligent Modes such as ActiveTrack, Panorama, and Timelapse give you everything you need for the perfect shot. – Haye Kesteloo

The DJI Osmo Mobile 3 adds support for One-Tap Templates allowing for your footage to automatically get music, effects for a great social media post. The inclusion of ActiveTrack 3.0 means you will no longer be bound to your phone screen in the moment, just set it and forget it. The gimbal will do the rest. Dolly Zoom allows for new cinematic zooms to be created with your phone allowing everyone to recreate the Hitchcock effect. The Osmo Mobile 3 also includes Sport Mode allows you to keep up in fast action filming. The Osmo Mobile 3 includes a new hyperlapse feature allowing for great footage and even better footage when combined with ActiveTrack 3.0. The usual modes are also included, panorama, timelapse, slow motion and the usual camera settings. – Josh Spires

The DJI Osmo Action features two displays, one of which is a touch screen. The camera takes 12-megapixel stills though its F2.8 lens (145 degrees FOV). Photos and video are recorded on a 1/2.3” sensor. And, video can be recorded in 4K, up to 60fps at 100Mbps with DJI’s Electronic Image Stabilization (EIS), called RockSteady. – Haye Kesteloo