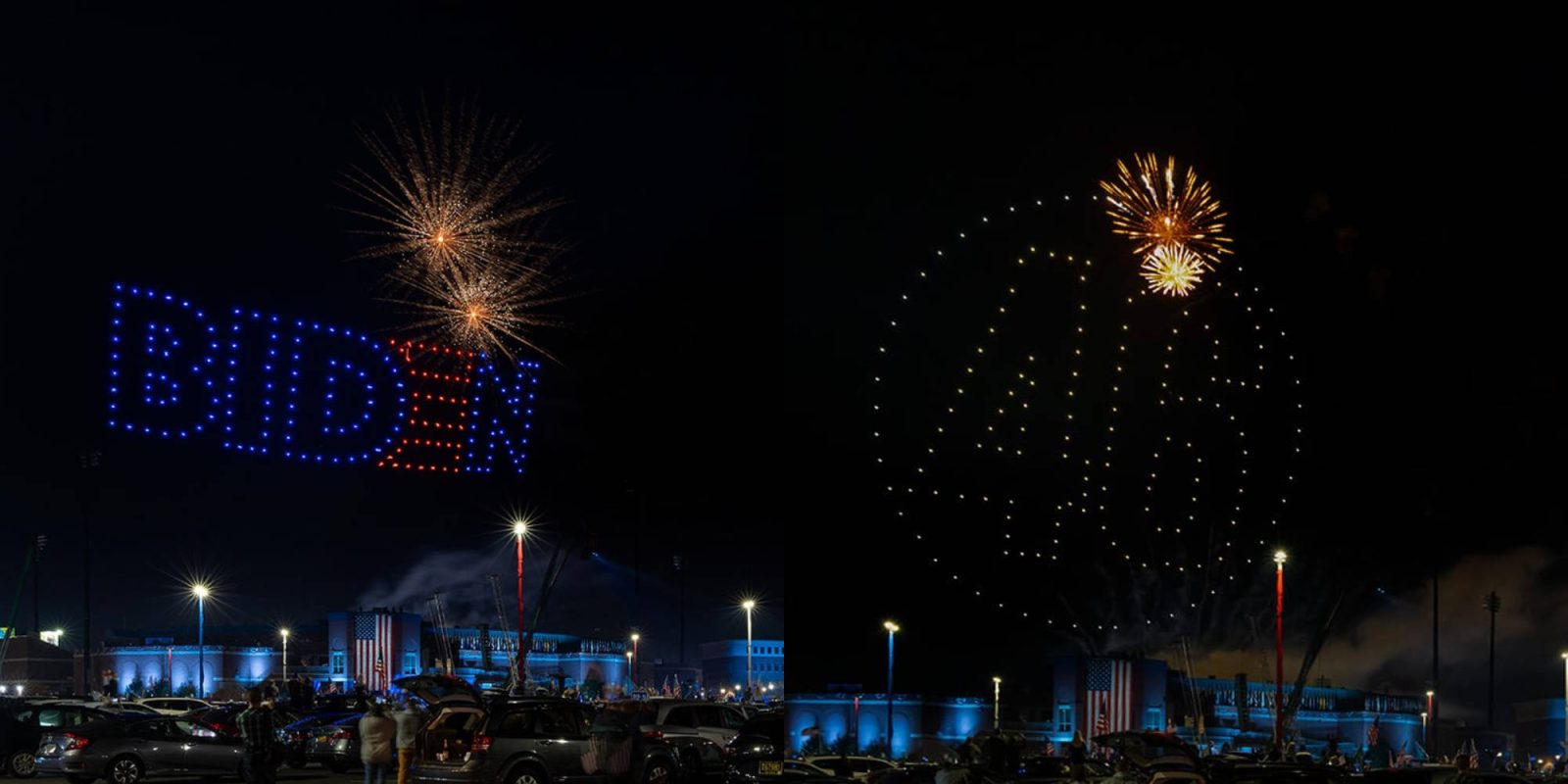 Earlier this month, President-elect Biden addressed the nation in his hometown of Wilmington, Delaware. Soon after, drones took to the sky in one of the most important drone light shows to date. We can now look at the people behind the event, Strictly FX and Verge Aero.

The drone and pyrotechnic shows were created and brought together by Strictly FX, an award-winning live special effects provider. The producer behind the show was Ricky Kirshner, of Kirshner Events, who has worked with Strictly FX on all of its drone shows.

Strictly FX doesn’t have its own in-house drones. Instead, it turned to Verge Aero, the leader in advanced drone show technology. Two hundred GPS-guided drones were used during the show with precision choreography and synchronization with the backing tracks.

The drones allowed the Biden campaign’s vision to come to life in a way not possible with fireworks, creating precision images and symbols at exactly the right time.

Planning for the show began just two weeks before the speech was to take place. This resulted in all teams working together quickly and efficiently to ensure everything was in place, including the logistics and permissions. Ted Maccabee, CEO of Strictly FX, continues:

“Since this was a national security situation, the permissions that we had to get from various government entities were incredibly detailed; thankfully, we started on this process three weeks ahead of the election, and we able to wade through all of the authorizations in time to create this once in a lifetime event.”

When it comes to the drones, Vergo Aero was required to go through a rigorous vetting process that satisfied all authorities involved. The flexibility and redundancy built into Verge Aero’s systems helped it to pass all the security requirements and scenarios given.

Due to the event’s nature, there was no live rehearsal to make sure everything went according to plan. This resulted in Verge Aero completing all of its testing and planning in its drone show software. Nils Thorjussen, CEO of Verge Aero, shared:

“This really speaks to the accuracy and robustness of our flight planning software. The client was amazed at the accuracy of our pre-show rendering.”

Since the election results were delayed, no one knew when the show would happen. This resulted in the team being notified on Saturday night, right before the speech took place. Usually, this would be an issue for setting up, but it was not a problem as everything was ready to go. Maccabee added:

“Our 10-person east coast special effects team didn’t know if we were even going to be doing the event until we got the green light from a member of the Biden Camp on Saturday night.”

The show started with the usual fireworks. Within a few seconds, drones appeared out of the darkness to create stars in the US colors with A Sky Full of Stars by Coldplay playing in the background.

While Biden and Harris looked on in awe with their families from the stage, the drones then formed Biden’s campaign logo used in the 2020 election. With a few of the drones in the background, creating a glimmering star effect, the rest began to create an outline of mainland USA before filling it in with blue and red.

As part of the final sequence, the drones created the words “President-elect,” with the fireworks perfectly aligned to make it look like they were shooting out of the drones. To finish the show, the drones formed Biden’s name, the number 46, which links to him being the 46th US President, and finally, Harris’ name.

Not an ordinary drone show

For as long as drones have been around, they have mostly been seen as killing machines and spy tools. That’s something everyone in the industry has been working hard to change. Having drones at such a massive event like this being safely used for entertainment purposes has already helped this negative view become more positive.

And it raises awareness. Drones are becoming less and less seen as this really bad thing in the sky but are now seen as a tool; a tool to improve entertainment, science and research, public safety, agriculture, inspection, and STEAM education.

Drones being used in everyday life is still fairly new and unknown when it comes to the general public. Many people have never seen drones being used in agriculture, search and rescue, research projects, public safety, and on the front line, to name a few.

An event like this will only help to improve the public’s perception of drones being used in a positive way. It will be great to see how drone usage will change over the next few years and the harsher restrictions placed on foreign models being removed. Whoever had the idea to put drones in the show has changed the way hundreds of millions will perceive drones. Great work to everyone involved!

Drones in a national security TFR isn’t a small deal. Someone slogged through a ton of paperwork. Kudos.