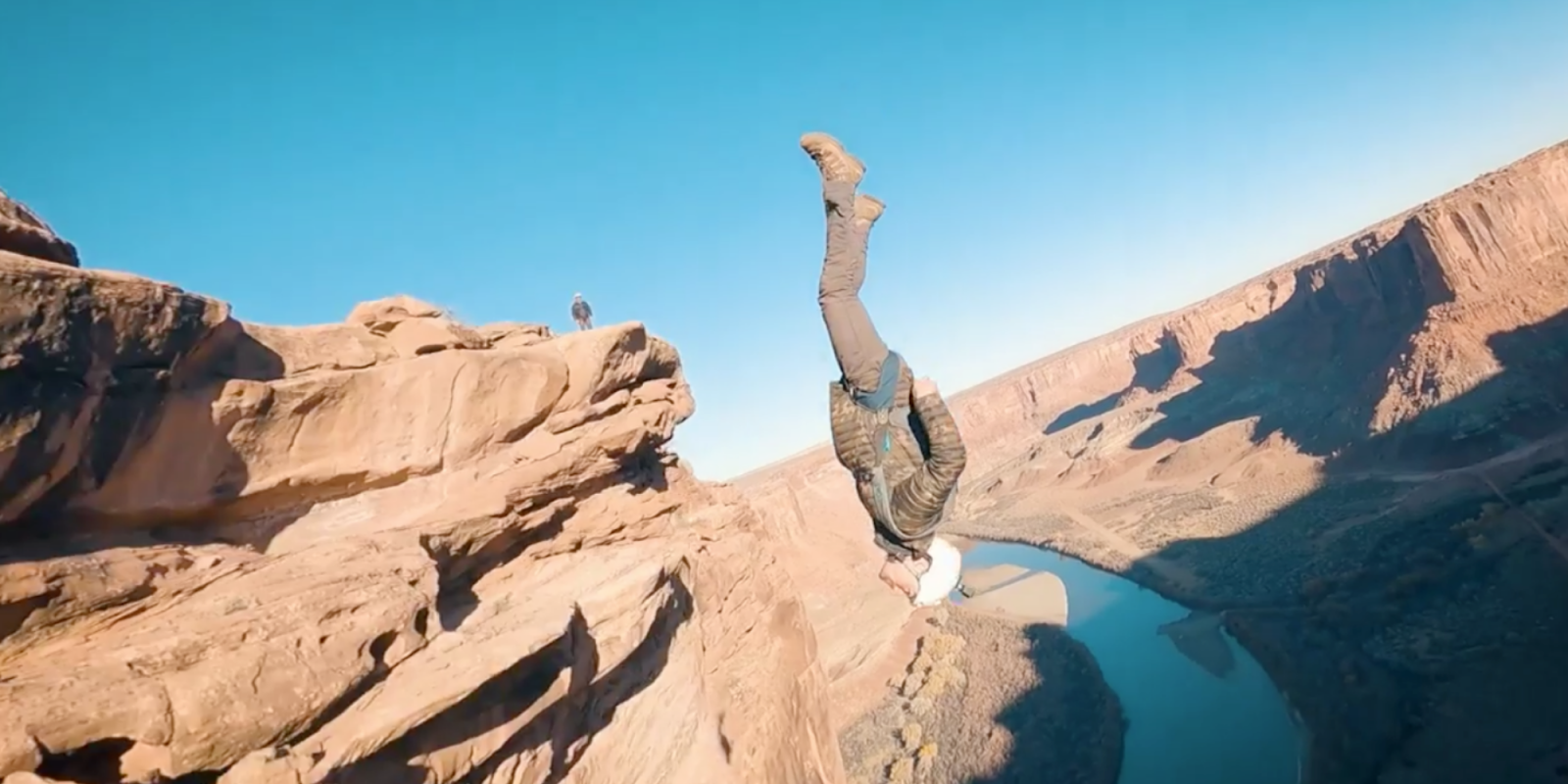 We have something really worth watching. And, we’re willing to bet, odds are you’ve never seen anything like it until now.

There are a lot of stories that come about because we surf for drone news. This isn’t random surfing, but surfing with a purpose in specific spots. And today, something went past our screens that caused us to stop cold. Whaaaaaaaat? And then we were hooked, watching the same 22 seconds over and over. Because, well, it’s that good. What’s more, it’s that unusual.

After all, it’s not often you see a drone follow a B.A.S.E. jumper off a cliff.

The footage came from Nikolay Anishchenko, who had posted it to a drone group I belong to. He wrote: “What we do in life, echoes in eternity… Shout out to the @swampbase crew for showing us around.”

And there it was. This:

Yeah, we had to say it again. Because this footage looks so amazing. In fact, we tracked down Nikolay to ask him some questions about this, the gear he used, and how long he’s been flying.

On that last part, you’ll be surprised to hear the answer:

The first time I flew an fpv drone was Feb 15, 2020. After a skiing injury kept me from skydiving and speedflying for a few months, I reached out to my good friend Carter Hansen to see if he could teach me the ways of fpv drones. I ordered the parts Carter needed to build my first drone and as I waited for them to come in, I put in 60+ hours on the DRL Simulator which helped solidify the controls and nuances for flying fpv. Once Carter built the drone, flying it for the first time felt natural. I had so much fun I ended up cutting the flight time by half because I was flying so fast and crashed into a snow bank when I ran out of battery for my first flight. Since then, Carter and I started FPV Filmz and have been producing cinematic fpv content ever since.

Now that’s an endorsement for flying a simulator!

You’ve no doubt heard the sport referred to as “B.A.S.E. Jumping” where that acronym stands for Building, Antenna, Span (like a bridge) and Earth (like a cliff). So where was this filmed, and how did Nikolay get involved? We’ll let him tell you the story, since he was kind enough to type this out for us:

A couple of our BASE jumping friends were coming out for the Turkey Boogie (which is an unofficial BASE jumper gathering in Utah during the week of Thanksgiving) and we were invited to join them. This was our second time filming BASE jumpers. The first was back in July when we had a chance to film Miles Daisher and Sean Chuma at the legendary Perrine Bridge in Idaho (only bridge in the US where it’s legal to jump year round).

How do you plan a shoot like this? Are there some special precautions involved? Any unique challenges? Well, the answers are: Carefully, Yes, and Yes:

The tricky part about capturing BASE jumping footage is getting close enough for a good shot but keeping far enough away to make sure you don’t interfere with the jumper’s parachute deployment. The most important thing is to anticipate a potential off heading deployment of the BASE jumpers parachute, which could pull them in the direction of your drone and cause a collision. Safety is of primary importance to us, so we always had a bail out plan in case we drifted too close to the jumper mid-dive. Another challenge was making sure we had line of sight for the entire jump and landing. Flying from below is preferred but makes communication and timing tricky. In many situations, we flew from the top of the cliff and had to sit right on the edge to make sure we had complete line of sight to the landing zone. Strapping on fpv goggles a foot away from the edge of a massive cliff can be intimidating at first, but something you get more used to the more you do.

Okay, that last part — about putting the goggles on a foot from the edge of a cliff — that made my stomach go just a bit queasy. But hey, all the power to anyone who’s willing to do that.

Oh: What were you flying?

I was flying a GoPro Hero 9 on a 6″ Shendrones Ichabod which my homie Carter Hansen built.

(Small world. We interviewed Andy Shen for The Buzz podcast about two weeks ago!)

Well, Nikolay and his pal Carter Hansen have formed an FPV film company, called FPV Filmz. We encourage you to check out the site and consider subscribing to their YouTube and other social channels. Those YouTube posts are definitely worth checking out. Once again, terrific piloting, and tons of extreme adventure sports. (And wow — you guys get around.)

And there is. We couldn’t resist this YouTube post as well, because it tells the story of these two guys and their company. Nice shooting, too!

Although those 22 seconds that started out this post were amazing… just wait a bit. Nikolay says he’s cutting a longer version from that B.A.S.E. jumping day.

We’ve told him to let us know when it’s done. Because we just know you’ll want to see it..