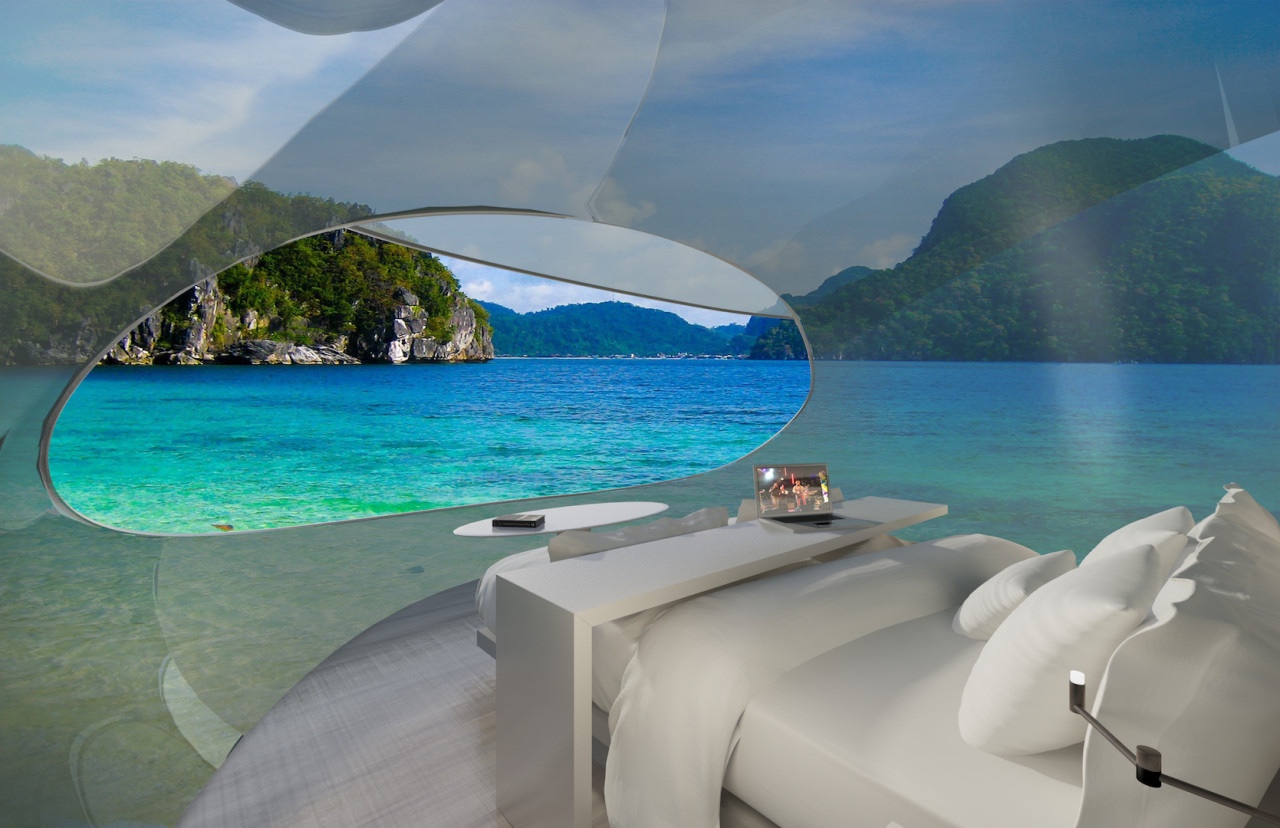 Even the best new ideas can be pushed too far. That may be the case with at least one concept for a futuristic drone hotel.

Since drone hotels don’t exist yet, it’s impossible to claim there’s a right or wrong definition of what they’ll be. Generally speaking, however, one imagines they’ll combine the usual temporary residential and service amenities of today’s hotels with immediate, on-site access to future Urban Air Mobility transportation. That would represent an ideal solution for business people and tourists needing to get to and from places around the host city, using their hotel as HQ

The creative, indeed visionary proposal of architectural firm Hok is that the drone is the room. And you won’t need to leave it because it will be taking you to wherever you want to go.

Hok calls the concept Driftscape: a modular hotel with central facilities (bar, restaurant, lobby, etc.) used as a hub for flying glass pods. Those craft double as rooms (200 square feet, queen-size bed, and bathroom. Imagine living in that after a Mexican food pig-out). Those central Driftscape stations would hold between 10 and 15 pods at a time. Most craft, however, would presumably be short-timers present only for recharging.

Why? Because the entire idea is for residents to bugger off: get out and around to see the world, and without ever having to leave their rooms.

To do so, guests would inform Driftscape staff of places they’d like to visit, and then set out in pre-programmed, entirely autonomous drone-pods. In addition to revolutionizing mobility of travelers, Driftcraft would also reduce negative consequences of tourism. Since voyagers would take in sites from the comfort their emission-free rooms, the usual pollution, erosion, and other damage often inflicted by converging hordes roaming hither and yon would be eliminated.

That would ensure protection of fragile natural settings drones might settle in – Icelandic floes, Patagonian pampa, or Kaua‘i’s Nā Pali Coast. But it would also offer relief for attractions like the Great Wall of China or Grand Canyon that could be over-flown rather than trod upon.

Designs envision a limited number of Driftcraft to be connected to enable family or small group excursions.

Obviously, Hok conditions the concept on tech transport, regulation, service offers, and market demand developing to the point of making it feasible. Should that happen, however, Hok doesn’t foresee the cost of a Driftscape stay exceeding the price of renting a luxury car today.

So what’s the hitch? As astonishing, even ingenious as the entire concept sounds, there’s something singularly off-putting about the idea of never leaving your drone-room. And that would be true even if the world wasn’t exiting a year-plus of COVID-19 lockdowns, isolation, and distancing.

Sustainability and reduced wear and tear of spots visited is commendable, but sealing oneself in a flying polymer bubble to do that seems excessive. Mobility is great, but what’s the point if that means never leaving your room? Part of the human experience is interaction with new settings; experiencing those in a quasi-virtual manner while sitting in the middle of them seems self-defeating.

Nobody wants to be the kind of stick-in-the-mud homebody everyone refers to as “couch potato.” But is jet-setting “pod mole” really where we want the future to take us?