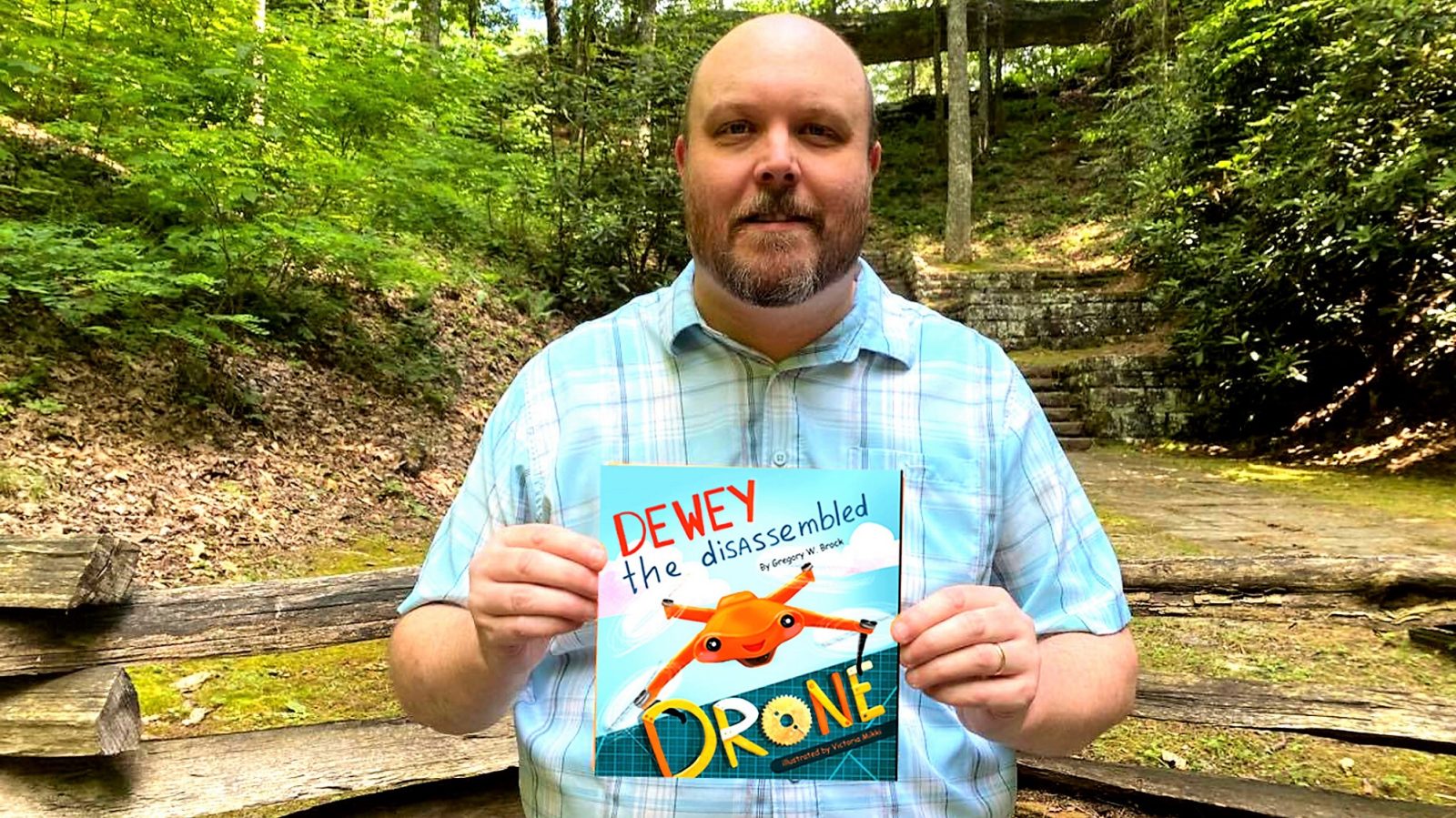 Ever since he could remember, Gregory W. Brock wanted to be an author. But procrastination, and bills, came in the way. Until now. Today, the father of four launches a Kickstarter campaign to self-publish a children’s picture book on the heroics of Dewey, a disassembled drone.

Dewey wants to fly. But he does not have all his parts. And so he would crash on take-off.

After Dewey was returned to the department store by the child that received him for his birthday, he felt he would never take to the skies. But an unlikely hero would believe in him enough to help Dewey achieve his dreams of flying.

The book focuses on hope, believing in yourself, and never giving up on your dreams, no matter what obstacles you may be faced with.

Brock hails from Benham, an Eastern Kentucky town so small, it’s home to less than 450 people. The 42-year-old holds a customer service job with cloud-based solutions company Linq. And he has used his Bachelor’s degree in filmmaking from Full Sail University to work on several features over the years.

It was about three years ago that Brock first discovered drones. “I had bought a small one just to get the hang of it and learned to fly,” he says. After a couple of upgrades, he settled on a Mavic Air 2, which he enjoys flying recreationally. “My hope is to eventually get a commercial license and film aerial footage for a few independent films in my area.”

Dewey, the Disassembled Drone: The inception

Books were always a big part of Brock’s life. He remembers climbing up his grandfather’s lap as a 4-year-old and reading Pinocchio with him. His parents would also read adventures stories to him every night.

Brock carries forward that practice with his kids, currently reading to little Tinslee, who turns 6 today. “My daughter enjoys our time together while reading books. Just seeing the wonder in her eyes as we embark on new adventures within the books puts a smile on my face,” says Brock.

I had always known that I wanted to write children’s books, however, I am the world’s worst procrastinator and kept putting it off. But on Christmas Day 2020, our internet went out. That day, I wrote four manuscripts for children’s books, and have not stopped since. Dewey, the Disassembled Drone, was the first manuscript I penned.

The idea for the book came to Brock while cleaning his own drone. “As I had just finished cleaning it, there were some parts that were not attached to it.” And thus was born Dewey, a drone that dreamt of flying.

Emoting with the inanimate

Armed with a draft for the book, Brock began the search for an illustrator. “I went through hundreds of illustrator submissions looking for someone with a skill for breathing life into an inanimate object.”

That is when he came across Viktoriia Mychalevych from the Ukraine. Her skill at creating characters that were inanimate and giving them strong emotions and character was so apparent that Brock hired her immediately. “She began the process at the end of February and is currently putting the finishing touches on the final illustrations. It has been a smooth process and she is truly a talented illustrator,” he says.

Kicking off with Kickstarter

Self-publishing a book involves many costs: development, production, distribution, marketing. And so Brock is running a Kickstarter campaign to raise funds for getting the children’s book printed with an offset printer. The campaign launches today, June 24, 2021, at 12 p.m. EST, on Tinslee’s birthday.

And there are several early-bird rewards up for grabs, including signed hardcover copies, digital download copies, bookmarks, plushies of Dewey, and activity sheets. The campaign will run for 30 days.

“My vision for Dewey, the Disassembled Drone is for whoever comes in contact with the book, can find a little inspiration for themselves,” Brock says with a smile. “To see that anything is possible and dreams can be realized with focus and faith.”

Brock also hopes to get more kids interested in drones with his book. At the same time, he wants parents to think about the importance of robotics in daily lives and realize the many world-changing opportunities that come with drones.

He says, “Drones can help them to see new heights and see the beauty in our world from a different lens while capturing some of the most beautiful scenery that even the smallest of towns have to offer. I hope parents and children can read this book and cherish the memories that it brings to them.”