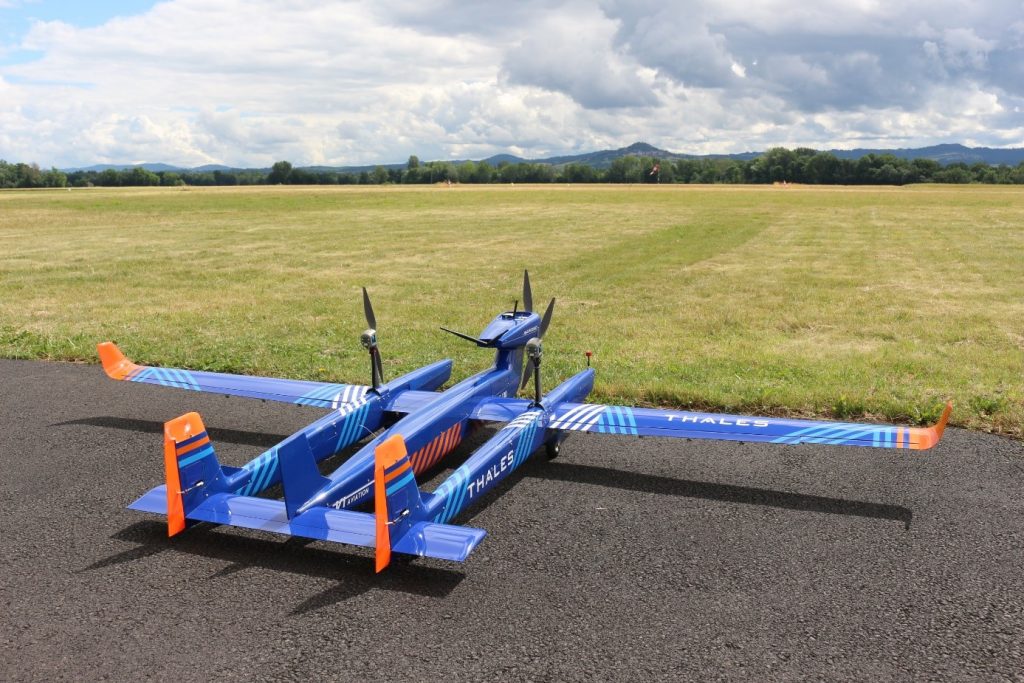 French defense and aerospace group Thales has announced the successful testing of a long-range drone prototype that can fly missions of up to 100 kilometers. The company says the uncrewed aerial vehicle (UAV) is already compliant with European Special Condition Light Unmanned Aircraft Systems regulations for future drone flights over populated areas.

Though the UAS 100’s current range capacity is limited to 100 kilometers, the group says that distance will be doubled by the time it has finalized the drone, which will be operable in automated beyond visual line of sight (BVLOS) mode. The craft is powered by two electric motors and an internal combustion engine. Thales says that combination of power sources allows for prolonged flight time, and enhances resistance to potential failure.

The full-sized version of the UAV is expected to be aloft in the second half of 2022, with a fixed wing pan of 5.4 meters and maximum payload of 10 kilograms. The current, reduced prototype will fly its first public demonstration on the last day of the October 19-21 UAV Show in Bordeaux.

The craft ­– whose take-off requirements are said to be under 100 meters – was rapidly developed with partner Issoire Aviation, a pioneer in all-carbon aircraft that contributed to UAS 100 aerostructure design and manufacturing. Drone software specialist Hinsos oversaw onboard autopilot tech. The project was also supported by the French Ministry of the Armed Forces’ Defense Innovation Agency.

“With this new long-range UAS, Thales is providing the trusted solution needed for civil, government and military inspection and security applications,” said Thales executive vice-president of avionics, Yannick Assouad. “As well as meeting today’s operational requirements, the new system paves the way for the air mobility solutions of tomorrow.”

Thales says the drone’s system redundancy and internal security measures – including jamming-resistant navigation and communications tech – are unparalleled in the current the light UAS market.