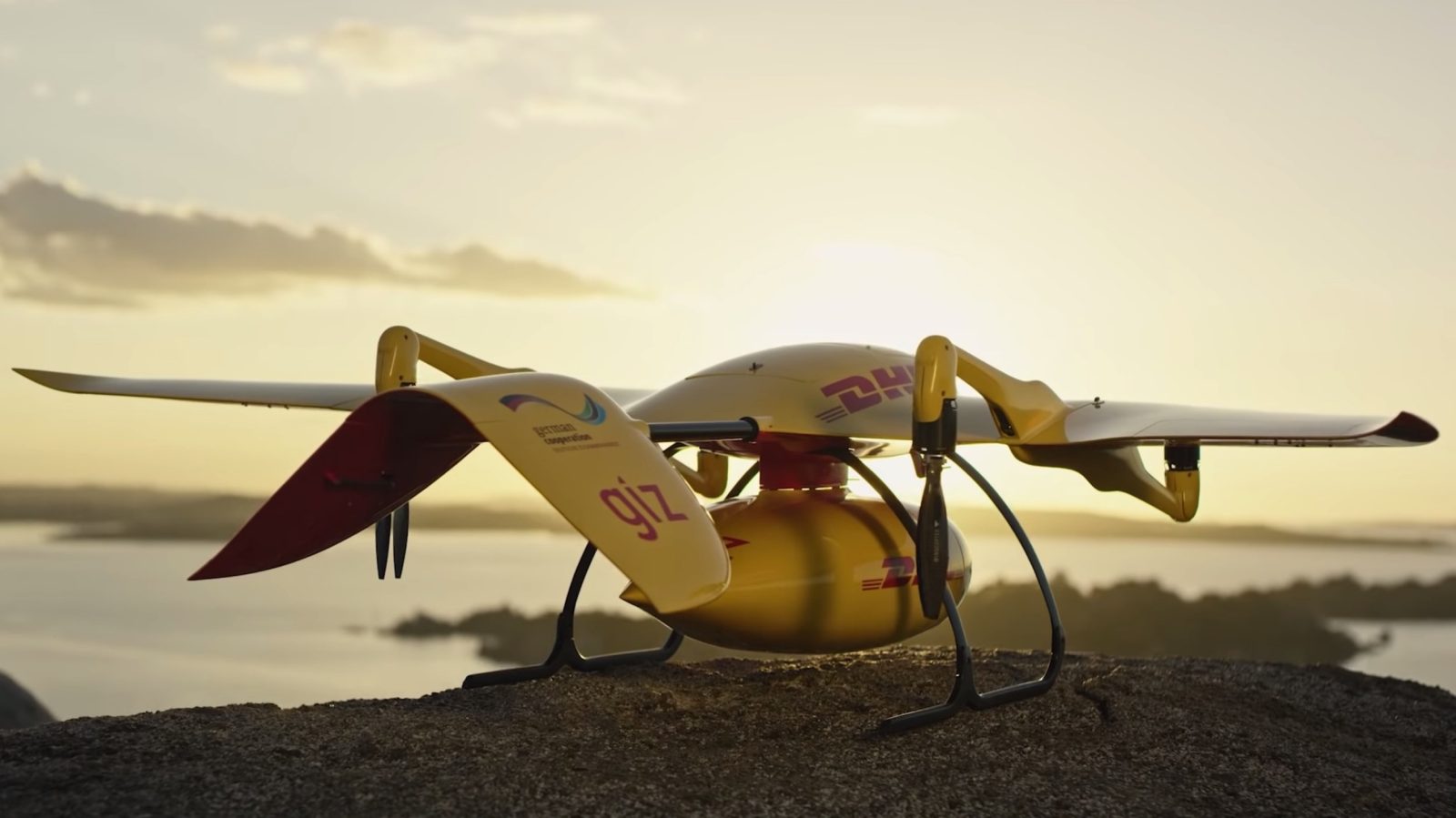 They have been at it for a few years now but earlier this month, DHL, GIZ on behalf of BMZ and Wingcopter, flew the DHL Parcelcopter 4.0 over 37 miles in about 40 minutes to a remote island in Lake Victoria as part of the project ‘Deliver Future’. The tilt-rotor drone can perform vertical take-offs and landings. However, once in the air it can transition to a more energy-efficient fixed-wing done that flies a lot faster.

The Parcelcopter 4.0 can carry up to 13 pounds of cargo in an insulated aerodynamic compartment underneath the drone. In an insulated an aerodynamic compartment the aircraft can carry 13 pounds of cargo while flying autonomously at a top speed of 93 miles per hour for a maximum distance of 62 miles. However, the DHL Parcelcopter’s distance is reduced to 28 miles if it is carrying a full load.

Parcelcopter and DHL had partnered with the Deutsche Gesellschaft fur Internationale Zusammenarbeit (GIZ, a group focussed on sustainable development) in the so-called ‘Deliver Future’ project. The goal of this project was to use the Parcelcopter 4.0 to deliver medication to a hospital on Ukerewe Island in Lake Victoria from a central warehouse in the city of Mwanza in Tanzania.

During the trials the DHL Parcelcopter made up to seven autonomous flights per day, covering the 37-mile distance in roughly 40 minutes, cruising at about 81 miles per hour. After a quick charge on the island, the drone would return to the mainland and deliver blood samples for analyzes at Mwanza’s Bugando Medical Center.

At the end of the ‘Deliver Future’ project, the Parcelcopter 4.0 made over 180 take-offs and landings, flying a total of 1,367 miles and logging about 2,000 minutes of flight time.

According to GIZ a key feature is that:

“The DHL Parcelcopter 4.0 barely needs any infrastructure as it takes off and lands vertically. After delivering its cargo, it can easily be loaded with blood and laboratory samples to take back to the mainland. In future, the Parcelcopter could therefore not only improve logistics in the public health sector: it has the potential to help prevent crises worldwide, for example allowing an early response to slow the spread of viral diseases like Ebola.”

Zipline delivers by drone as well

DHL Parcelcopter is not the only drone making deliveries in East Africa. At the beginning of this year, we reported on Silicon Valley drone company, Zipline that was looking into expanding its operations to Tanzania as well. Zipline reached out to us today and said:

“Zipline’s new drone flies at 100 MPH, and with a 100-mile range can also deliver between our facilities to allow for nation-wide inventory load balancing. We have delivered well over 20,000 units of blood in Rwanda, and by the end of the year will be delivering to all hospitals in the country, as well as up to 500 clinics. Our average delivery time is 15 minutes, and we have had no products lost during these many deliveries. Most importantly, the “perfect logistics” we have achieved in Rwanda, meaning there are zero expiries and zero stockouts, has saved thousands of lives to date while reducing system-wide costs.”