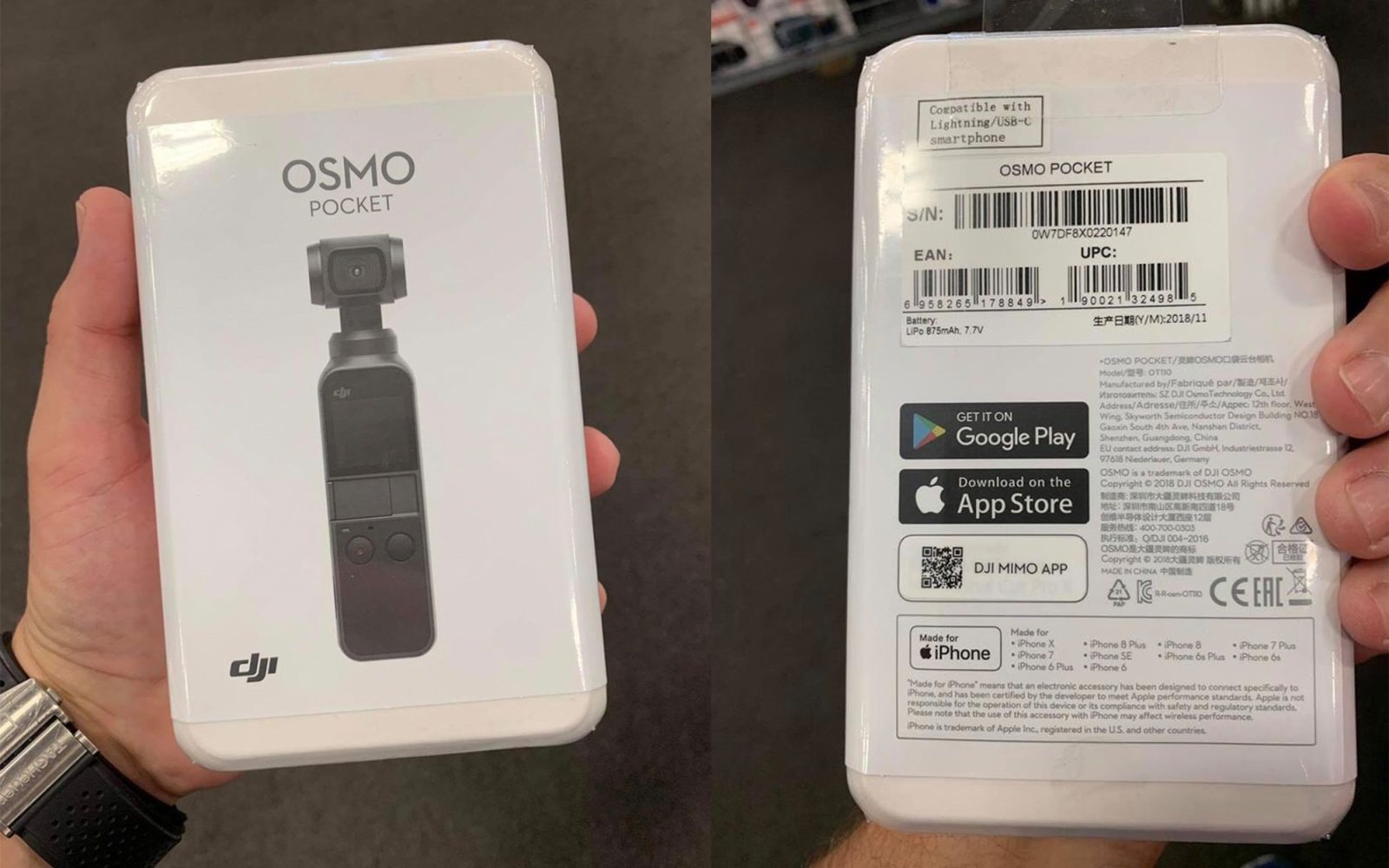 Here we go! Newly leaked DJI Osmo Pocket video and photos surface ahead of DJI’s “Because Life is Big” event in New York this upcoming Wednesday. The photos and video show the actual packaging of the new handheld camera and gimbal. We have now seen an initial photo early this summer, the FCC filing, the leaked photo from last week and now these leaked photos and video. It seems that we will not be seeing a new Phantom 5 this week.

Even though was have seen a number of leaked images, we still don’t have a lot of information on the actual device. Looking at the camera, it looks very similar to the Mavic 2 Pro’s camera (same housing), however, there is no Hasselblad logo displayed and the lens itself seems slightly different from the Mavic 2 Pro. So at this point, we’re not quite sure if we’re getting the 1-inch sensor. It may well be the camera and sensor from the Mavic 2 Zoom instead.

At the front of the DJI Osmo Pocket, we see the DJI logo, a display, an area where we know you will be able to attach accessories, an LED indicator light and two buttons (record on the left and another one on the right). In the photo from last week, we saw an attached piece might be used for controlling the angle of the camera or it could be a follow focus or zoom control.

The backside of the DJI Osmo Pocket box

In the second leaked DJI Osmo Pocket photo, we see the backside of the DJI Osmo Pocket packaging. At the top left, it says that the device is compatible with lightning/USB-C smartphones. It has the S/N, EAN and UPC barcodes and numbers. The Osmo Pocket comes with a LiPo 875mAh, 7.7V battery and is manufactured by SZ DJI Osmo Technology in Shenzhen, China.

The DJI Mimo app that goes with the DJI Osmo Pocket can be downloaded from the Google Play store and Apple App Store. The model that is shown in the photos and video apparently is specifically made for the iPhone. On the back it says:

“Made for iPhone means that an electronic accessory has been designed to connect specifically to the iPhone and has been certified by the developer to meet Apple performance standards.”

The fact that the iPhone Xs and Xr are not mentioned on the packaging can be seen as an indication that this device has been in the works for some time already and that DJI has most likely built-up enough inventory around the world to start selling and shipping right after Wednesday’s launch event. Obviously, DJI wants to get as much of the Christmas and Holiday shopping season as possible. It will be interesting to see if, DJI will price the DJI Osmo Pocket aggressively, as they did with the launch of the DJI Osmo 2. I’m not expecting a $129 price tag but something right below the $400 GoPro Hero 7 would make a lot of sense.

So, unfortunately, it seems that we will not be seeing a DJI Phantom 5 this week, but a new DJI Osmo Pocket will surely make a lot of people happy this Christmas!

What do you think about the leaked DJI Osmo Pocket? Excited? Let us know in the comments below.