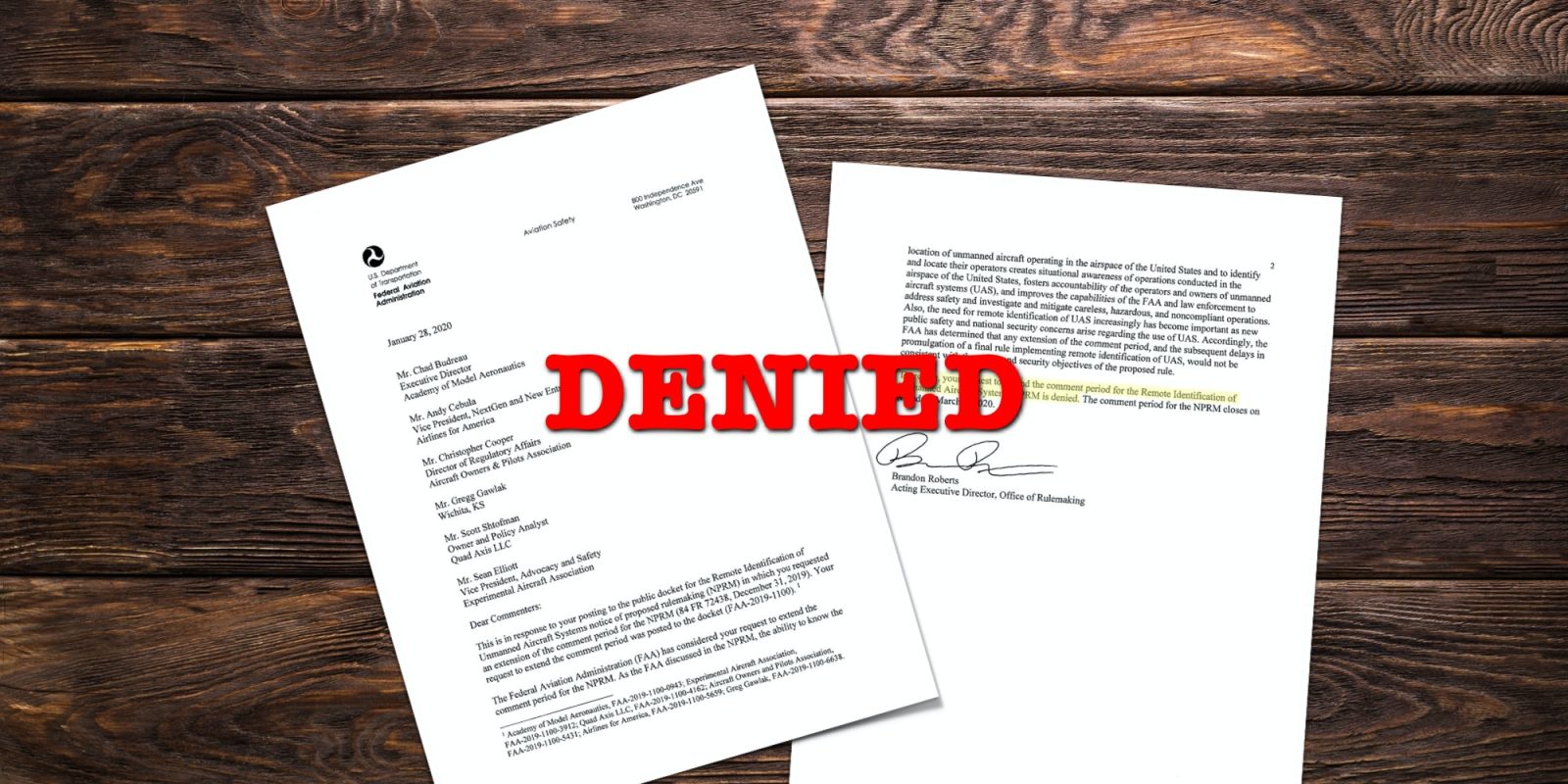 On many fronts within the drone industry, people have been taking action to try and stop or change the current proposed rules for remote identification for drones, better known as the Federal Aviation Administration’s (FAA) NPRM for Remote ID for Drones.

Today we learned that after delaying Remote ID for drones three times themselves, the FAA has denied a request from commenters to extend the 60-day commenting period that ends on March 2. The agency states that “subsequent delays in promulgation of a final rule implementing remote identification of UAS would not be consistent with the safety and security objectives of the proposed rule.”

On December 26 (yes, right after Christmas), the FAA released its proposed rules, or NPRM for Remote ID for Drones. Before these new, overly restrictive, expensive, and privacy-invading rules go into effect, hobbyist and commercial drone pilots have a 60-day window that ends on March 2, 2020, to submit their comments to the FAA in the hope that the rules might be changed. Today, however, we learned that after the FAA has delayed the issuing of these proposed rules three times themselves, they have denied a request from commenters to extend the commenting period beyond March 2.

If you have read the 319-page document that encompasses the new proposed rules for Remote ID for Drones, you will find, as we did, that the document is not easy to understand, at times even confusing, and that it raises many questions about exactly how these new rules will be implemented. For instance, what will these new rules mean for all different kinds of drone applications ranging from FPV drone racing to Search and Recovery Missions, or just a parent who would like to fly a drone with their child?

DroneDJ has been working behind the scenes with a number of drone organizations to make sense of these new rules and to come up with feedback, ideas, and a Drone Advocacy Kit to help other drone pilots understand these rules, as well as inform them about what they can do to take action.

Some commenters thought it would be reasonable (great idea, by the way) to ask the FAA to extend the commenting period to allow for all parties involved to have more time to digest these new rules and to provide insightful feedback. However, as you can read in the response below, the FAA denied the request to do so, citing “safety and security” concerns.

This is in response to your posting to the public docket for the Remote Identification of Unmanned Aircraft Systems notice of proposed rulemaking (NPRM) in which you requested an extension of the comment period for the NPRM (84 FR 72438, December 31, 2019). Your request to extend the comment period was posted to the docket (FAA-2019-1100). 1

The Federal Aviation Administration (FAA) has considered your request to extend the comment period for the NPRM. As the FAA discussed in the NPRM, the ability to know the location of unmanned aircraft operating in the airspace of the United States and to identify and locate their operators creates situational awareness of operations conducted in the airspace of the United States, fosters accountability of the operators and owners of unmanned aircraft systems (UAS), and improves the capabilities of the FAA and law enforcement to address safety and investigate and mitigate careless, hazardous, and noncompliant operations. Also, the need for remote identification of UAS increasingly has become important as new public safety and national security concerns arise regarding the use of UAS. Accordingly, the FAA has determined that any extension of the comment period, and the subsequent delays in promulgation of a final rule implementing remote identification of UAS, would not be consistent with the safety and security objectives of the proposed rule. 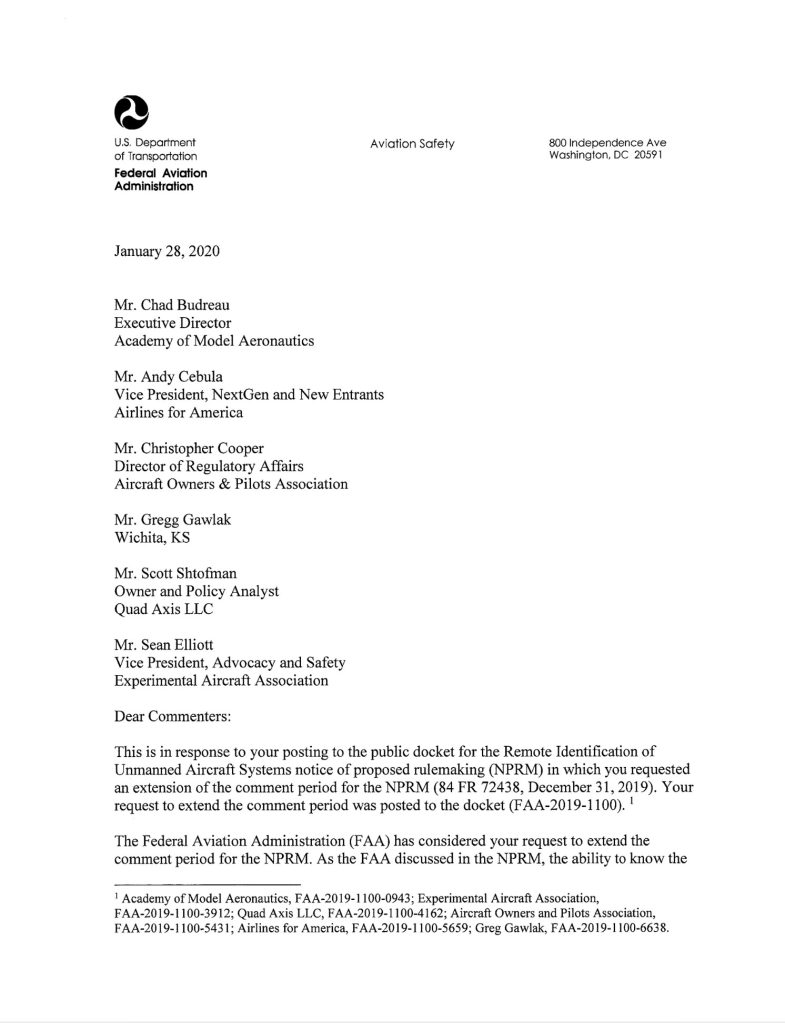 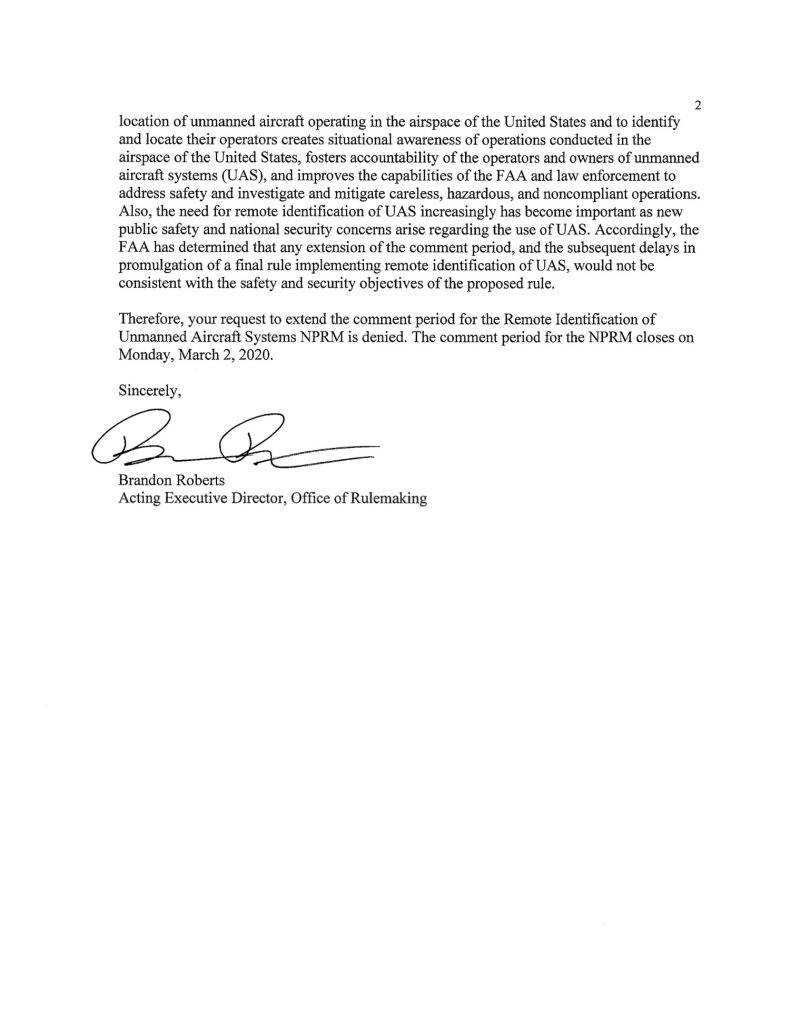 If you want to learn more about the FAA’s NPRM for Remote ID for drones, be sure to read these articles here as well as this Drone Advocacy Kit that has been developed by the Drone U and FPV FC.

And lastly, please be sure to submit your own original comments to the FAA on the Federal Register’s website. Explain to them how these new rules negatively impact your drone hobby and/or drone business before or on March 2, 2020, at the latest!

What do you think about the FAA denying a request to extend the commenting period of the NPRM for Remote ID for Drones? Let us know in the comments below.