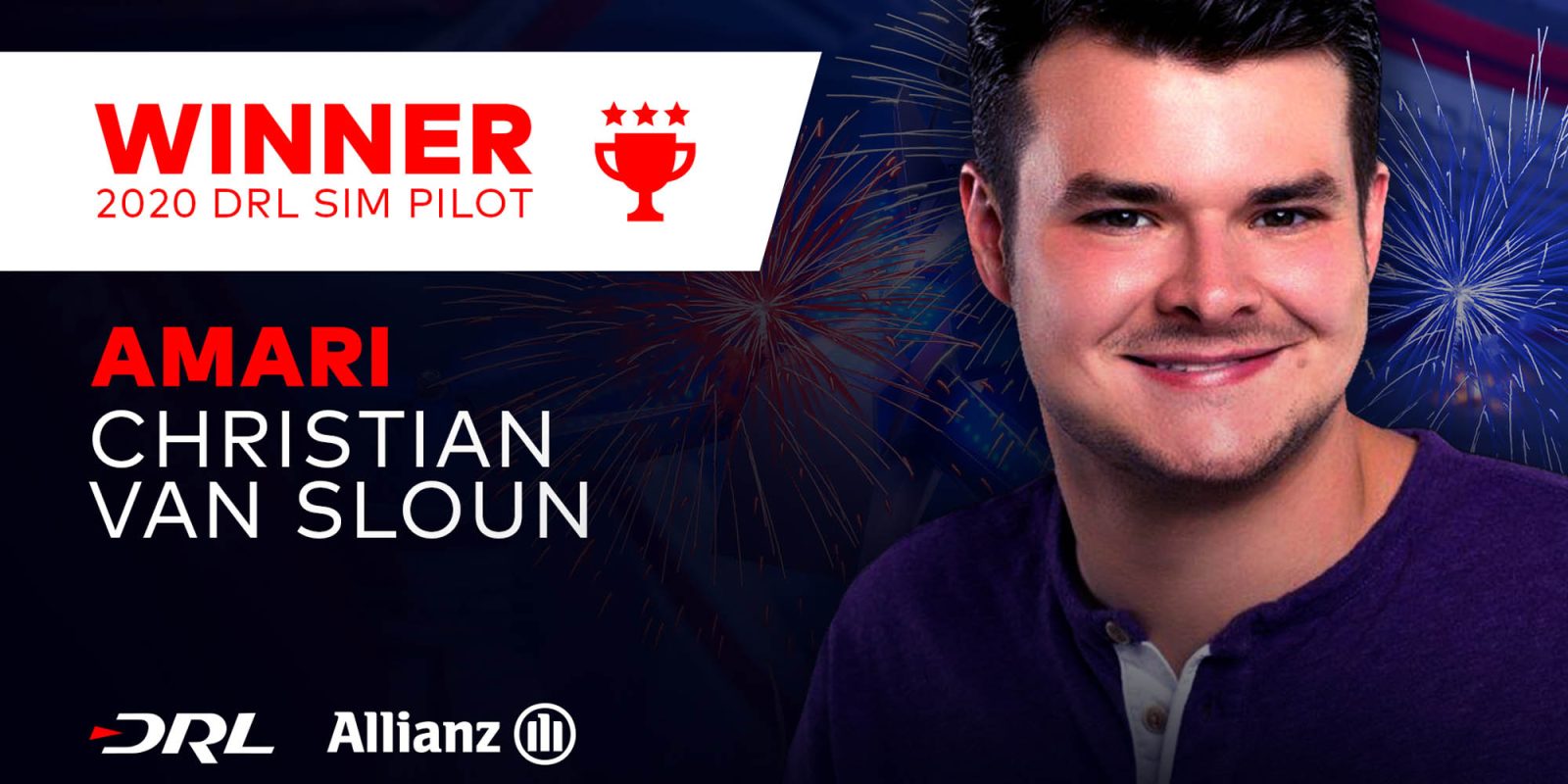 Earlier this week DRL SIM pilots took the virtual skies to tryout for a spot in the next Drone Racing League racing season. Christian Van Sloun, better known as Amari in the drone racing world, has taken the top spot and today we are asking him a few questions about his big win.

We got the chance to speak to the latest winner from DRL’s SIM Tryouts Amari about his big win and a few other questions about the drone racing world. Amari managed to get a perfect score of 50 during his championship race, coming in first place in every heat.

Tell us a little bit about yourself Amari. How did you get into drone racing? What made your tryout?

I stumbled across drone racing by accident! I was home on winter break from college back in 2016, and I remember watching some Overwatch videos on YouTube, and one of the thumbnails on the side of my screen caught my eye. I forget exactly what it said, but it was something to the effect of “Drones Racing at Dolphins Stadium!” I clicked on the video and the rest was history. I was immediately hooked and knew I HAD to get in on that. Competition, hand-eye coordination, and fast paced-adrenaline filled racing were all the traits that drew me to drone racing, and I saw it all first on the video from DRL’s 2016 Season.

I quickly began researching the DRL, how to get on, and how to get one of those LED plastered drones. This is when I learned that the DRL was an incredibly exclusive and prestigious league, only the best of the best were invited to race in the league, let alone get a DRL Racer drone.

At that point, I turned my attention to getting in the air as fast as possible. I was still in college at the time and had little extra money to invest in this new passion, but saved up some money to eventually fund my first drone, Fatsharks, and transmitter. My local hobby shop acquainted me with our region’s MultiGP chapter, and that is really where I began practicing and racing with other pilots weekly.

I can say with 100% certainty that I started drone racing because I wanted to be in DRL. “Iron sharpens iron, so one man sharpens another…”- Prov. 27:17. I have always had an insatiable desire to be the best at what I put my hands to. There is something about having a ton of incredibly talented, passionate, and motivated people all doing the same thing that really brings out the best of everyone, especially in competitive environments. In my opinion, that is the true formula for excellence to manifest itself.

What was the training like for the DRL SIM Tryouts?

I am no stranger to hard work and practice, but I put in a ridiculous amount of time on the DRL Simulator starting about three weeks before the 2020 DRL SIM Tryouts were announced. I have well over 600 hours logged in the game according to Steam, across the last three seasons of Tryouts. If I had free time, it was spent on the sim, getting as intimately familiar with the DRL Racer4 drone as possible.

Throughout all 12 tournaments leading up to the finals, I practiced the new tracks every single week, and by the time the grand finals track was released, I had the #1 time on every single 2020 DRL SIM Tryouts map. I am not one to talk trash, I would much rather let my performance speak for itself, but I knew that by topping all the leaderboards that mattered, I would be getting into the heads of all the other finalists.

Yesterday in the live stream you said you were excited to race Nurk. What else excites you the most about winning the tryouts?

What excites me the most about winning the DRL SIM Tryouts is hard to explain to someone who does not eat, sleep, and breathe IRL drone racing.

DRL is the big leagues. It IS the end goal of all drone racing. Everyone looks at the DRL roster of pilots and thinks “Man… those are the guys who MADE it.” Not to down-play MultiGP or any of the other 5″ leagues, because they are also INSANELY competitive, but MultiGP always felt like a weekend pick-up game of basketball, with everyone playing and looking at the DRL like the freaking NBA.

I am so blessed and excited to have the opportunity to rub elbows with the best gimbal jockeys in the world. It is a real privilege to fly in DRL and be accepted into this amazing league and call their incredible pilots my competitors.

What would you say to aspiring pilots wanting to get into the world of professional drone racing?

Get out there and do it. There is not a cooler sport out there, nothing is even in a close second, in my opinion.

I am living proof you can do it. I was just some kid from Iowa when I first watched that YouTube video. Everyone has dreams, everyone has desires, but they will not fall into your lap unless you drop them there.

Put in the time, find a way to make it happen. I had absolutely 0 idea where to start and had to do a ton of research and get a lot of help from my local FPV group (515FPV) to even get me off the ground. I found a way to overcome every obstacle that faced me. I did not have money to get going so I found a way, made a plan, and made it happen. And I cannot tell you how many nights I stayed up grinding with Chief until 2 or 3 am and still make it to an 8 am lecture.

YOU are the only bottleneck to your own success. If you want it, if you TRULY want it, you will find a way to make it happen.

Amari is known in the drone racing scene to use a rubix cube, today we find out why he uses it.

When did you start playing with a Rubix cube between heats?

During last year’s DRL SIM Tryouts series leading up to the live final event, I practiced in my apartment, which always seemed to be super cold! This would cause my fingers, and more importantly my thumbs, to stiffen up and if I sat still for more than a couple of minutes, it would start to affect my flying. I had an old Rubik’s cube laying around that I started to use to keep my hands moving and loose between heats. Essentially, it is a cooler fidget spinner.

It’s great to see so many people interested in drone racing and the fierce competition around it. The DRL SIM Tryouts is a great way to allow anyone over the age of 16 to fight for their chance in the big leagues, combing esports with the real-life sport.

Want us to interview someone specific next? Be sure to let us know who in the comments below.