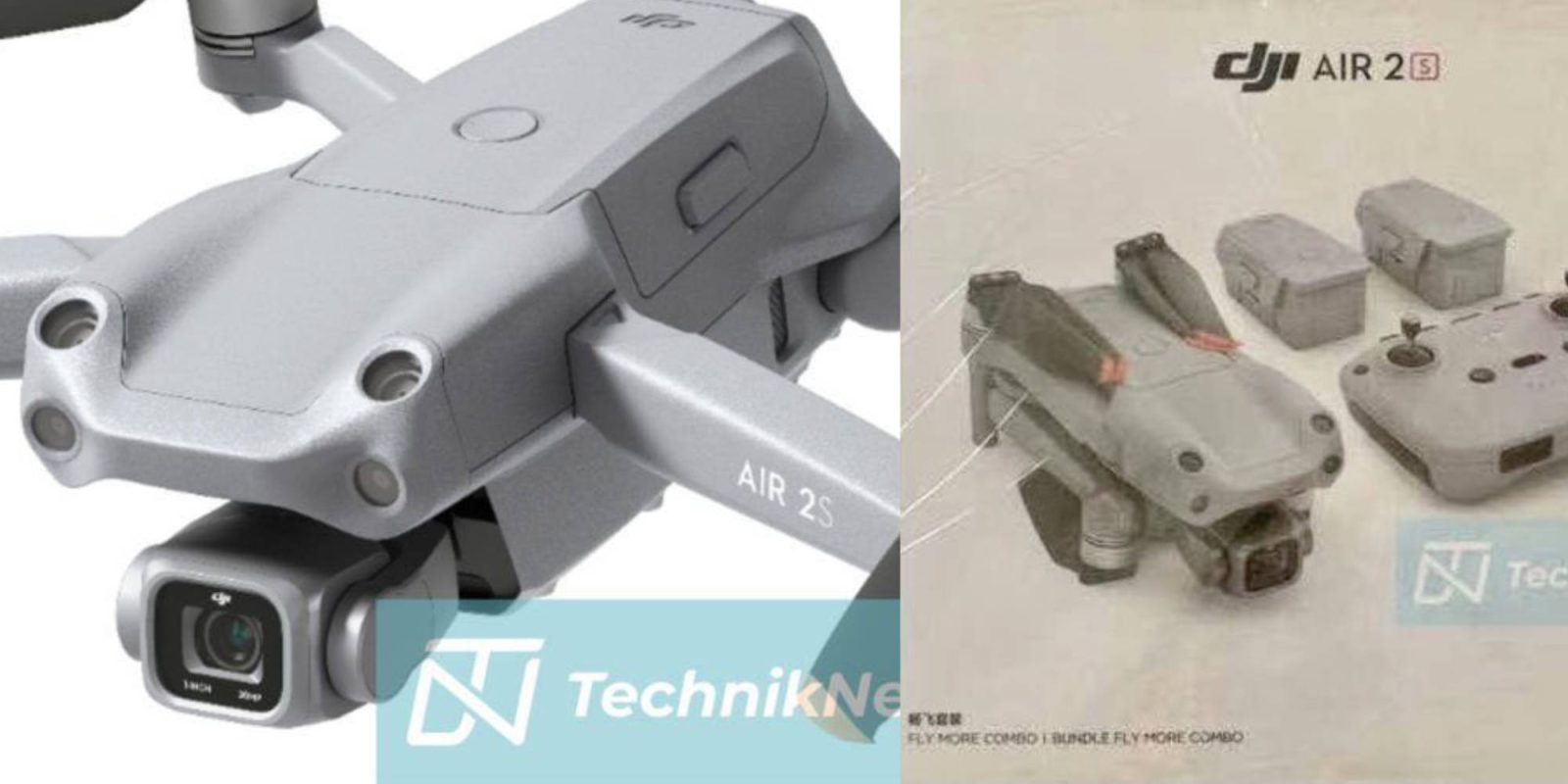 After seeing a video of the DJI Air 2S leak yesterday, the cycle continues with new images of what looks to be the DJI Air 2S’ Fly More Combo packaging and the drone. If the image is legit, this means the new drone is just around the corner and will likely release in the next month or so.

From the packaging, we can see the new branding, DJI AIR 2S, confirming that the Mavic name will no longer be a part of the company’s products. The packaging also shows us that it’s for the Fly More Combo, which from the box will feature two extra batteries and the usual accessories.

The drone’s design is a little different from the original, with the extra pair of sensors on the front top of the drone that we saw in leaks a while ago. We can also see the new camera module, and orange tips on the propellers to show that it’s the S variant of the Mavic Air 2.

Looking at the bottom right, we can see two features shown off. The first is the inclusion of a 1″ CMOS sensor and ADS-B, something that was supposed to be in all models of the Mavic Air 2 but never made it due to the pandemic and component shortages. From the other images, we can also see the arm’s branding has been changed to “AIR 2S.”

Something that was first thrown around when we heard a new version of the Mavic Air 2S was on the way is a 1″ sensor. We now know this to be the case. We don’t know any of the other specs the sensor has at this stage, but it’s safe to say that it will record 4k/60 fps video at 100 Mbps, take 20 MP stills, and 1080p 240 fps slow-motion.

The inclusion of the 1″ sensor does mean the end of the Mavic 3 as we know it, with the only possibility of it coming back if it replaces the Phantom line. You can read more about our thoughts on the Mavic 3 now that the Air 2 is coming.

The first one is DJI Airsense, also known as an ADS-B receiver. When the Mavic Air 2 was released, DJI announced that it comes with an ADS-B receiver inside it, allowing the drone pilot to know if there are aircraft flying nearby. Soon after, it became apparent that only the drone’s North American model would ship with this new sensor as COVID-19 created stock shortages, forcing DJI to leave it out of the international model.

From the packaging, it’s apparent that DJI has managed to get production levels back up to where there will be enough for all units. This is a welcomed addition as there have been many cases since the launch of the Mavic Air 2 that AirSense has come in handy, saving the drone and the nearby aircraft.

There is no official mention of OcuSync 3.0 yet, but it will likely be included in the upcoming drone. OcuSync 3.0 was developed and released with the DJI FPV Drone to keep up with the high flight speeds requiring a lower latency connection.

Taking a look at the FCC label, we can see the DJI Air 2S has a 3500mAh battery, which is the same capacity as the current Mavic Air 2. So it looks like this upgrade is focused on the camera side of things, with the new 1″ sensor and two more obstacle avoidance sensors, while updating the drone with the ADS-B and OcuSync 3.0.