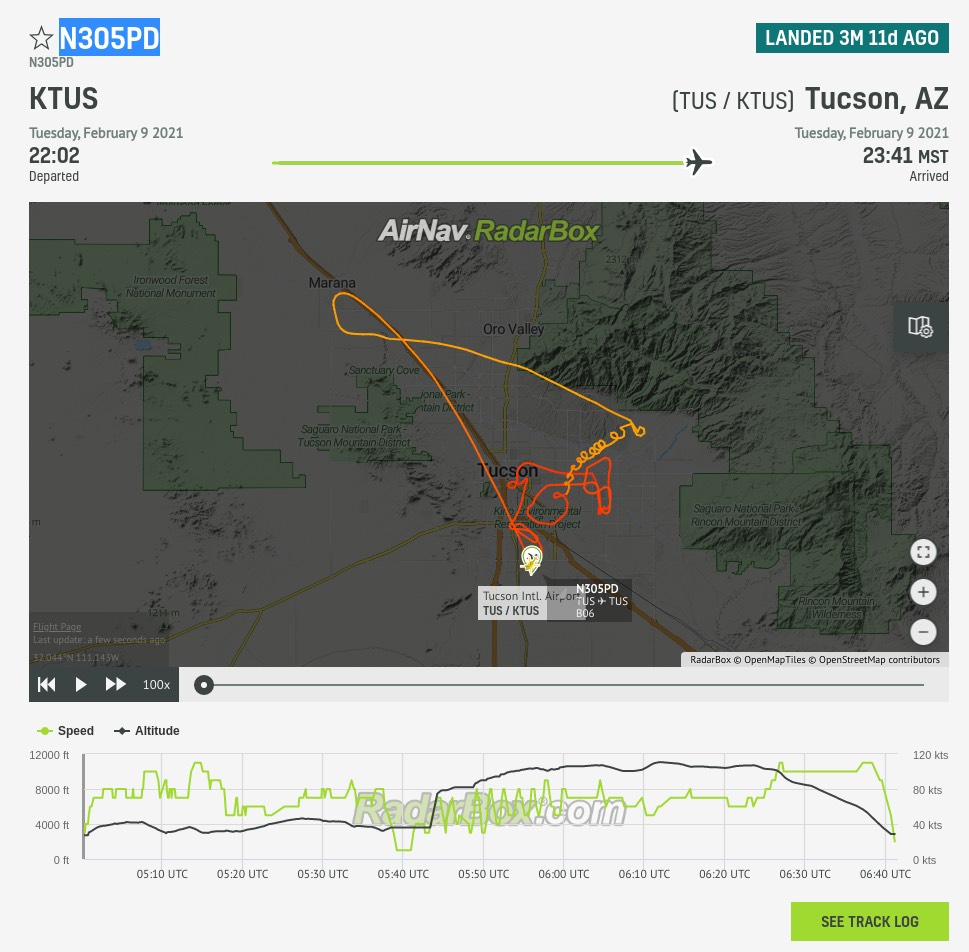 The Federal Bureau of Investigations (FBI) is actively hunting the pilot of a drone that buzzed a US Customs and Border Protection (CBP) helicopter in Tucson, Arizona. Once it did, the night-flying, clearly steroid-amped craft racked up a laundry list of other infractions before it suddenly, maddeningly vanished.

The FBI revealed the Feb. 9 incident on May 20. In doing so, it said a CBP chopper reported being closely dogged by a “high-powered” unmanned aerial vehicle (UAV). That description was an understatement. In reports by Tucson TV station KOLD, FBI officials said the “heavily modified” drone ascended up to 14,000 feet and “orbited” the helicopter several times. When the CBP turned the tables and pursed, the UAV led the copter on a circuitous, hour-long chase over a 70-mile range at speeds of over 100 mph. It then it disappeared.

While fleeing its CBP stalker, the drone violated airspace restrictions around the Davis-Monthan Air Force Base, and may have done the same near Tucson International Airport. The FBI’s statement underlined the myriad no-no’s the jaunt involved.

In 2018, The Federal Aviation Administration Reauthorization Act included 18 USC 39B, which federally criminalizes “Unsafe Operation of Unmanned Aircraft.” Specifically, knowing or reckless interference or disruption of a manned aircraft, and the operation of unmanned aircraft in close proximity to airports. While the drone(s) did not come into direct contact with an airplane or cause a pilot to make an evasive maneuver, the actions are illegal and extremely dangerous.

That last sentence, however, contradicted remarks given both by a CBP agent in the helicopter, and the Fed in the KOLD report. Both stated evasive maneuvers were taken to avoid collision with the UAV. This piece also gives a very complete, tech-savvy account of those and other details known up until now.

According to KOLD’s G-Man, the drone was between four to six feet in diameter, and operated on either four or six rotors. He also offered the not terribly stunning deduction that if the craft had been bought off the shelf or over the web from a manufacturer, it certainly got a big-time makeover later.

Major enhancements would have been obligatory to enable a commercial drone to fly that fast and reach such high altitudes. Given the hour-plus workout it went through, meanwhile, its battery must have been considerably juiced as well.

For now it’s a toss-up as to how it was piloted.

Authorities who monitored the helicopter-drone chase are convinced the fast, precise evasive maneuvers the UAV executed indicate the pilot must have clearly seen the craft and situations it faced to pull them off. Others argue the wide area and long distances covered suggest the pilot was in Beyond Visual Line of Sight mode – adding, presumably, another FAA infraction the drone-load of others.

The truth is (presumably) out there

Given the lingering excitement surrounding last week’s 60 Minutes segment on UFOs, meanwhile, there will be inevitable speculation the Feb. 9 encounter was another X Files case of which the government used to deny knowledge – and now details in its effort to solve them.

The proximity of the air base, by contrast, will leave some wondering whether a secret military super-drone project blew its cover by air-taunting a fellow government craft. And given Tucson’s proximity to the border, questions may also be asked whether recent attempts by Mexican drug cartels to weaponize drones aren’t now being exported to the US.

The only thing that can be said for certain is, when we find out who was behind it all, you’ll be the first to know.