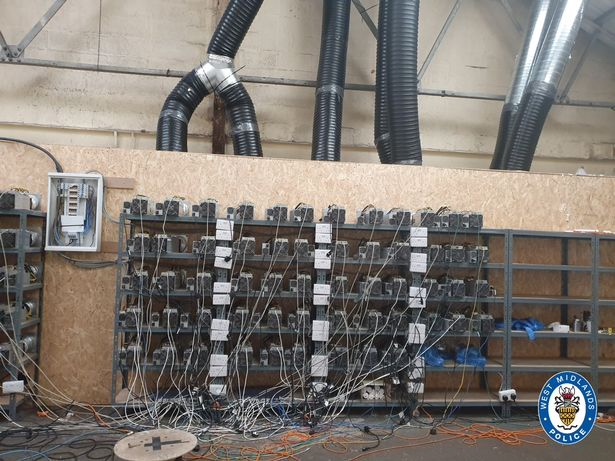 Police in the UK raided a building in a West Midlands warehousing zone after readings taken by their drone convinced them a large marijuana farm was inside. Instead they found a massive operation illegally mining Bitcoins.

The cops converged on the rather lavishly named Great Bridge Industrial Estate outside Birmingham after their drone picked up excessively high heat readings coming from one of the buildings. Experience had taught them drone detection of such high heat radiation was a dead giveaway of illegal pot cultivation. Especially, as in this case, when the rather crummy building unit was visited several times of day – and at all hours – by numerous people.

Pre-raid surveillance of the building also spotted considerable wiring and ventilation added to it, which was thought to be used to both create and regulate a hothouse effect to boost cannabis plant growth.

But when cops stormed the unit on May 18, they didn’t find large, leafy verdant stocks sporting ponderous buds on the ends. Instead, they gazed upon 100 high-powered computers hooked up to one another and busily mining Bitcoins. No one was present when the discovery was made, but the PCs and other gear has been confiscated for having been used in illegal activity.

Drones (and cops) more used to pot than crypto

Ironically, what made the entire operation a criminal offense wasn’t simply existing (as would be the case in the UK with dope farms). Instead it was that the organizers had tapped into the area’s electrical system to draw off several thousand dollars’ worth of energy without paying for it.

“My understanding is that mining for cryptocurrency is not itself illegal,” Police Sergeant Jennifer Griffin told the Birmingham Mail. “But clearly abstracting electricity from the mains supply to power it is.”

Previous detection of excessive heat radiation by drones has tipped police in Britain and around the world to illegal indoor pot farming. For that reason, Griffin says, her forces were more than a little bit taken aback at the kind of fire their drone smoke detector had drawn them to.

“It had all the hallmarks of a cannabis cultivation set-up,” she noted. “(And) it’s only the second such crypto mine we’ve encountered in the West Midlands.”

The complex process through which crypto currencies are mined is notorious for consuming outrageous amounts of electricity. Some critics are refusing to accept the virtual money (and Ponzi-esque investment structure on which it is based) as environmentally harmful, and urge others to follow suit. Eco-minded fans of the tech, by contrast, are trying to find sustainable ways of mining it.

In the end, however, it may be easier to grow weed. And with many places having legalized the drug and its cultivation, the risks of having your drone shot down over an illicit farm may now be lower than hovering it over illegal Bitcoin mining ops.