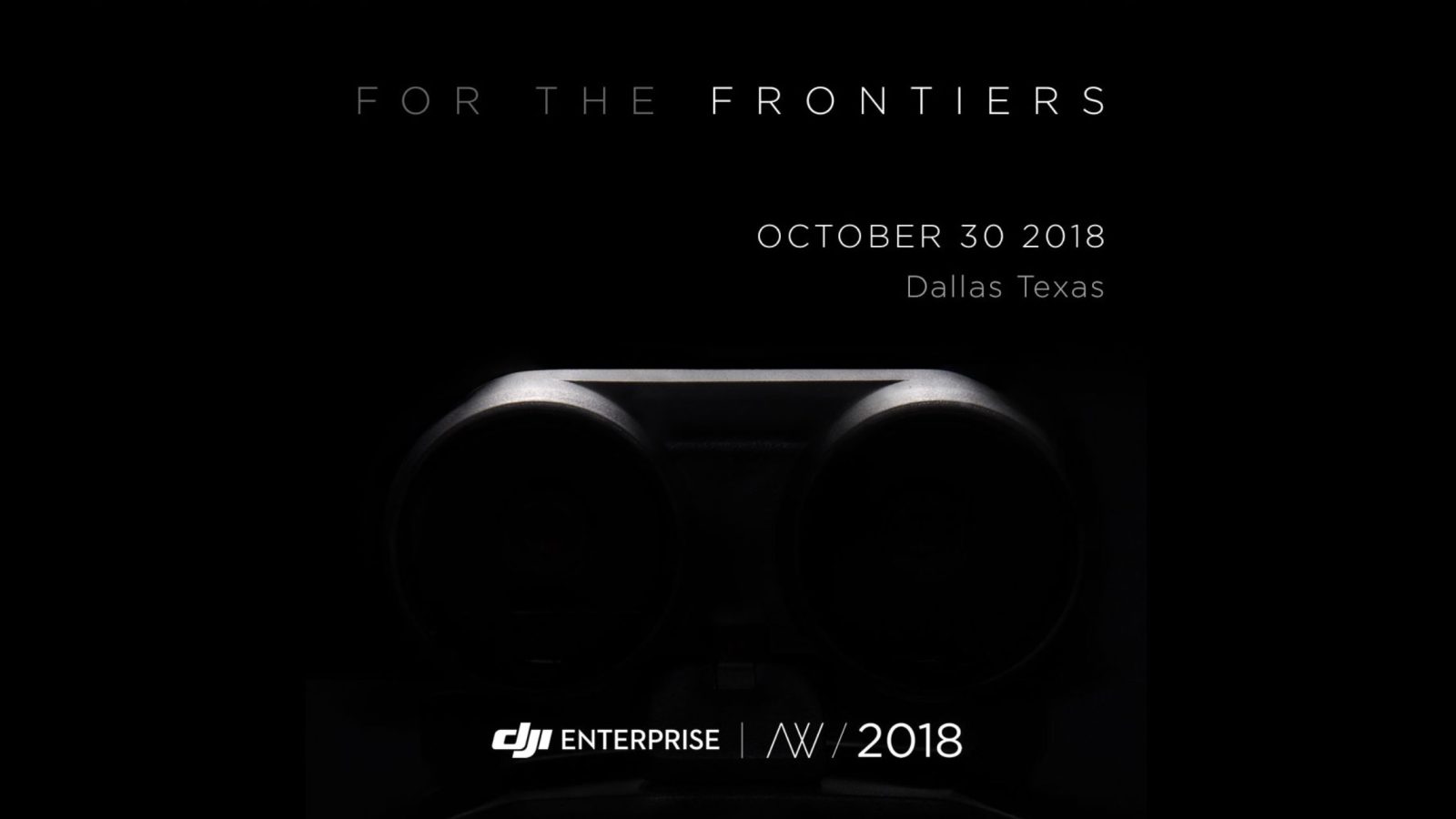 Next week DJI’s annual commercial drone event, DJI Airworks will take place in Dallas, TX. Many of us are expecting the Chinese drone maker to launch the DJI Mavic 2 Enterprise Edition, which was recently confirmed in these FCC filings, at the event. Earlier this summer we already saw some high-resolution images of the drone as well as a few leaked images with different devices mounted on top of the drone. Now DJI Enterprise tweeted this mysterious announcement “For the Frontiers” with an October 30th date. The announcement says “It’s time for our ‘biggest’ unveil of the year” and includes an image that shows the outline of what almost seems to be a pair of binoculars. It seems safe to say the DJI will be announcing the new Mavic 2 Enterprise later this month. The remaining question is, of course, what is that thing mounted on top? Let’s take a closer look.

Other people have shown this as well. When you import the DJI announcement in Photoshop and play around with the brightness settings and levels, you can get a lot more detail out of the image than DJI probably intended. Take a look at the image below. 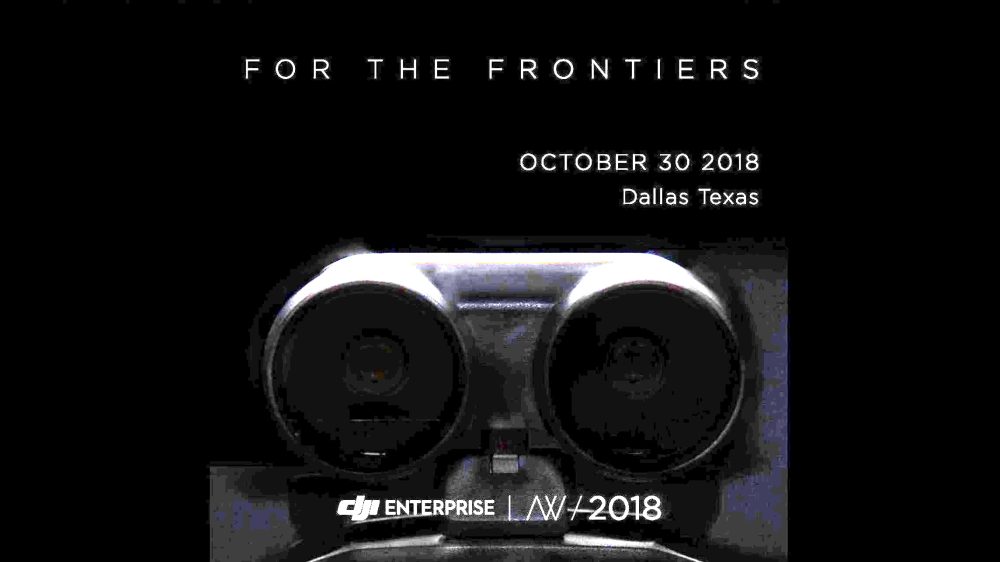 What initially seemed to look like a pair of binoculars, now looks like a pair of dual cameras for stereoscopic 3D photos and video. B&H sells a product that looks very similar, the Z CAM K1 Pro Cinematic VR180 Camera. On their site, it says that this camera is:

“a Google VR180-certified, dual-lens video and still camera available exclusively at B&H. Capture immersive 180˚ views of your experiences, then view them as you prefer in either 2D, or in 3D using a VR headset. The stereoscopic K1 PRO employs dual Sony EXMOR 4/3″ Thirds CMOS sensors for image recording, and offers robust post-stitching output rates of 6K at 30 fps, or 4K at 60 fps. A Gigabit Ethernet port enables you to live-stream your event using the downloadable Z CAM WonderLive software (PC), and to control the K1 PRO using the Z CAM Controller software (PC or Mac).”

Could it be that DJI is launching a similar dual camera setup for stereoscopic 3D photos and video? It might well be. In the other leaked photos of the Mavic 2 Enterprise, we what seems to be a speaker and a LED beacon for night-time flying mounted to the top of the drone. When you look closely at the brightened up image of the dual camera setup you can see a mounting solution that is very similar to the one used to mount the speaker. It would possibly allow you to change the angle of the device as well. The lines below the mount seem to match the line of the top of the Mavic 2 as well with the two angled surfaces or sloping sides. 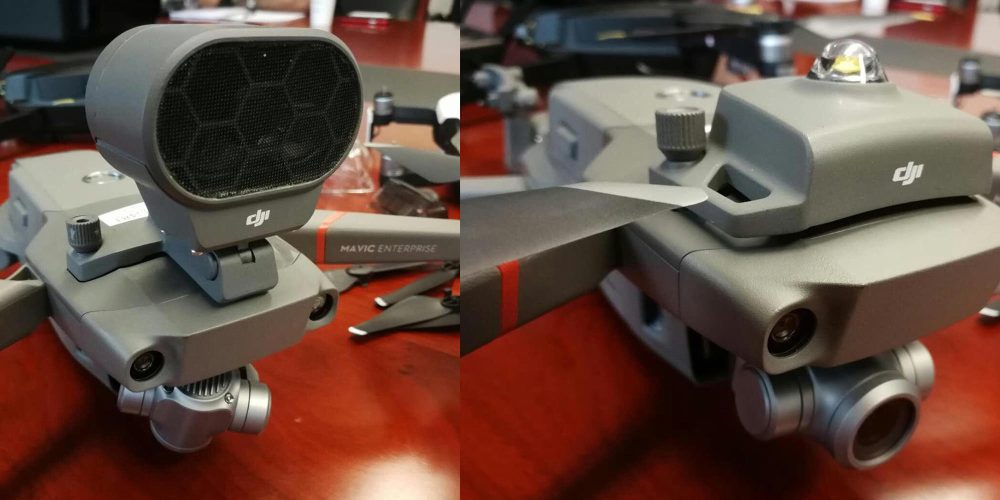 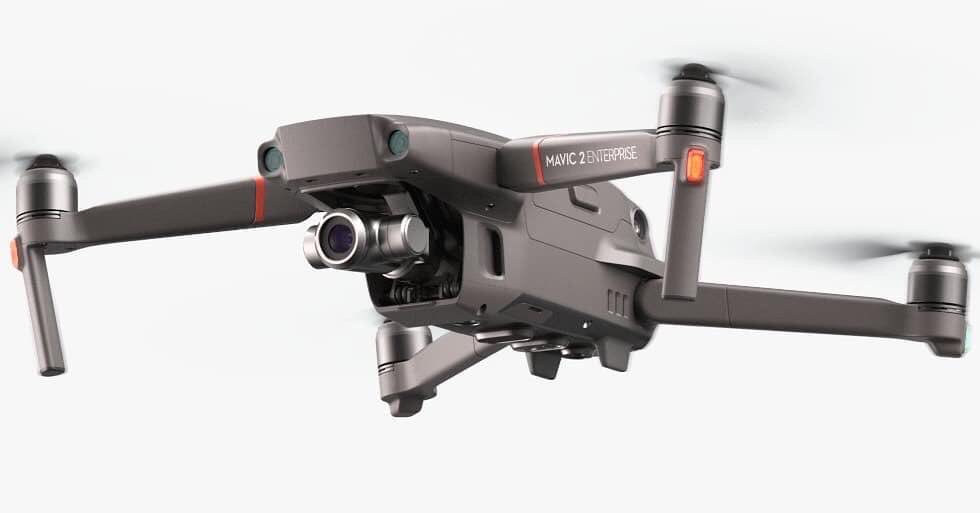 The French drone company Parrot already brought a small foldable drone to the commercial drone market with the introduction of the Anafi Work at InterDrone recently. It now seems that DJI is doing the same with the introduction of the Mavic 2 Enterprise with various devices such as a speaker, a LED beacon, dual cameras for stereoscopic 3D photos and video and possibly others such as thermal imaging sensors that can be mounted to the drone.

DJI just sent out another tweet with a new photo. See below.

Which looks like a 360-degree camera once you brighten up the photo a bit. It seems like we will be seeing many different attachments from DJI. 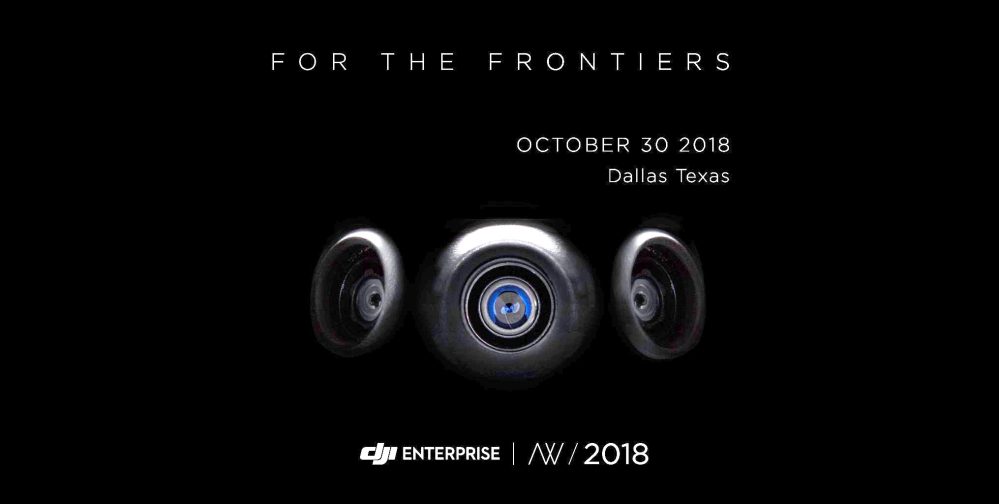 What do you think is displayed in DJI’s “For the Frontiers” announcement? What kind of attachments would you get most excited about? Let us know in the comments below.

It's time for our 'biggest' unveil of the year.
Join us at the frontiers: https://t.co/nLtOoLzHHN pic.twitter.com/bqIHyXTwgr