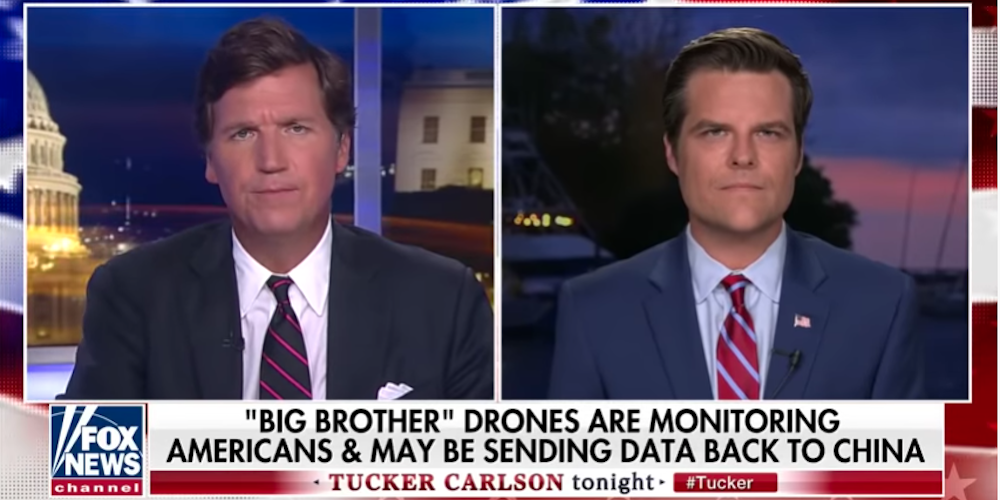 DJI is by far the biggest player in the drone industry. And that’s troubling to Matt Gaetz, a Republican congressman representing Florida. Gaetz took his case to the Tucker Carlson show on Fox News this week with a full-throated assault on the China-based company.

“China is massively expanding a trojan horse spying operation in our country, and your local police department may be unknowingly helping them,” Gaetz told Carlson. At issue is DJI Enterprise’s Disaster Response Program, which loans the company’s drones out to local government first responders. The program launched in September but has expanded rapidly during the coronavirus pandemic, with cities using drones for tasks like making public service announcements about social distancing or even finding homeless encampments to help with outreach efforts. To date, the program has loaned about 100 drones to 43 public service agencies — mainly police departments — in 22 states.

Gaetz asserts that these drones are transmitting information back to the Chinese government in all their operations. This is a claim that DJI strenuously denies, and there is no clear information that such transmissions are happening. In response to an earlier Fox News article about DJI and alleged spying, DJI spokesman Adam Lisberg insisted that the default for the drones is to not transmit photos, videos, or other data to anyone. “None of this data is ever transferred to DJI or anyone else unless [customers] deliberately choose to do so,” he said.

Gaetz, however, points out that both the US military and the Department of Interior have banned the use of DJI drones in their operations. He also cited a Department of Homeland Security report claiming that the Chinese, through DJI, specifically target police departments in their outreach efforts. “This is precisely the information we worried that China might sell to terrorists,” said Gaetz, summing up the report.

None of this appears to be new information. Although he says he conducted his own investigation, Gaetz’s remarks on Fox seem to echo past charges against DJI. A DHS report from last year, for instance, warned of the possibility that drone systems made in other countries could transmit data back to the country. It did not find a smoking gun showing that DJI or other drones are in fact collecting data for the Chinese government.

What’s new is Gaetz’s proposed remedy: calling for the US Justice Department to get involved. “I believe the attorney general, under the existing authorities he has, under the cybersecurity laws, should immediately ground the entire fleet of DJI drones used by US law enforcement,” said Gaetz.

But to date, there hasn’t even been consistent action on drones at the federal level, much less reaching down to municipalities. In March, US news outlets reported that the Trump administration was preparing an executive order to ban drones made in China. However, that has yet to materialize. Foreign drone bans that single out China have been introduced in US Congress, but they have failed to move forward. And all of these ban efforts would apply to purchase and use by the federal government, not by state or local governments.

Local governments have embraced drones in recent years, and not just during the COVID-19 era. Police departments are increasingly using drones for operations such as search and rescue, for instance. And some police departments use drones to get an early and unique eye on emergency situations. In the town of Chula Vista near San Diego, for instance. Drones are dispatched as “first responders” on police and fire calls. In half of cases, they actually arrive slightly before the emergency personnel. The city credits drones with assisting in about 270 arrests, for instance. Recently the city of Clovis, also in California, began its own pilot program of drone first responders.

Not all of these programs use DJI drones, or use them exclusively. Chula Vista, for instance, has been using drones from DJI as well as US-based drone maker Skydio. (In a conversation with Skydio, its chief operating officer Tom Moss made sure to emphasize to me that Skydio designs and builds its drones in the United States.) In fact, Skydio recently launched its own emergency drone program for first responders.

But DJI is a giant in the business. It makes a vast range of drones from introductory consumer models like its Mavic line to sophisticated enterprise products like its Matrice family (which is due for an expected refresh this week). The company’s drones fly well, are easy to fly, and are priced attractively. It would be hard for cash-strapped local governments to turn away from the company, especially when it’s offering some models for free.

And shutting down a few dozen police department projects will not do much to shrink DJI’s footprint in the United States. Far more drones are in the hands of consumers as well as professionals who use them for tasks like site surveying, journalism, and real estate photography.

Some backlash is real

Gaetz’s campaign against DJI is just one chapter in the backlash against drones in the COVID-19 era. Civil rights advocates have also questioned the gathering of information when drones are sent out to monitor social distancing. In late May, Canadian drone maker Draganfly’s tests of a “pandemic drone” were shut down by popular opposition in the town of Westport, Connecticut. This drone program would have not only observed crowds for social distancing but also taken health readings of crowds to track the spread of the disease.

But when the drone used in monitoring is Chinese-made, the backlash takes on an entirely new dimension.

Certainly, if drones made by any company from any country were secretly collecting information, they should be shut down. But so far, no conclusive evidence has emerged, despite a lot of concern over the perceived problem.