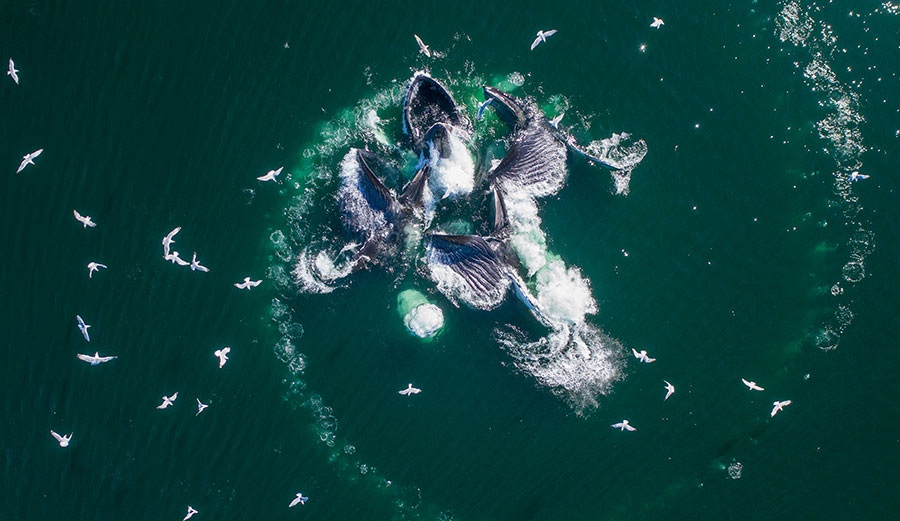 Drones have captured rare footage of migrating humpback whales off Australia, including unprecedented shots of them “bubble-net feeding” so far north.

The video was taken during the annual migration of humpback whales to the warmer waters off Australia for their breeding season. Prior to that, the creatures habitually undertake a prolonged feeding period in Antarctica – a real gorge-fest to get them through the arduous efforts of procreating. The drone footage, however, was the first time the humpback’s “net-bubble feeding” frenzies in Antarctica were seen replicated as high up as Australia.

An additional reason the drone video is extraordinary is that it documented the presence of a “super group” of whales in Australian waters – in this case, 33 individuals in all. According to reports in the online magazine The Inertia, that large a number is unique in the area, with most “super groups” sighted in other parts of the world, and in smaller sizes.

So now the big question: just what is “bubble net feeding?”

It’s a process in which whales blast air from their nostrils to trap fish, krill, and other prey in relatively small balls of oxygen. Then, either the snorting whales or others in the group rise from below, open their mouths, and eat their air-ensnared dinner.

Sighting and documenting “bubble net feeding” so far north is important to researchers’ work tracking evolving whale behavior. Humpbacks usually pig out before leaving Antarctica – fishing in that same bubble-snorting way – so they don’t waste time during the June-August breeding season to hunt. Once fruitful and multiplied, they head back down to Antarctica and their feeding waters. Though humpbacks have been known to start snacking on the return trip, they’ve always been seen doing so in Australian waters eating on their sides, or below the water’s surface.

The drone video shot last September during their return, therefore, is the first time humpbacks have been known to take their Antarctica-reserved feeding routine on the road. Like other whale spectacles, it can be both awesome and majestic.

Researchers are theorizing about why the humpbacks changed their habits. One theory is they discovered a feeding opportunity too promising to exploit in less efficient ways. Another is that environmental changes have influenced  a modification of their behavior. Or, happily, it may be a consequence of the increase of humpback whale populations since whaling was ended in 1960s.