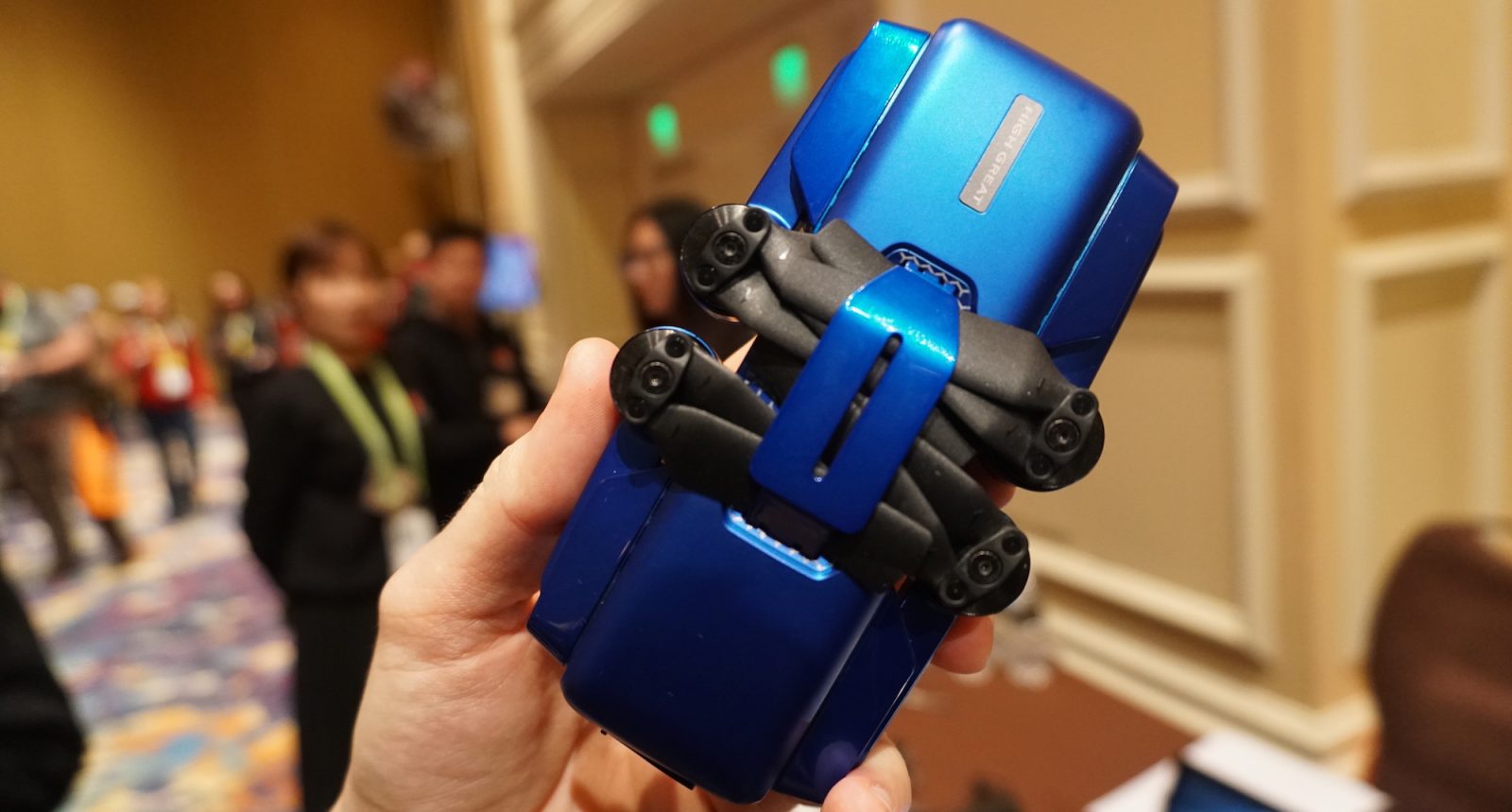 Shenzhen-based HighGreat is showing off a couple new drones at CES 2018 this week, both of which target the middle-to-low end of the consumer drone market — which is currently dominated by DJI with its Mavic and Spark. The drones go by the names “Mark” and “Hesper”, respectively,  and both fold up a la the Mavic, making them portable, light, and easy to carry.

The cheaper of the two drones — and you can definitely tell that it’s cheaper when you hold it in your hand — is the Mark, which shoots 4K video with its static Sony IMX 214. I couldn’t get an answer on whether or what kind of stabilization the drone has. It gets 18 minutes of flight time on a charge (via a 1,300 mAh battery that’s removable), and it uses microSD for storage.

One interesting thing about the Mark is that it’s almost the same size and weight of the DJI Spark — perhaps just a little bigger in wingspan and a little lighter in weight. But even at that size, it folds up entirely, just like the DJI Mavic and other foldable drones we’ve seen this week. It also has an interesting little slot for the props, and I could almost fit it in my pocket.

Unlike the Spark, the Mark can’t be used with a true RC — you’re stuck using it with just the HighGreat app. Based on what I saw tonight at Pepcom, it seems to fly pretty well despite this — although not as stable and as the competition, and definitely not as well as HighGreat’s second drone, the Hesper.

If the Mark is the foldable, under-specced DJI Spark in this analogy, then the Hesper is a smaller, cheaper version of the Mavic. Unlike the static camera of the Mark, the Hesper has a single-axis gimbal, actually works with a true RC, and has visual tracking. Interestingly, despite having the same Sony IMX 214 sensor as the Mark, the Hesper doesn’t record in 4K.

The Hesper’s biggest advantage besides it superior build quality — I could definitely tell a difference, just holding them in my hand — is that it can truly be used at significant distances. The app-based control of the Mark is limited to 60m, but the RC control of the Hesper can let it fly up to 800m away. The Hesper has a larger 1,950 mAh battery but gets the same 18 minute flight time.

As mentioned, the Hesper definitely feels like a much higher-quality drone than its sibling. But even being the better of the two, the build quality was my first concern when getting my hands on these. You can tell just picking them up that they aren’t as durable as DJI’s offerings, and I’d be nervous dropping them from shoulder-height, much less from an accident while flying.

HighGreat was wary to share pricing and availability information with me (presumably because it isn’t quite yet set in stone?), but they said the smaller Mark drone is expected to launch in April and will be available at retail for around $299, while the larger Hesper will be available in March for $499. The company didn’t specify which US retail outlets — if any — will sell the drones.