Today’s the first day of the press festivities at CES 2018, and tonight’s event, Unveiled, serves as a showcase for hundreds of tech companies — from little startups to international conglomerates.  Drones have become a popular attraction at CES, and in the mix of everything from radiation-protection underwear to smart smoke alarms we managed to find a few drone companies…

GDU is here at CES unveiled showing off their latest GDU O2 drone. The drone was actually announced back at InterDrone in September, but GDU says that it’s finally going to start shipping next week. We’ll hopefully get a chance to see this drone in action at GDU’s booth this week and get some footage. It’s basically the same concept as the DJI Mavic, but GDU says it was actually first to the foldable drone concept.

GDU, which previously went by the name ProDrone, launched its foldable Byrd drone back in the beginning of 2016 and followed it up with some more advanced versions later that year. Now, GDU is hoping to enter a slightly more affordable segment of the market and compete with the DJI Mavic with its smaller and more portable version of that original foldable design — the GDU O2.

Another drone company exhibiting here at CES Unveiled is Drone Interactive, a French company that puts together a mashup of AR, tiny drones, and gaming controllers to create a drone-based gaming experience. They’re apparently developing “interactive attractions” for amusement parks, but all I saw on their demo was a guy wearing a VR headset and playing a game through the viewpoint of the drone.

Step into a new era of entertainment experiences. We are developing the next generation interactive attractions for theme and amusement parks based on the latest drone and AR technologies.

We’ll be getting a chance to see Drone Interactive’s product in action on the CES floor later this week, so stay tuned for that. Apparently they’ve developed a Mario Kart-like game, so it should be interesting. Their drone looks like one of those little toys on Amazon.

The last drone company we found on the floor of CES Unveiled was Eyesee, which builds inventory management drones for warehouses. The drone uses technology from Squadrone System, Hardis Group, and Zebra to make a system built for logistics warehouses. Obviously, the idea to to minimize human and material resources as much as possible and automate the process.

The drone itself is made almost entirely of styrofoam to keep its weight down, and it has sensors and cameras on all sides to autonomously capture information on pallets. Eyesee says that the drone handles all barcode formats and that its solution can do warehouse tasks that normally take 2 humans 90 minutes to do in just 10 minutes. The company already has clients all over the world. 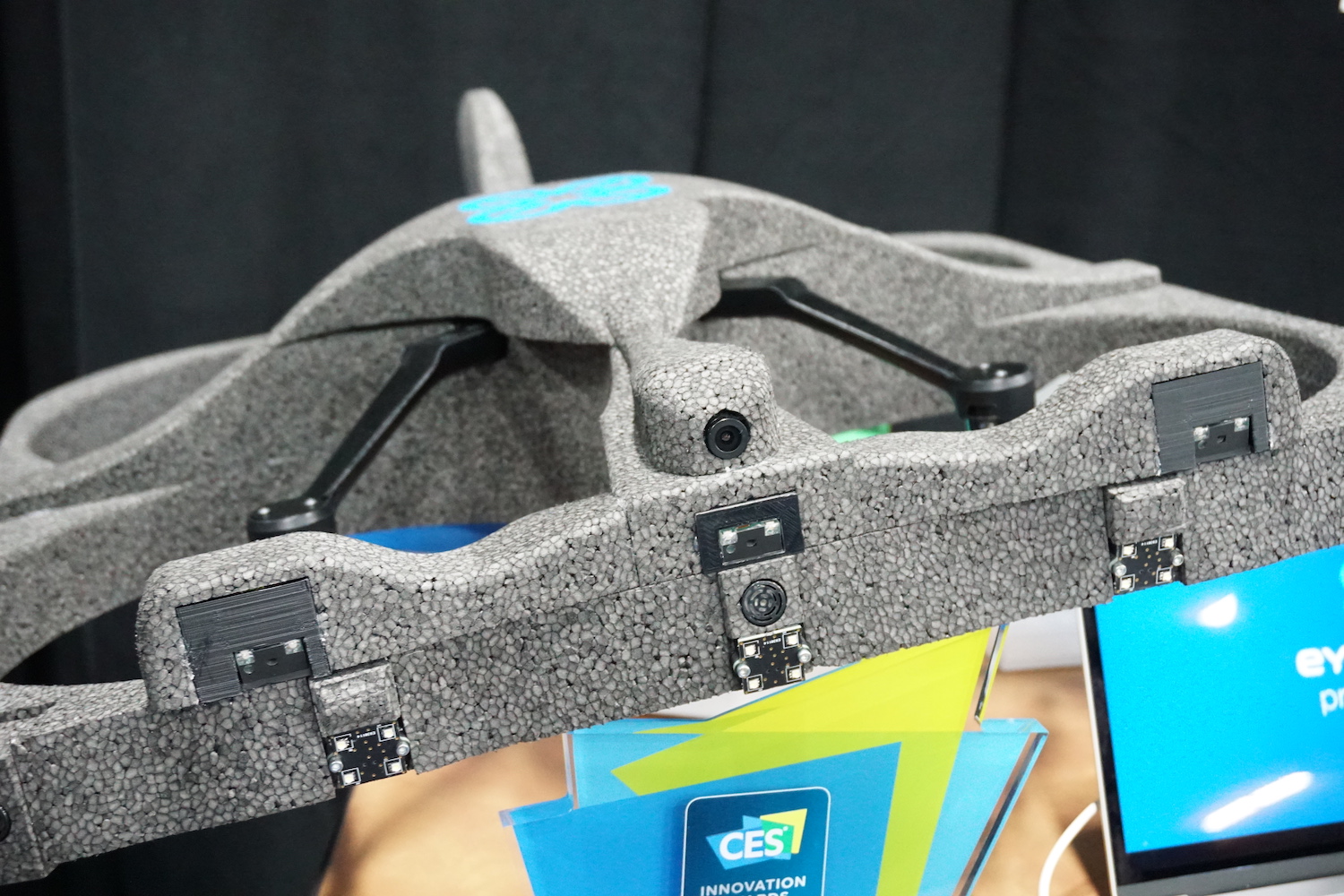 Stay tuned to DroneDJ for more drone coverage from CES 2018! These three companies were the ones we found at CES Unveiled, but there will undoubtedly be dozens more on the floor of CES this week.