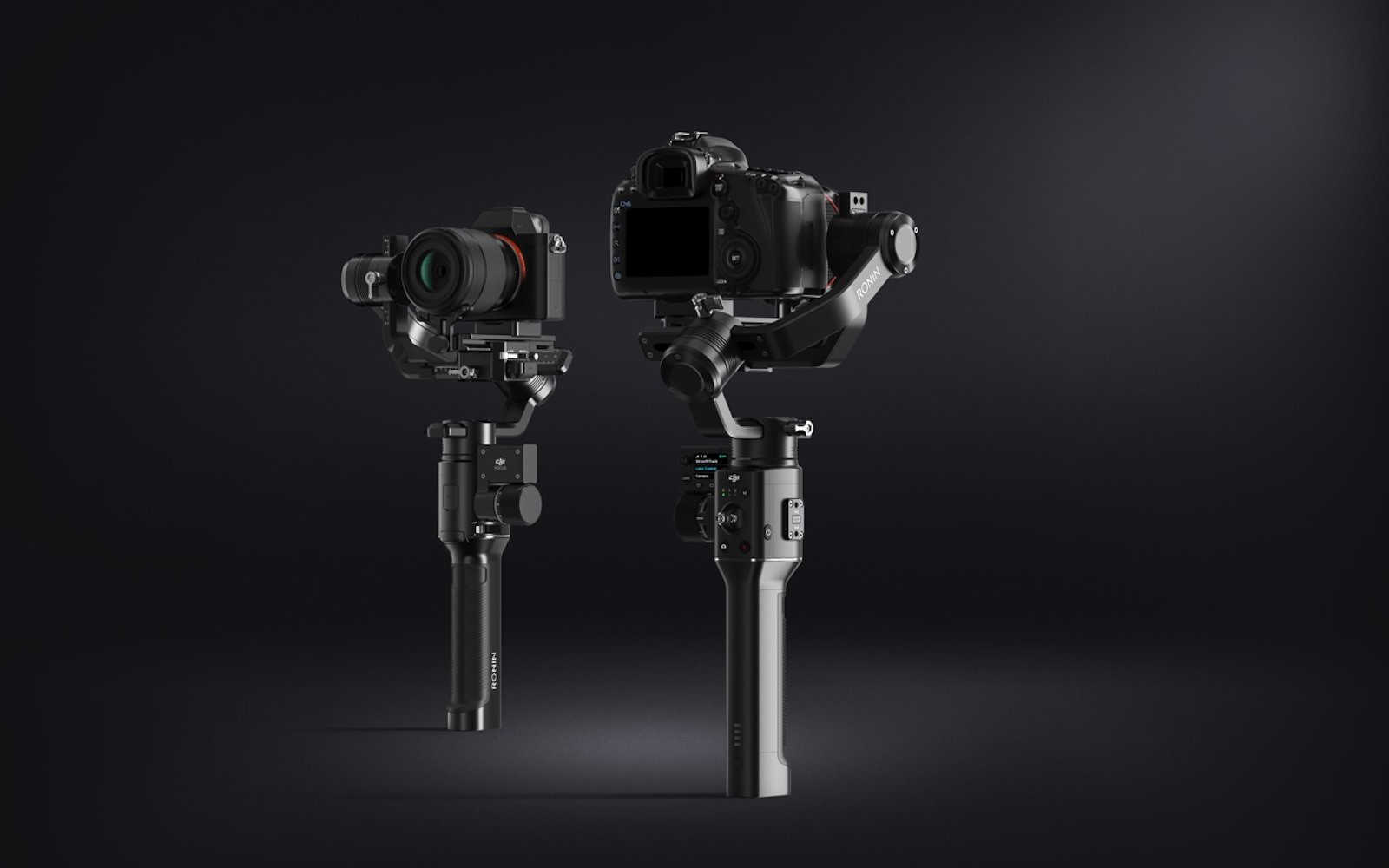 Yesterday, DJI announced their all-new DJI Ronin-S stabilizer. It will come in two different sizes to support both mirrorless and D-SLR cameras. It will also work with the most common camera and (zoom) lens combinations, such as the Canon 5D, Panasonic GH, and Sony Alpha series. On paper, it seems like DJI has a winner on their hands with the all-new Ronin-S. It has all the features you could wish for, but no word yet on the pricing.

Will DJI price this stabilizer as aggressively as they have priced the redesigned Osmo Mobile 2? Let’s take a closer look.

What does the DJI Ronin-S stabilizer offer?

On paper at least it seems that the DJI Ronin-S offers everything you could ask for when you want to create smooth, stabilized video footage with a mirrorless or D-SLR camera. The Ronin-S is DJI’s first stabilizer that can be operated with one hand and DJI promises that its three-axis gimbal technology will deliver smooth cinematic video footage. The China-based company also claims that the motors of the Ronin-S are so powerful, it even supports zoom lenses that have an extending lens barrel.

DJI focussed on ease-of-use with Ronin-S, for instance, it offers a Push Mode that allows you to manually adjust the pan and tilt axis by hand while the device is turned on. Another nice feature of the Ronin-S is, that it will not obstruct the camera’s screen in upright or even underslung positions. Unlike the Osmo Mobile 2, the Ronin-S does come with DJI’s hot-swappable intelligent batteries so you can keep on filming. 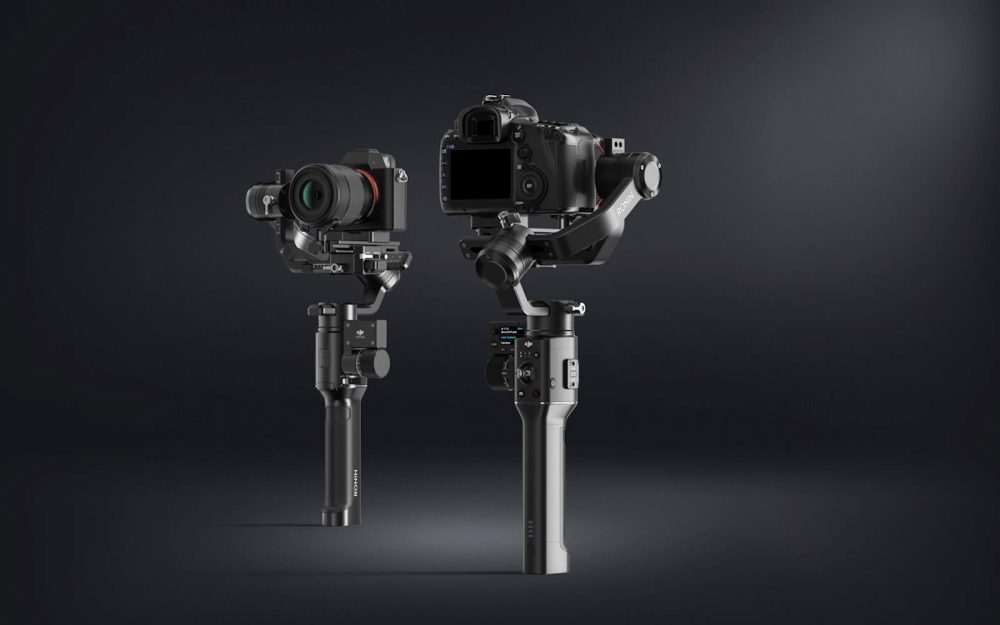 Dedicated controls for the camera and gimbal let you switch between different SmoothTrack settings, record and stop the camera. You can finetune the Smoothtrack settings on the device. A joystick enables you to position the camera easily and get the desired shot. Then there also is a Sport mode that allows you to follow fast moving subjects.

The all-new Ronin-S can communicate with most modern camera systems, such as Sony, Canon, and Panasonic. This allows you to change camera settings and with a DJI Focus Control Center accessory, you can even control the follow focus. The Focus Control Center consists of a focusing dial and a screen allowing advanced gimbal and focus control without a mobile device. 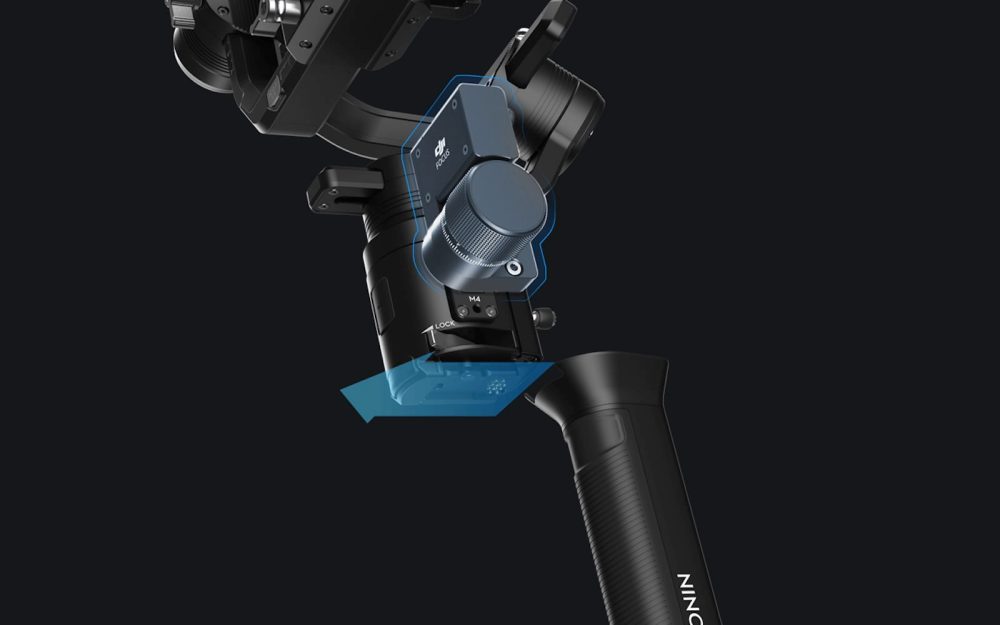 Other accessories that will be available, are a vehicle mount solution, DJI Master Force, DJI Master Wheels, an external focus motor, and a cheese plate adapter so you can use your favorite third-party accessories. DJI will also offer dual-handle support. DJI also offers intelligent shooting modes for the Ronin-S that you can choose through the DJI Ronin mobile app. Included are Panorama, Hyperlapse, Track, and CamAnchor.

Who is the competition?

Well, there are a few competing offerings at various price points, that come to mind. Not all of them offer the same features as the Ronin-S. We will take a quick look at some alternatives that you can buy today. Please keep in mind that this is not an in-depth review of all these gimbals. The purpose is to show you some alternatives and to point out that the new design of the Ronin-S does not block the screen of your camera whereas these three stabilizers all do.

First of all Zhiyun with the Crane V2 ($449 at Amazon or $399.99 at B&H) and the Crane 2 ($749 at Amazon or B&H). Both models are excellent stabilizers at very competitive price points. Especially the Crane V2 is offered at a very attractive price but its features are much more limited than the Ronin-S. The Crane 2 seems to be more comparable as it comes with an OLED display and offers a dedicated follow-focus dial. Although for now, the dial only works with Canon cameras. The expectation is that the follow-focus will work with more cameras from other brands in the near future.

The Moza Air from Gudsen is another alternative to the Ronin-S. It is priced at $599 (or $719 with thumb controller). The Moza Air comes with additional accessories such as the Dual Handle Set but it seems to lack more important features such as follow-focus and camera integration that displays the camera’s settings on a small screen on the stabilizer. It supports the same camera’s as the Ronin-S and the Moza Air can be bought today directly from the manufacturer’s website for $599 or at Amazon or B&H for the same price.

The Feiyu-Tech is a similar pistol grip gimbal. It is a simpler stabilizer, comparable to the Moza Air. It does not have a display, nor does it offer any follow-focus features. However, it does come with a single or dual-handle grip. You can buy it from the manufacturer directly for $639 for the single-handed grip or $799 for the dual-handle grip. You can get it on Amazon as well for the same price.

The gimbal design of the Zhiyun Crane 2, the Moza Air and the Feiyu-Tech a2000, all block your view of the camera display.

DJI has not yet announced the pricing for the Ronin-S but we expect them to do so within the coming weeks. We also expect DJI to price the Ronin-S very aggressively like they have done with other products, such as the Osmo Mobile 2, where they’ve cut the price by more than half to $129. Or the agricultural drones, recently introduced in the Chinese market, that DJI priced 12% lower than their predecessors and three to four times less expensive than the competition.

So for DJI to price the Ronin-S competitively, it would have to be either around the $650 to $750 price range. Or if DJI really wants to change the game, the Ronin-S would have to be priced below $600. I’m curious to see what they will decide. As soon as we find out we will let you know on this website.

DJI’s Ronin-S will be available in the second quarter of 2018 from dji.com, DJI Flagship Stores, DJI Authorized Retail Stores, and DJI Resellers worldwide.

If you happen to be at the CES 2018 event in Las Vegas, you can view the Ronin-S at the DJI booth located in the Las Vegas Convention Center South Hall, Level 2, booth #26002.

The DJI Ronin-S is very attractive in my opinion. Mostly because of its ability to communicate with your camera, the follow-focus accessory and the fact that the gimbal does not block your camera’s display. If DJI decides to undercut the competition and price this stabilizer below the $600 price point, I think it will truly be a gamechanger. I was about to pull the trigger on the Zhiyun Crane 2 myself recently but now that the DJI Ronin-S has been announced, I will probably change my mind. Hopefully, DJI will announce the pricing soon as I can’t wait to get my hands on one.

The DJI Ronin-S has been announced and we've got a first look at how it works and what it can bring to your shoot!
Check out this short video about Ronin S and find more information on our website at https://t.co/RKiyBkWnSO pic.twitter.com/NEkOP4yHSs