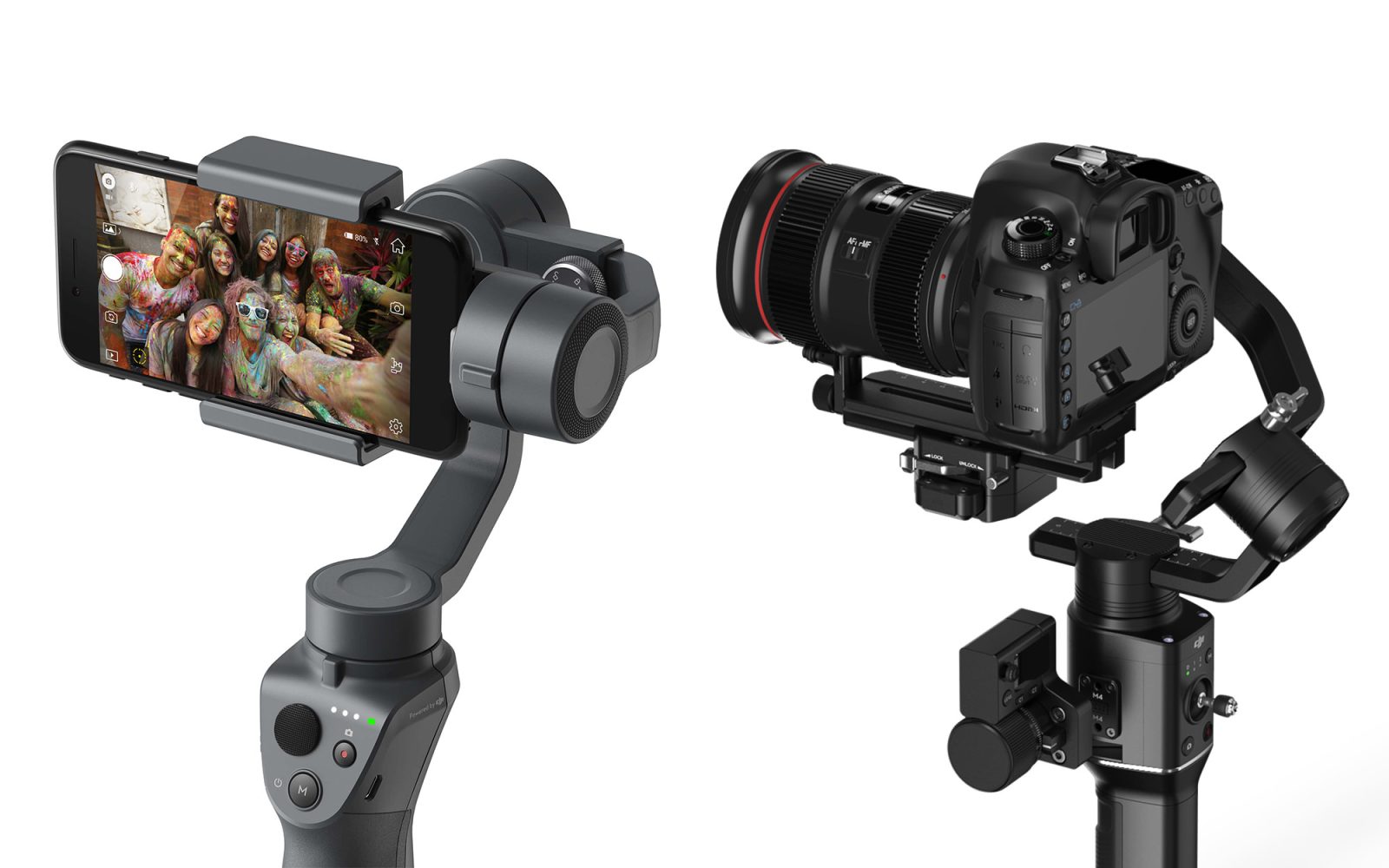 Chinese drone manufacturer, DJI just released two new products right before the start of the Consumer Electronics Show (CES) in Las Vegas this year. The first is the redesigned Osmo Mobile 2 for smartphones, which will initially be exclusively for sale at the Apple store online. The second is the all-new Ronin S stabilizer for mirrorless and DSLR cameras.

The redesigned Osmo Mobile 2 turns your smartphone into a stabilized camera. It now features an integrated battery with up to 15 hours of shooting, over three times longer than the original Osmo Mobile’s battery. It also comes with a new button layout that should make it easier for you to control and aim your phone while shooting. The new Osmo Mobile 2 is noticeably lighter than its predecessor and can now hold your phone in portrait mode as well. More details will follow in a separate post soon.

The DJI Osmo Mobile 2 will retail for $129 USD and will be exclusively available for pre-order at apple.com on January 23rd. Starting in February it will also be available at store.dji.com, DJI Flagship Stores, and DJI Authorized Retailers.

For more information on the DJI Osmo Mobile 2, click here.

The Ronin S is DJI’s completely new 3-axis stabilizer for both mirrorless and D-SLR cameras available in two sizes for either camera system. It competes head-on with for instance the Zhiyun Crane models. The Ronin S works with most camera lens combinations such as the Canon 5D, Panasonic GH, and Sony Alpha systems. The Ronin S features dedicated control buttons for the camera and gimbal and lets you toggle between SmoothTrack settings, record and stop the camera. A high precision joystick, similar to the ones you find on your drone controller, allows you to aim the camera quickly and accurately. The Ronin S also features a Sport mode for fast moving subjects and other intelligent modes such as Panorama, Hyperlapse, Track and CamAnchor

Special accessories for the Ronin S will be available, for instance, a Focus Control Center, allowing you to accurately adjust your focus, a vehicle mount solution, DJI Master Force, DJI Master Wheels, an external focus motor, and a cheese plate adapter so you can use your favorite third-party accessories.

Ronin-S will be available in the second quarter of 2018 from dji.com, DJI Flagship Stores, DJI Authorized Retail Stores, and DJI Resellers worldwide. Pricing will be announced prior to availability. Additional information on Ronin-S can be found at www.dji.com/ronin-s.

“With the introduction of these two stabilizers, DJI now offers gimbal technology to help unlock the creative storyteller in everyone no matter what camera they’re using,” said Paul Pan, Senior Product Manager at DJI. “Osmo Mobile 2 offers the best in smartphone stabilization at an affordable price, and Ronin-S brings the quality of DJI’s professional gimbal technology to a new form factor that is perfect for run-and-gun filming using your favorite DSLR or mirrorless camera system.”