Vaccines delivered by drone in island nation of Vanuatu 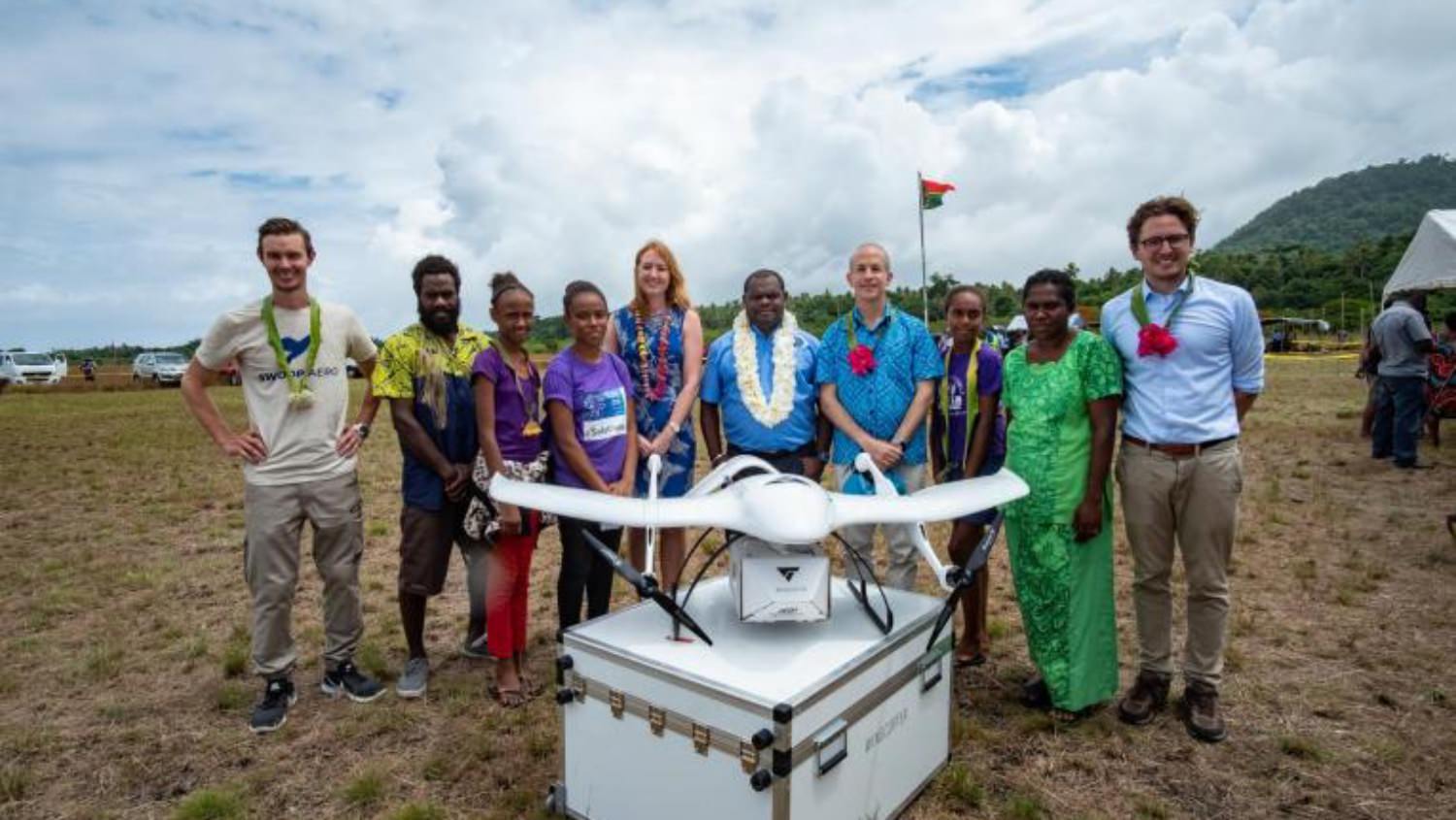 Deliveries by drone are making progress around the world. More so than here in the US for now, but hopefully, that will change soon. In the island-nation of Vanuatu, vaccines were delivered by drone this week. Many of the villages spread out over the various islands are so hard to reach that about 20% of the children miss their shots. Drones have shown to be a viable solution to this problem, making Vanuatu the first nation in the world with a childhood vaccine program that is officially drone-dependent.

Transportation of any goods is both expensive and difficult in Vanuatu, an 83 island nation that covers 1,000 miles. Rough seas can prevent the narrow skiffs from making safe trips between the island. The high costs of such trips also make a childhood vaccine program costs prohibitive. These and other factors result in roughly 20% of the 35,000 children under the age of five not getting all the shots they need.

“Vanuatu’s development plan, while setting out a vision for a stable, sustainable and prosperous country, demands innovative ways to reach children living in communities on remote islands,” said Prime Minister Charlot Salwai Tabimasmas. “It is a proud day for Vanuatu to launch these drone trials using commercial contracts, which will aim to bring life-saving vaccines to our children,” he added.

Vanuatu together with UNICEF, the Global Fund to Fight AIDS and the Australian government started their vaccines delivered by drone program to change this situation. The drone delivery service will start with flights to only three islands but will be expanded to many more soon.

“Through the Australian Government’s Department of Foreign Affairs and Trade (DFAT), the innovationXchange is pleased to partner with the Vanuatu Government and UNICEF in trialling innovative technologies to solve significant health challenges in Vanuatu,” said Dr Sarah Pearson, DFAT’s Chief Innovation Officer. “We look forward to learning from this trial and understanding how the use of drones could help prevent disease in a cost effective manner particularly in a challenging environment such as Vanuatu,” Dr Pearson added.

The vaccines delivered by drone covered 25 miles over steep mountainous terrain from Dillon’s Bay on the west side of the island all the way to remote Cook’s Bay on the east side. The 55-year-old registered nurse, Miriam Nampil was able to vaccinate 13 children and five pregnant women in the small community that does not have a healthcare center, electricity, and that is only accessible by boat or on foot. 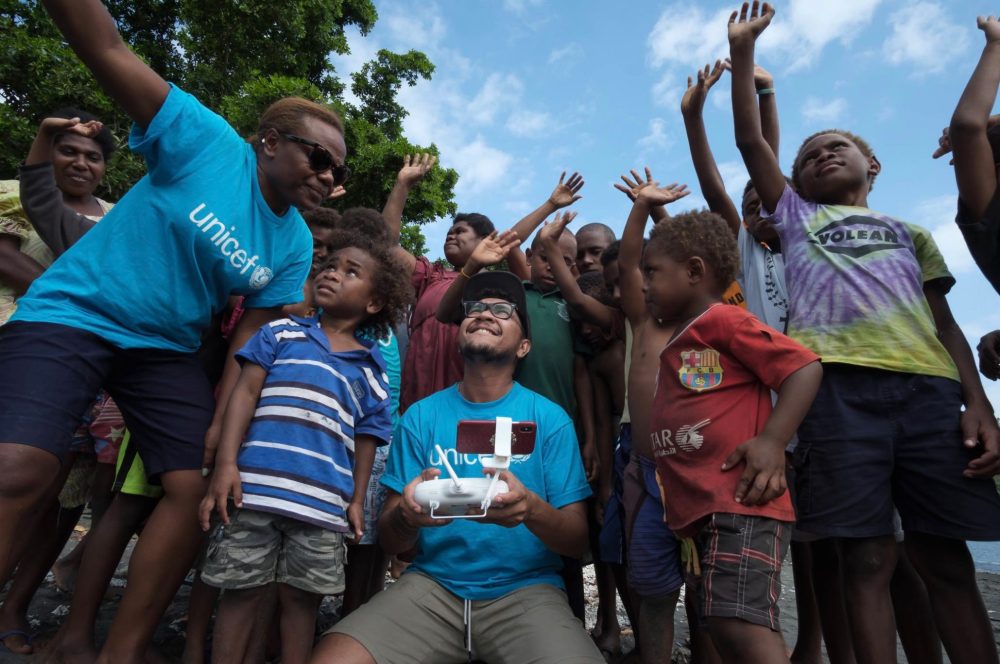 “This drone will change my life. Normally, I must trek about two hours over the mountain each way, and the vaccine carriers are heavy.”

Much of the on-island transportation takes place by foot and because of the frequent rainfall, these trips can take up a lot of time.

The drone that is used for the vaccines delivered by drone program in Vanuatu, is from the Australian drone company Swoop. They have developed a fixed-wing VTOL (vertical-take-off-and-landing) drone with an eight-foot wingspan that can fly up to 60 mph at a maximum altitude of 500 feet, withstand rain and winds up to 30 mph and make deliveries within is six-foot wide landing zone. the Swoop developed drone uses the Iridium satellite network and can this be flown anywhere in the world. Yes, that is very impressive indeed. 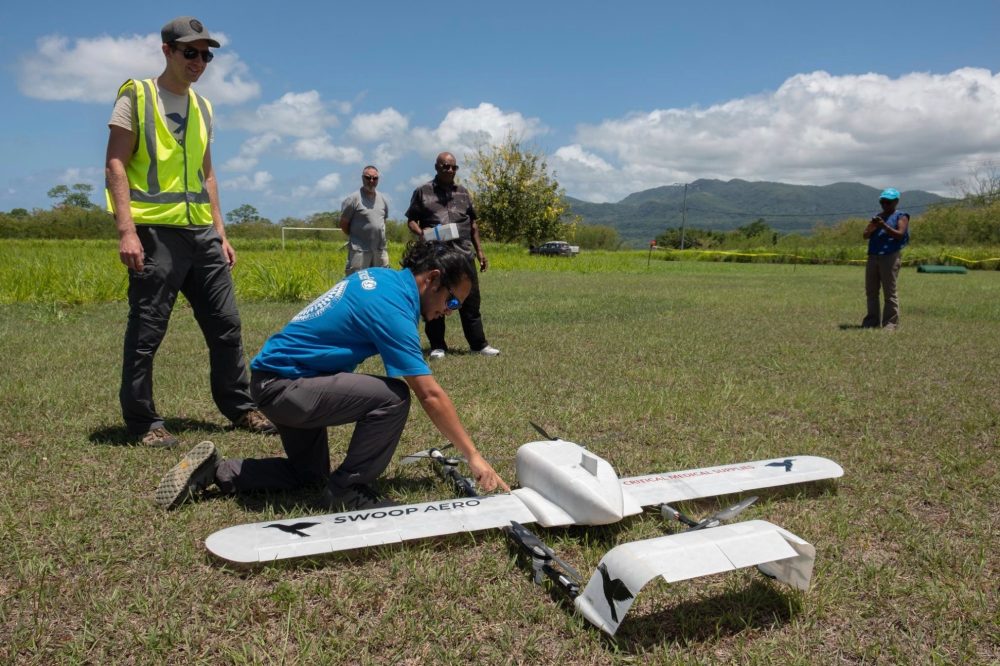 The engine is mail-ordered from Swoop directly, but the wings can be 3D-printed. Local drone pilots will be trained directly by Swoop. The vaccines are carried in styrofoam boxes packed with ice and electronic monitors to make sure that the payload never warms up too much in the warm environment.

Besides vaccines delivered by drone, we have seen deliveries by drone take off in recent years in a number of developing countries. Typically the airspace is less crowded in these locations and the laws and regulations are less stringent. One of the most successful large-scale drone operations is operated by Zipline in Rwanda. With over 8,000 drone flights this San Francisco-based company has shown what can be achieved with unmanned aircraft delivering blood and medications. Contrary to Swoop’s drones, Zipline’s aircraft are not VTOL capable. Instead, they are launched from a catapult and drop their deliveries from the sky. A slightly different approach but very successful nonetheless.

Another interesting example, closer to home for many of our readers, is the drone delivery test that took place in the U.S. in which a kidney was successfully delivered.

You can read more about other drone delivery programs here:

What do you think about drones making deliveries? Let us know in the comments below.